Look, Matt and I would never claim to be parenting experts, or even people who should be giving advice. Nearly two years in, we still make mistakes on a daily basis and I don’t see that changing any time in the future. I’m not sure ANYONE is qualified to give parenting advice. The whole racket is complex and ever-changing and impossible to master.

However, Dexter is a pretty great kid, so far, and although I’m convinced it’s about 90% luck, I’d like to think we had a little something to do with the other 10%.

New parents get a flood of parenting advice, and thousands of conflicting opinions can be yours with just a quick Google search, so we did (and still do) put some effort into deciding how we wanted to try to do things and what kind of parents we’d like to be.

Some of that advice, and some of those decisions with Dexter, turned out to be really successful, so we thought we’d share what we think worked the first time around so well that we’ll attempt to implement it for Round 2. Maybe this will help some new parents feeling flooded by feedback narrow things down.

Make noise during newborn naps. This tip is courtesy of our friends DA and Soroya, who told us about it when they brought their new little girl to Orlando. She was zonking out and Matt and I automatically went into shush mode, but DA encouraged us to keep up a normal level of noise, as they’d been doing it from the start and their baby would sleep through anything. Dexter isn’t quite that heavy of a sleeper but I do think it’s good advice which will be even better with a noisy toddler running around.

Start sleep in rocker, in parents’ room. There are as many sleep 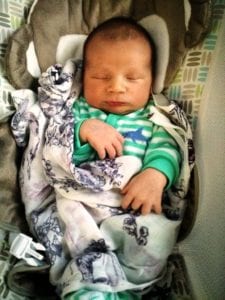 methods (and jerks judging sleep methods) as there are stars in the sky. Plain and simple, when Dexter was born, Matt was too nervous to co-sleep, but I wanted him nearby for ease in night nursing. For the first 4-5 months, he slept in a Rock-n-Play by my side of the bed. If he cried, I’d either grab him to nurse (in the beginning) or try to rock him back to sleep (later, as we were trying to get him to sleep longer).

DISCLAIMER: The Rock-n-Play isn’t meant for overnight sleeping, so says the American Academy of Pediatrics, so if you are considering using it for that purpose, please do your research. However, it was ideal for us, our goals, and the temperament of our kid. We’ll likely start there next time around, too.

Pass that kid around! Inspired by my sister, who once told me “I don’t want one of those kids who will only hang out with mommy,” and I instantly thought, “I DO NOT WANT THAT EITHER,” and therefore, Dex was held by many others, early and often. Honestly, it’s not like we had a choice. From family reunions to derby bouts, there were constantly people clamoring to hold that charming little bugger. I’m going to have to foist Cricket onto British strangers. That won’t be awkward at all.

Sleep training. Whew, you thought the Rock-n-Play was controversial? Strap in. We sleep trained Dexter, doing a modified cry-it-out method, at seven months. There is a lot to say about why we

chose the method we did, when we did, and why we believed it worked, and I will write that post up in its entirety, one of these days. What I will say now, though, is that Dexter is nearly two years old and since we sleep trained, he has slept an average 12 hours a night, every single night, and takes long, regular naps. I just paused typing to knock the wooden table next to me, because it’s common for kids to regress around 2 years old and also when a new baby comes into the picture, but here’s hoping we’ve established a solid foundation for self-soothing and sleep that will keep him the rested and happy kid he is right now.

Opt out of eating-related stress. It seems to be trendy now, to engage in excessive hand-wringing over how much kids eat. We decided early on we’re just not going to do it. Children will not starve themselves to death. Arguments over food just end with tears and frustration and not with full, satisfied bellies, because you simply can’t force a kid to eat. Dex eats what we

eat, cut up or otherwise prepared appropriately, and if he doesn’t want to eat it, that’s okay. We make one concession – he can have as much fruit as he wants after a meal is “over.” And we make occasional adjustments – for example, for a while there we were giving him each part of the meal separately because otherwise he’d eat his favorite part and ignore the rest, and we decided to stop doing that and try to teach him to eat a normal, multi-side meal. He has a nap right after lunch and goes to bed right after dinner, and a cup of milk is part of his pre-sleep routine, so even if he doesn’t eat, he gets a belly full of warm milk to help him sleep. And that’s that. (Side note: if you’re going to have a kid, you have to accept that you’ll waste a lot of food. I mean, A LOT OF FOOD. The waste is honestly what I struggled with the most, but since I’ve accepted it, it’s much easier to relax.)

Bringing Up Bebe-style boundaries. There were two books I asked Matt to read while I was pregnant with Dexter: Nurture Shock and Bringing Up Bebe, because I liked what both had to say about how to approach parenting. (Ha, how appropriate that I was inspired by a French parenting book and we ended up in Europe, ourselves? Didn’t think about that until just now.) There is a lot of bullshit in Bebe, but what I starred is the concept of setting boundaries and then giving kids freedom to do all their little weird kid things, within those boundaries.

Our boundaries primarily involve safety and respect. Obviously, we enforce rules designed to keep Dexter safe, like no playing around when going up/down the stairs and he has to hold an adult’s hand when walking along the street. But I’ll confess, even within the safety boundary – like, I’ll let him fall down, if I can tell he won’t hurt himself and he’s doing something stupid. Boundaries based on respect are  focused both on people and property, so we don’t let him, say, color all over the walls and I’m as much of a stickler about table manners as I can be with a not-quite-two-year-old. Matt and I also check in with each other on this, because it’s easy to get carried away with corrections. “Why do you care if he does that?” is a common question, and if it turns out it doesn’t really matter? We let it go.