At 21 months old, Dexter will spot a photo of himself and say, “Cute!” That is clearly Matt’s and my fault. We are ruining him. He loves the bus, riding it, talking about it, signing it, and pointing out a bus whenever we see one, with great excitement. Dexter doesn’t just care for his Fake Baby Brother – most of his toys get to share his milk and his water and his love. I’ve seen him give his toy car the paci before. (Hey, it has a mouth.)

Dexter has officially done that thing parents talk about, wherein by imitating mom or dad, the kid points out something the parent didn’t even realize he or she does. In our case, whenever we try to Facetime someone and they don’t pick up, I apparently say, “Nope!” because now Dex does, too, every time.

I sure hope you like this face, because he’s decided it’s what a smile is, and makes it any time anyone says the word “smile” or points a camera in his direction: 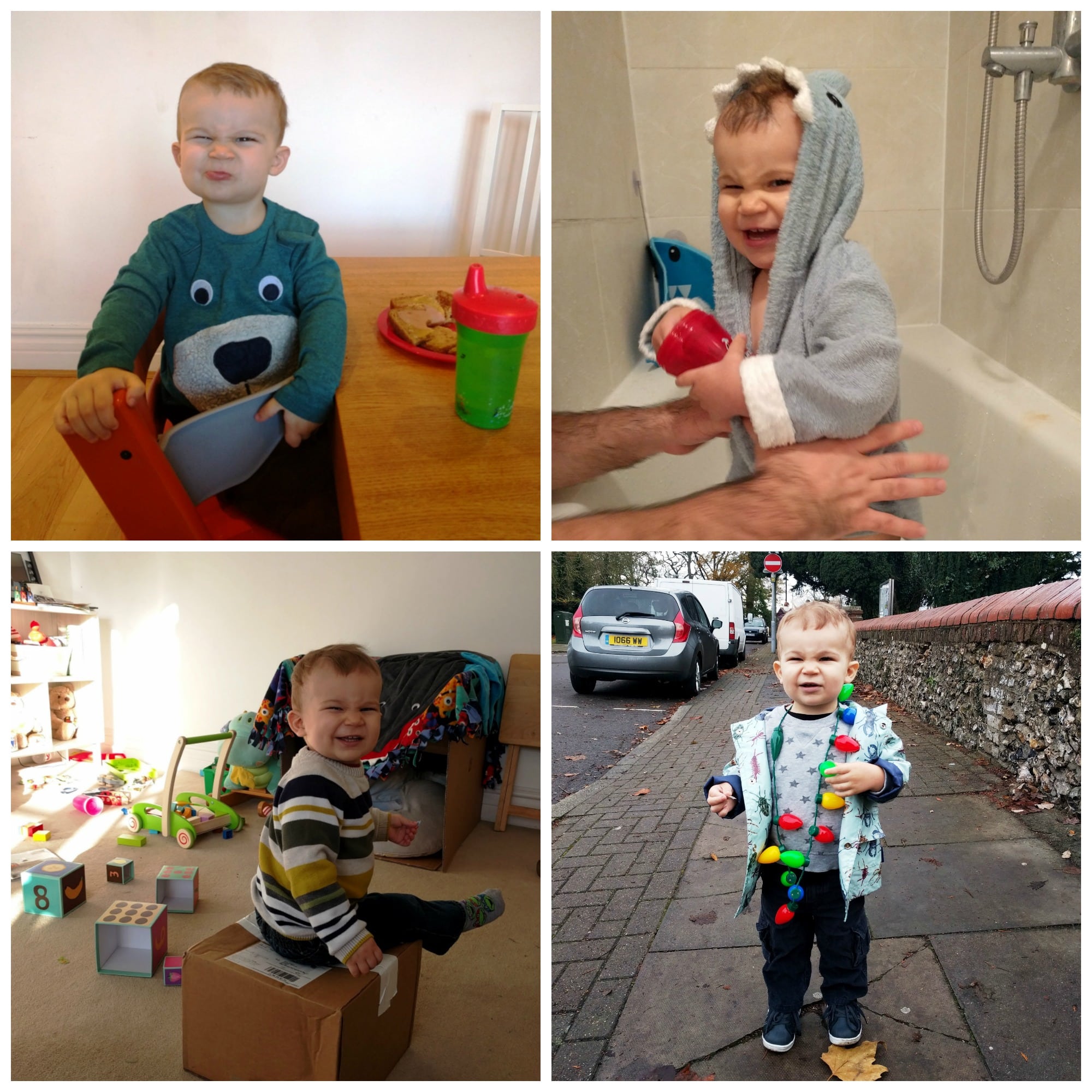 Dex counts to five with some assistance, and insists on getting a high five when done.

Speaking of, he’s been coming around for high fives at Tumbletots, after finishing an apparatus, but last week decided celebrating with Mommy isn’t enough and ran around gathering high fives and accolades from the coaches and other moms. They were mostly confused.

Dexter can officially jump, now. He gets about a millimeter off the ground but we all start somewhere.

About a month ago, at playgroup, Dexter brought me a toy stethoscope. I showed him how to put it on and how to listen to a heartbeat. The whole exchange took about a minute, and then everything went on holiday break, no mention of stethoscope again. Until we went back to playgroup Monday, and Dr. Dex brought it over, pressed it to my chest and said, “Blub blub blub.” I was genuinely gobsmacked.

Dex is pretty obsessed with stickers. He just peels them off the paper and sticks them to the front of his shirt, over and over and over again. Sometimes he’ll put one on me, or lift up his shirt and put it on his belly. Mrs. Claus might have gone crazy and bought a 2,000 stickers book because it was only 2 quid. All we do is pick up stickers from the floor and throw them away. Dexter also really enjoys the Legos and train set he got for Christmas. All the new stuff he got for Christmas, really. Turns out, toys are fun. Stop the presses.

I like 21 month old Dexter. He’s increasingly verbal. Sometimes it’s a running commentary of nonsense as he plays, but he’s steadily getting better at communicating and it’s amazing to witness. He’s still my anti-snuggling kid, but he’ll go through days where every soft bump is an “ow!” and requires kisses, which I happily oblige.

The other day, he and Matt are playing in the living room while I make dinner. I hear Matt ask for a kiss, and the next thing I know, Dex is running toward the kitchen, yelling, “Mom! Mom!” He leans over the gate and makes his kissy noise, raising his head up for a smooch.

I guess he wanted to make sure Mom wasn’t left out. I smile every time I think about it.