Then, the Gang started their initiation rites. Their cribs at daycare have clear plastic ends and each one is decorated with a star-shaped nametag and photos of their family members. In a clear pledge of solidarity to the Gang, the members each tore their nametags and photos off of their cribs. A little dark but hey, kids will be kids. Then, they started doing it to the other babies, which I can only assume is the Furniture Pushin’ Gang’s equivalent of tagging their territory.

Before the gang warfare could get too out of hand, most of the Gang members moved over to the Toddler Patch, where they were no longer the biggest brutes in the room. We parents of Gang members breathed a sigh of relief, until…

Yesterday, when I went to pick Dexter up and he had a teardrop tattoo. 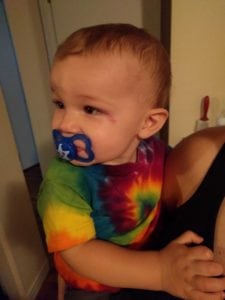 That mark on his eye was, however, the second day in the row I had to sign an incident report at daycare. Day 1, they called me (and seeing the daycare on my Caller ID is a pretty dreadful feeling because it’s not like they call you to say, “He’s doing great! Ate all his veggies!”) and told me while he was walking around, he fell and banged his head on a bookshelf and had a pretty good bump.

When I got there, it was so much worse than I imagined. Seriously, it was way bigger and purpler than I expected, but he was acting like nothing was wrong so home we went. The next morning, it had disappeared.

Posit: Dexter may be Wolverine?

Then came Day 2, no phone call this time but as soon as I saw him at pick-up I cried, “What happened to your eye?!” and the teacher sheepishly handed me Incident Report #2 to sign. Another tripping accident while walking.

He also is more comfortable in a swimming pool and still rejects most things in marinara sauce but loves black beans and bread, and was a big hit on Taco Tuesday until he gorged himself on tortilla chips, gagged, and threw up into my hand. The kid can’t control himself around tortilla chips. Dexter survived (another) double ear infection, Mom’s work-filled Gay Days weekend and a yard sale so hot it felt like we were selling our stuff on the surface of the sun.

Dex is starting to get willful. He now notices and cares A LOT if you take away something he wants or remove him from an area where he is getting into everything and most of those things are plugged into electrical sources. It’s frustrating, because he’s old enough to be mad that he’s being redirected but not old enough to understand reason or even consequence, really. We’re just going to have to ride it out.

But Dexter also now knows how to remove his pacifier and lean in for a kiss.

So I think we’ll make it through.