It’s been a few months since my original “Toddlers Are Weird” post, but never fear, everyone: Dexter is still really weird.

First of all, on a scale of one to face transplant, how concerned should I be that last week, when we spotted a fox at least twice Dexter’s size in a parking lot, my child’s immediate reaction was to run after the wild animal and attempt to tickle it?

Dexter has something in his brain that tells him certain things are backwards, no matter how many times I tell him otherwise. He always attempts to wear sunglasses upside down and we have an unused landline phone we let him play with and he always tries to talk into the base of it.

This is the end result when Dexter eats an apple: 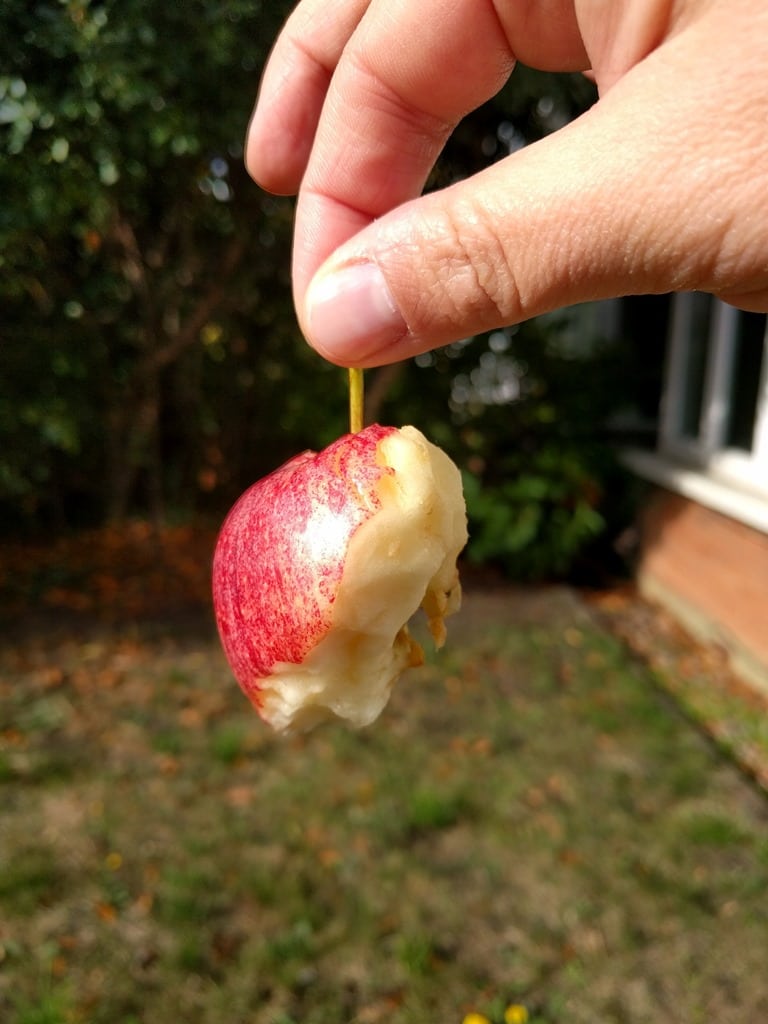 Once, he ate the whole thing. Seeds, core, all of it. No apple at all left.

Whenever he sees this painting: 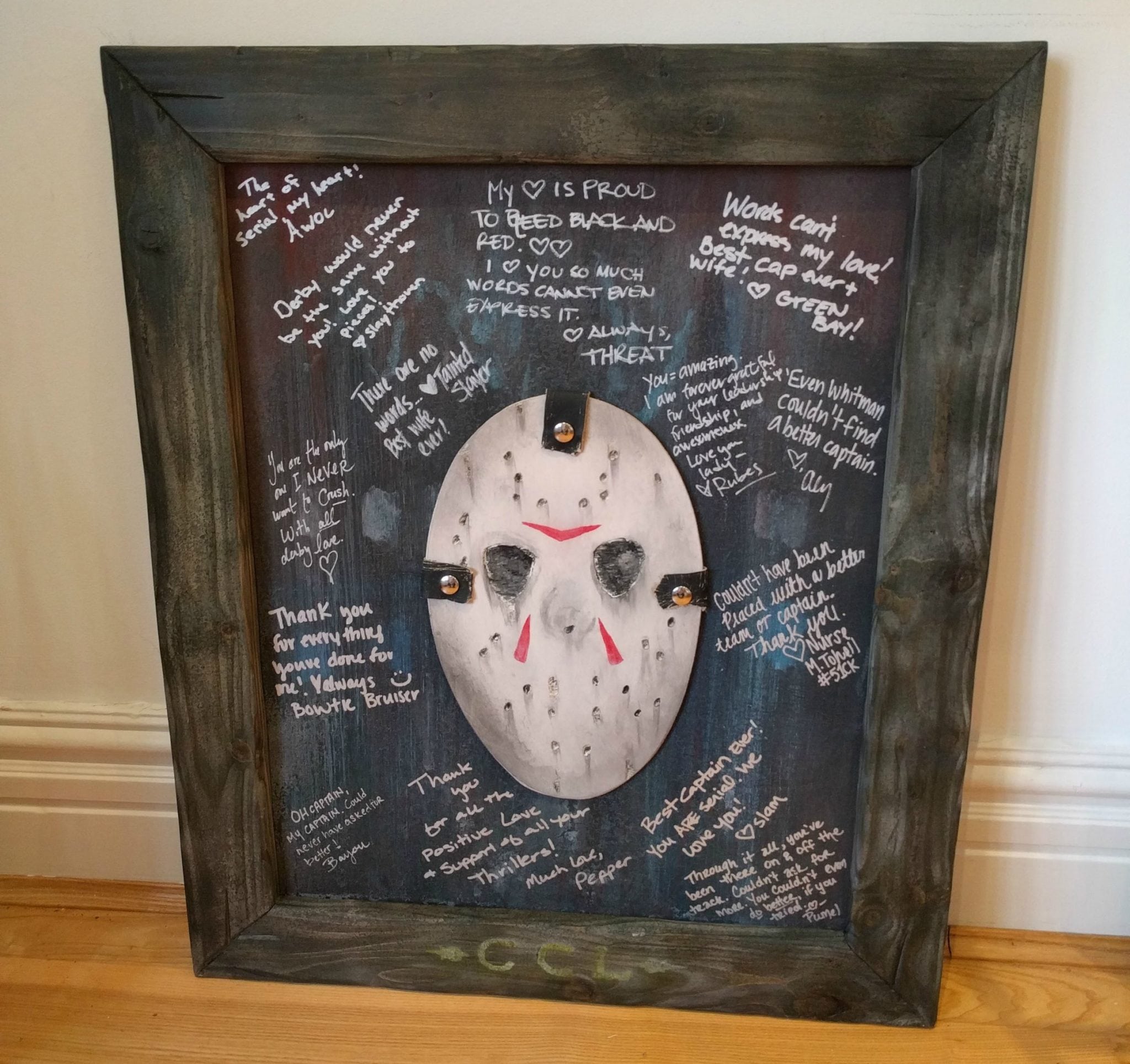 Dexter cheerfully says and signs, “happy.” I can’t decide if the image of the violent murderer makes him happy, or he somehow is mixing up the hockey mask with a smiley face, because he says/signs happy when he sees one of those, too.

Speaking of things Dex says and signs, he started frantically yelling and signing, “TREE! TREE! TREE!” during dinner the other night and it took Matt and me a crazy long time to realize he was referring to this shrapnel from his orange: 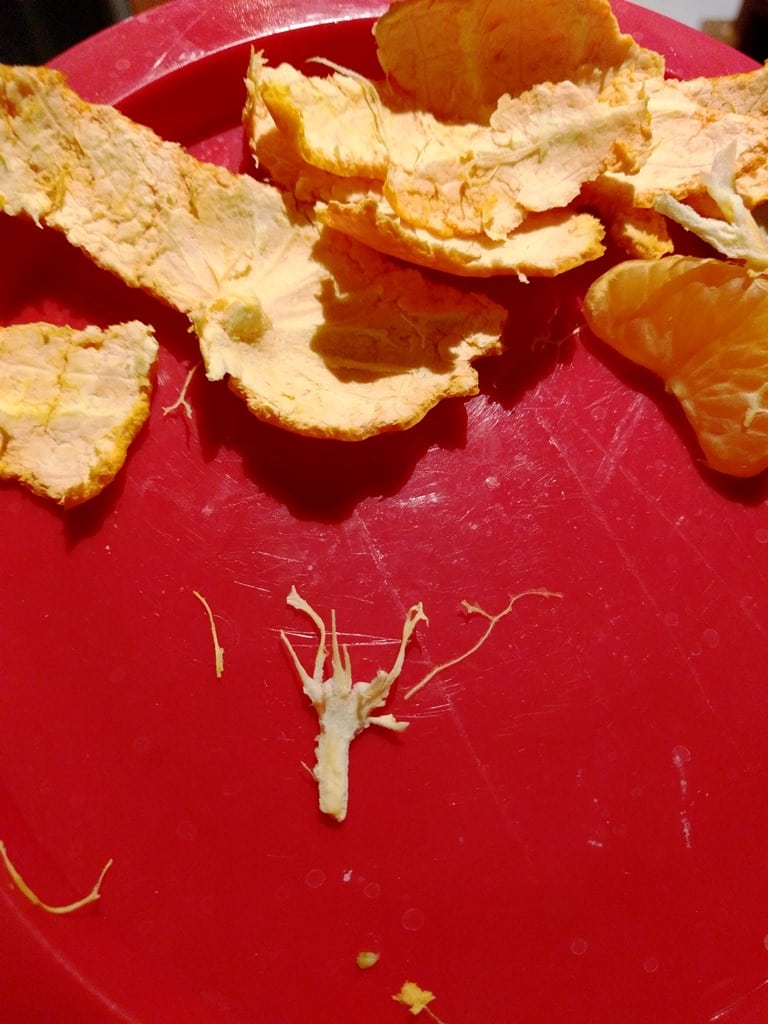 This is usually how he sleeps: 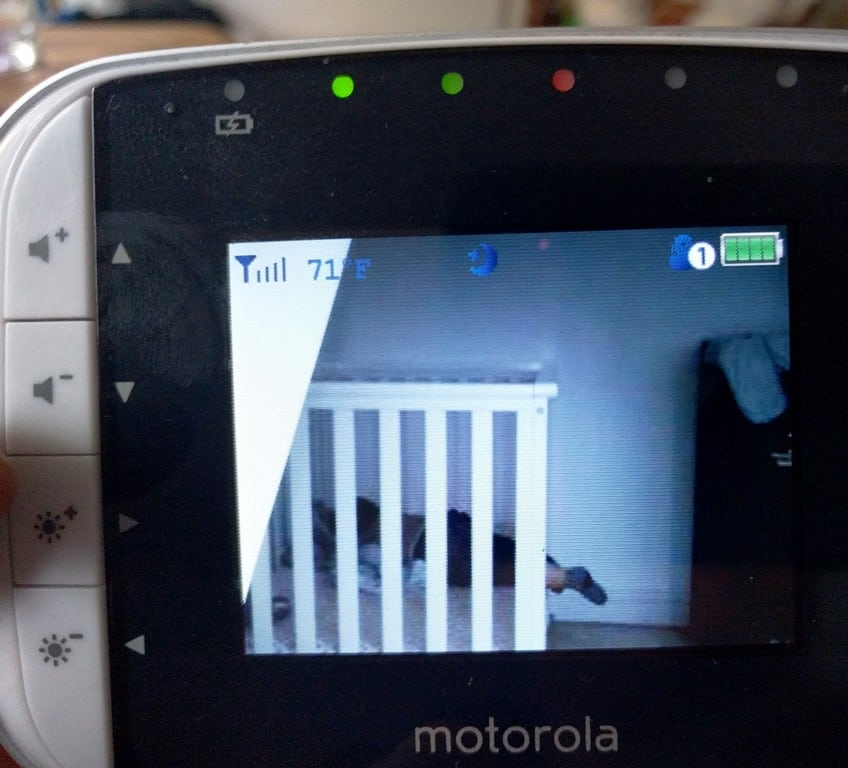 You might surmise that Dexter has outgrown his bed but you are wrong. There is plenty of space, if he’d only lay in it parallel to the mattress, rather than perpendicular, legs dangling out between the crib slats.

The other day I was actually in the process of telling Matt that I don’t know why I bother to perfectly align and toast Dexter’s grilled ham and cheese sandwich because he always eats them the same way, by pulling all the components apart and then starting with the ham and then alternating between eating the bread and cheese, when Dexter unveiled his new trick: weird little cheese shreds? 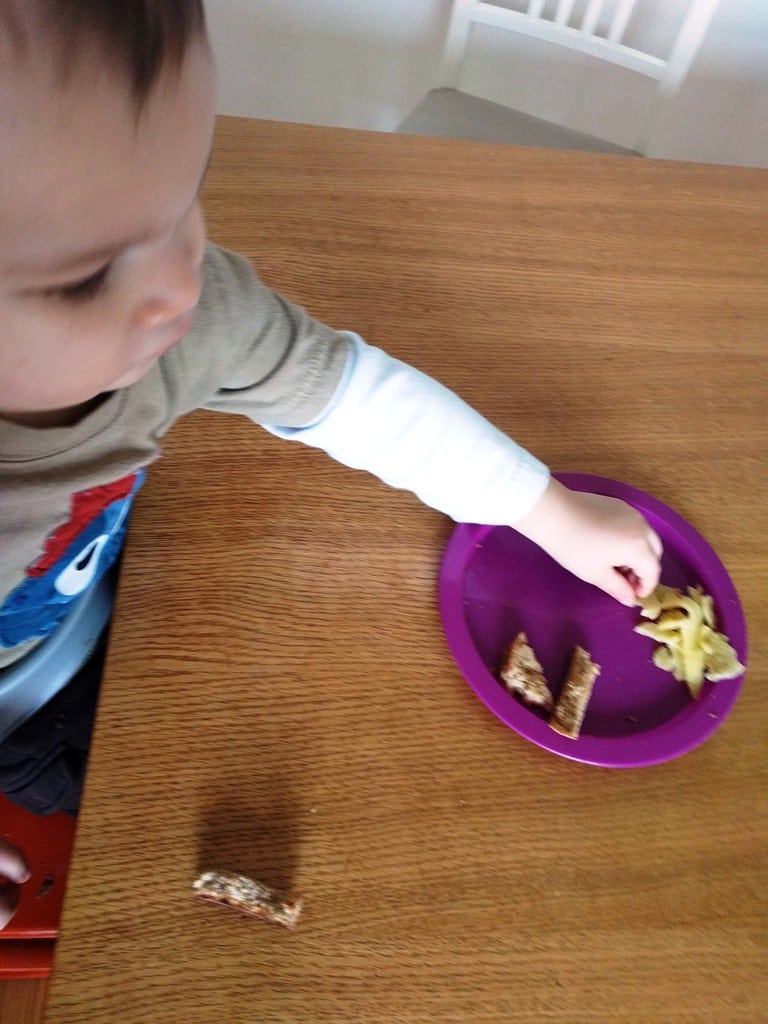 By the way, that little piece of bread off to the side is a “boat.”

I had the kid who went completely rogue during circle time at Tumbletots last week: 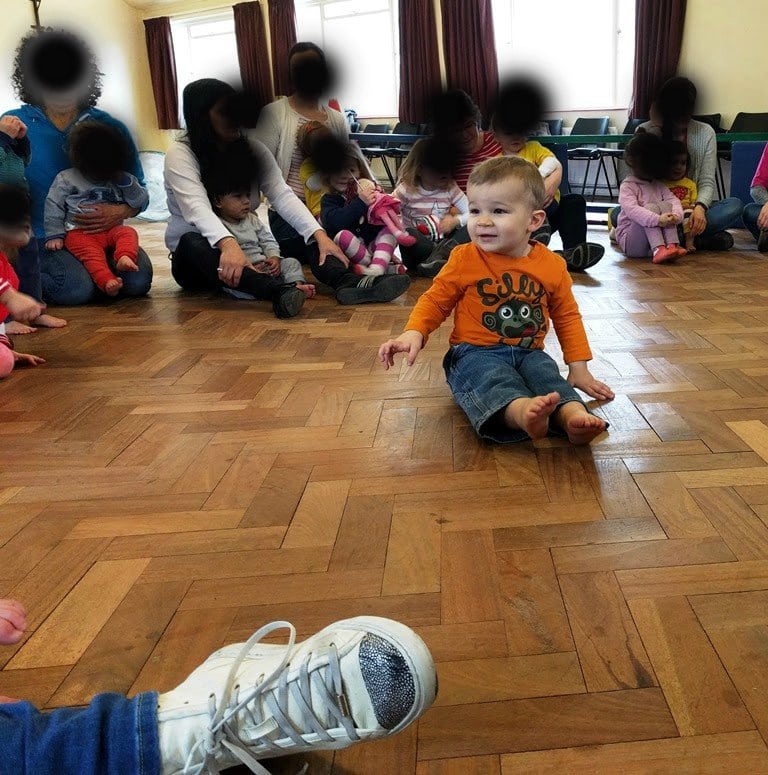 Dex spent a decent amount of time Saturday bouncing his face up and down on the sofa seat cushion. No idea why.

Do you miss those videos from when Dex was in daycare, and I’d pick him up, and he’d be so excited he’d leap into the air, over and over, in his bouncer? I bring you crib trampoline:

For some reason, he finds this whole thing really funny:

I’ve mentioned his hand-washing obsession. He’s also pretty into brushing his teeth, and once I had to quickly get into a bathroom (I’m pregnant, it happens) and I just pulled him in there with me and this is how he chose to occupy his time: 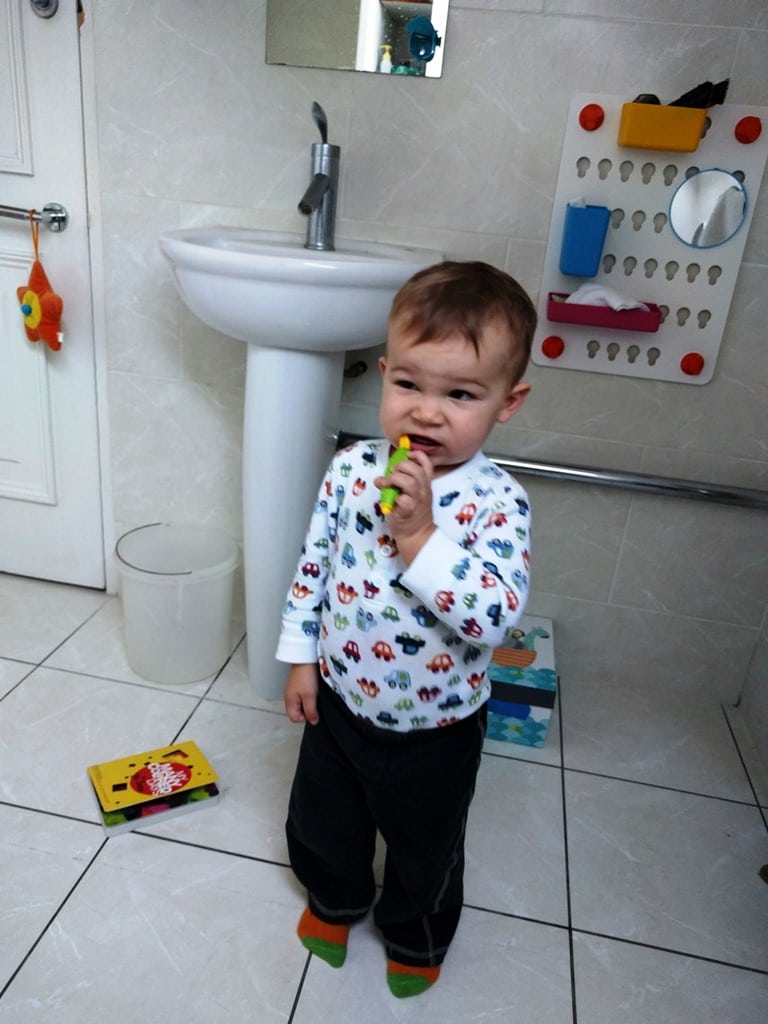 This sticker has a hat on it, so naturally… 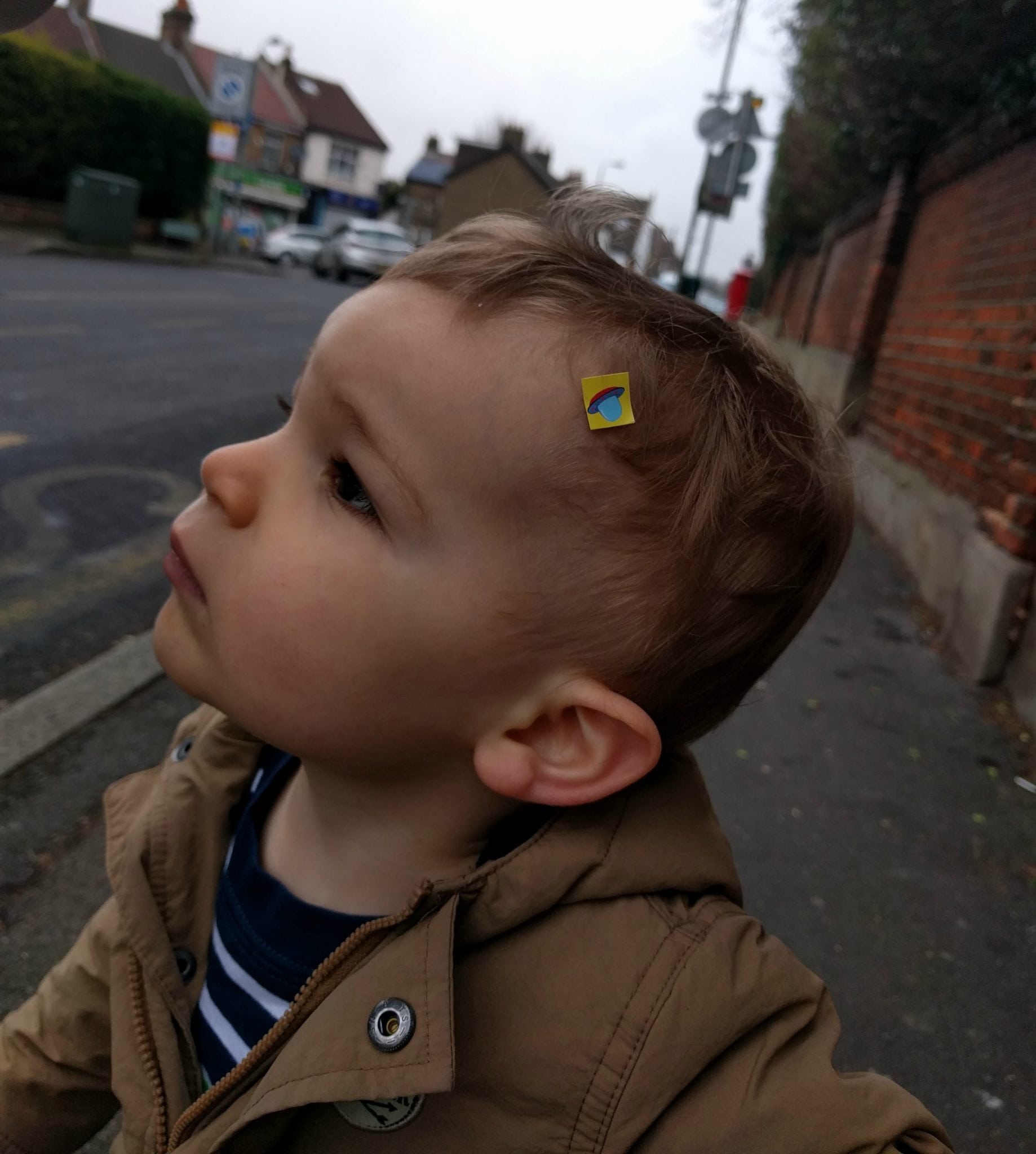 Okay, it’s not really a hat on the sticker – it’s a spaceship. But don’t tell him, because he walked around wearing his “hat” for a whole morning and that was funny.