A morning at the London Sea Life Aquarium – the second-largest aquarium in Europe! – is a bite-size, half-day outing. Which is perfect for us right now, because I can’t haul this big ol’ belly around for much more than a few hours, anyway.

The Aquarium’s location is great. We took the public transportation trifecta to get there – bus, train, tube – and then walked across the Westminster Bridge. Dexter got to see and hear Big Ben, we eyeballed the London Eye, and we all peered at the Thames, admiring the boats jetting around despite the wet, grey day.

Our timing was ideal. It opens at 9:30 on weekends (10 a.m. on weekdays), and we were crossing the bridge right at 9:30, watching the building swallow up the early bird queue. By the time we got to the doors there was zero line. Dexter got a sticker from the woman working the entrance and we waltzed right in.

Once you enter, you head downstairs – there isn’t a lot of spare space in downtown London so almost the entire aquarium is housed in the basement. 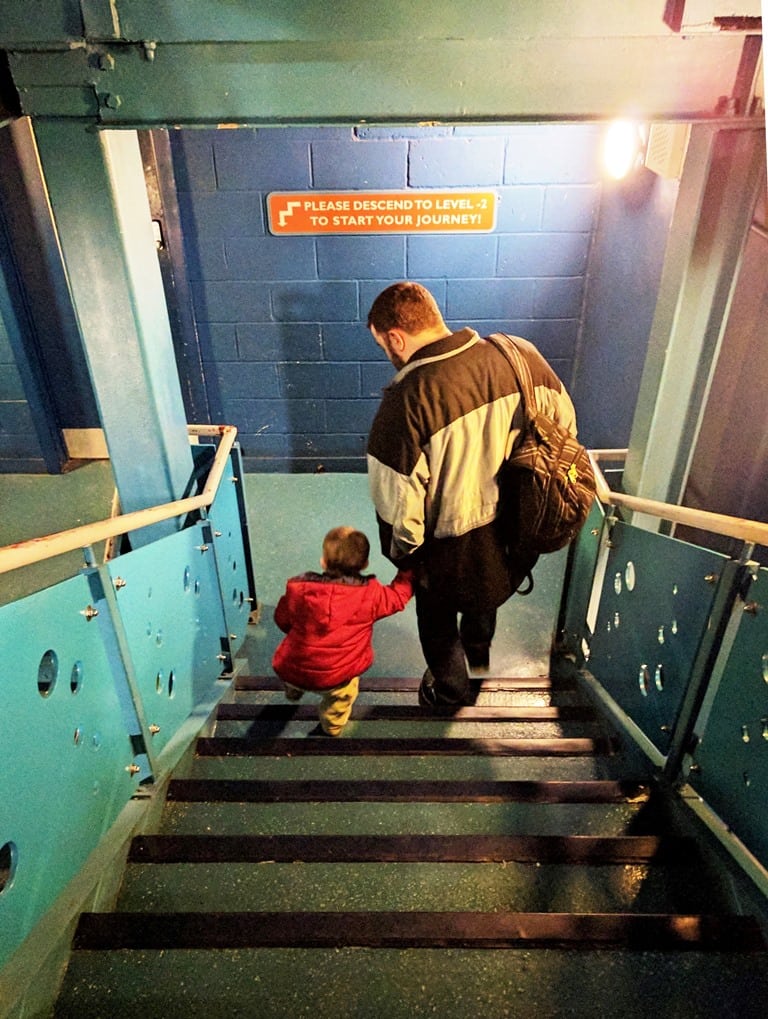 And then you follow a walking path along a self-guided exploration. When we were there, it wasn’t all that crowded – we think the weather and the early time worked to our advantage. But I could easily see how it could get hectic. 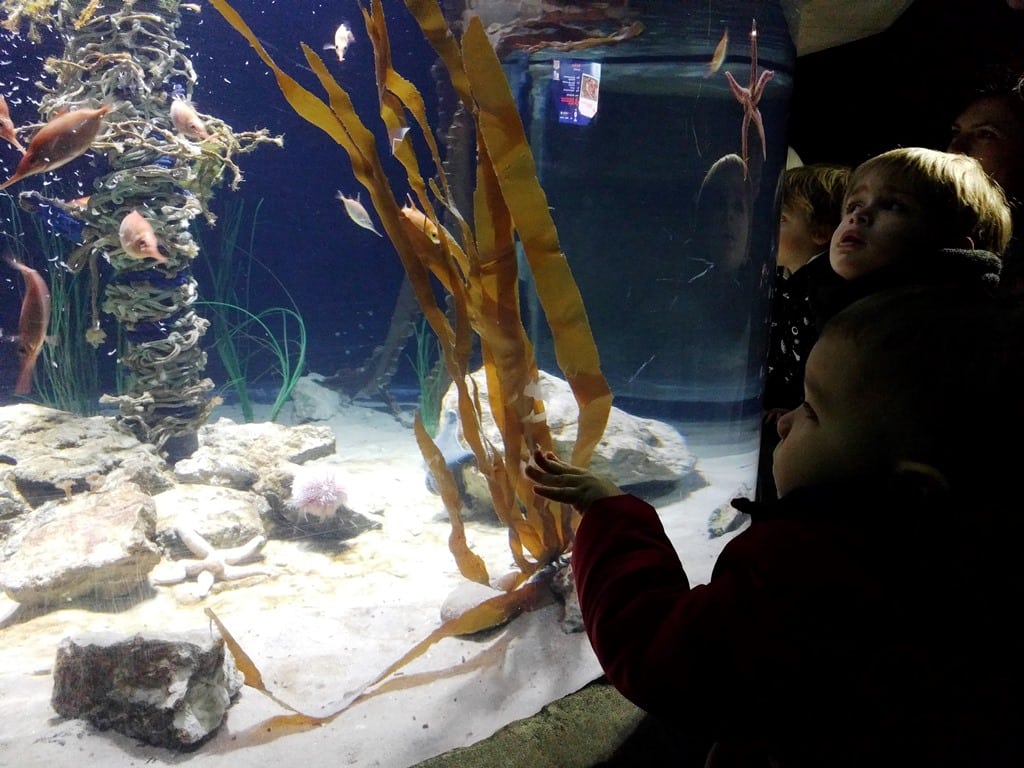 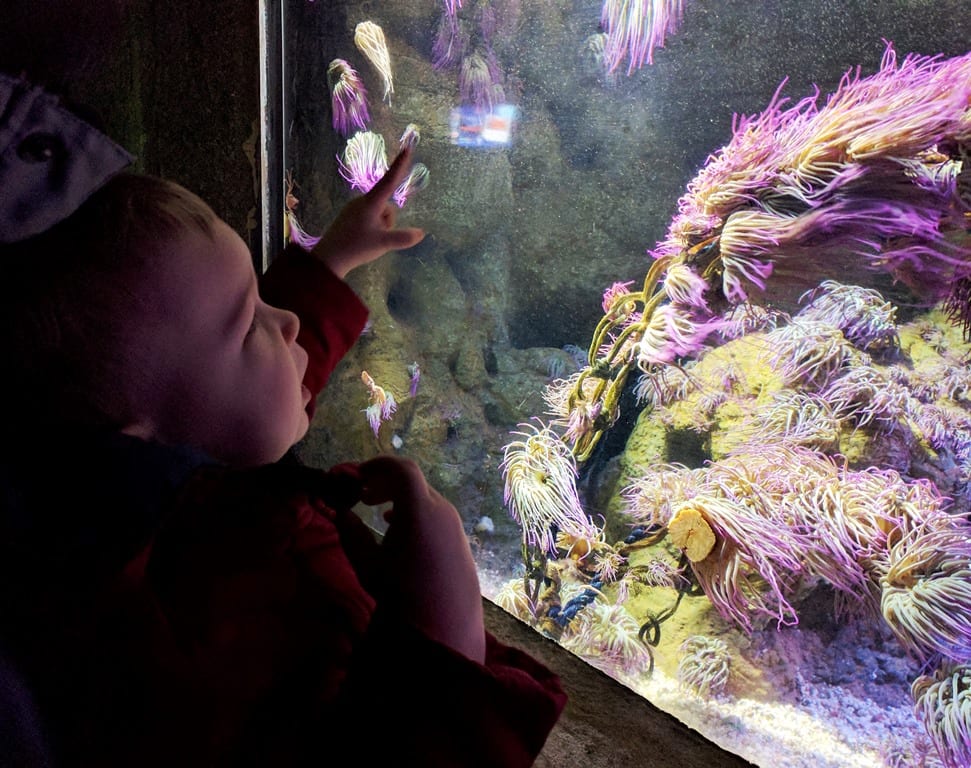 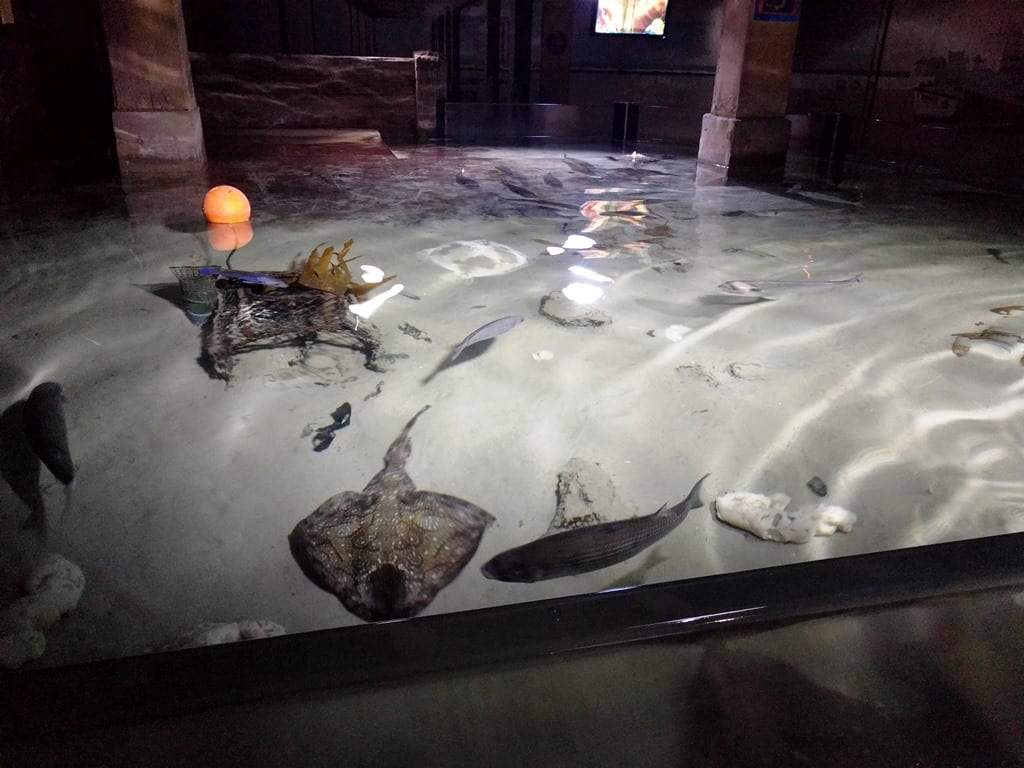 Dex got nervous, a few times, when a large fish would come right near the glass. But what REALLY scared him were these decorative fish things: 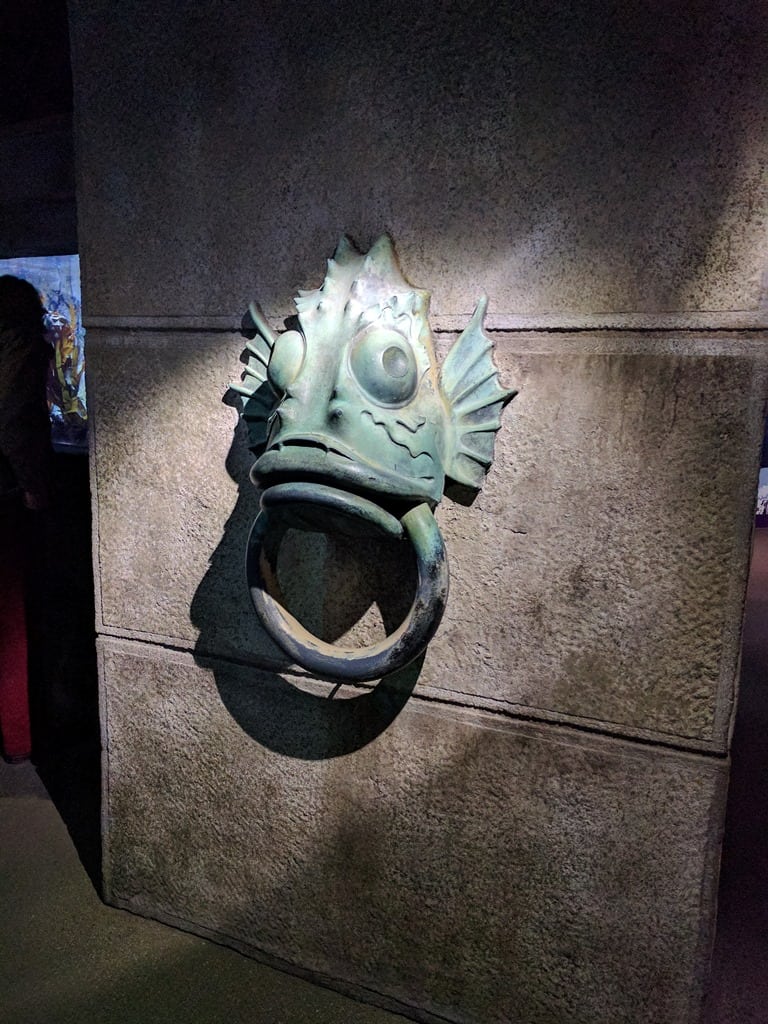 He’d cower and cling to us every time we’d walk by one, poor kid. 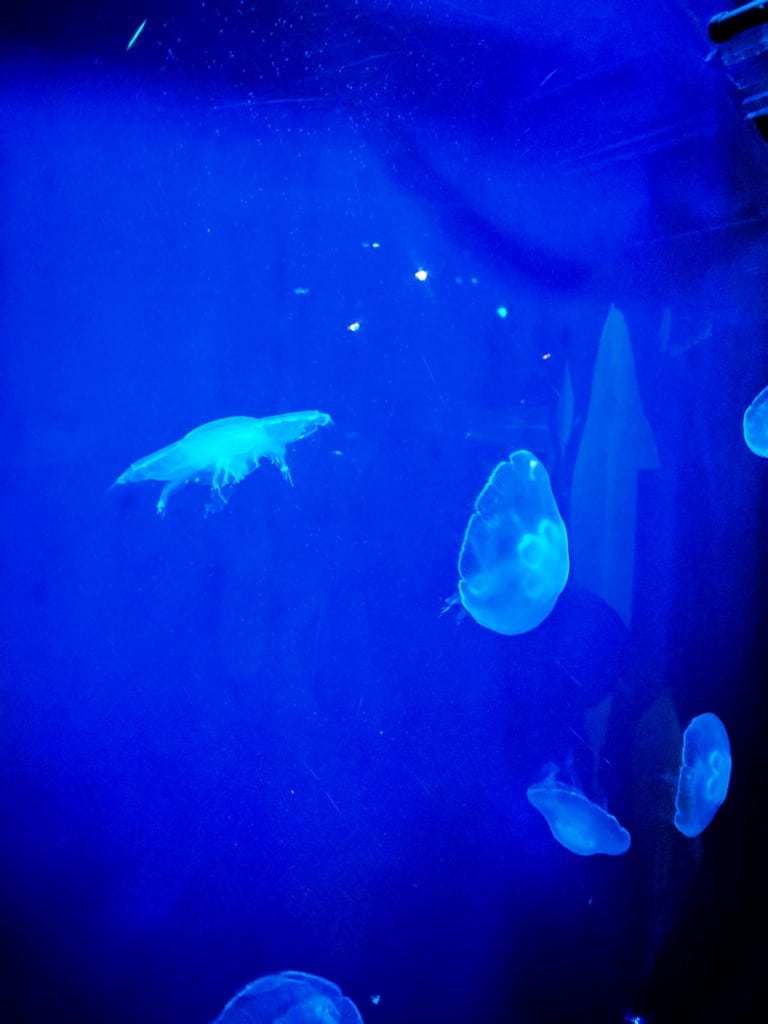 There were only a couple of small jellyfish tanks, but as we walked out, we walked through an section under construction. Apparently a big fancy new jellyfish display opens sometime this year. If it features walk-through tunnels like one of their large shark tanks did, I could see how this could be really, really cool. 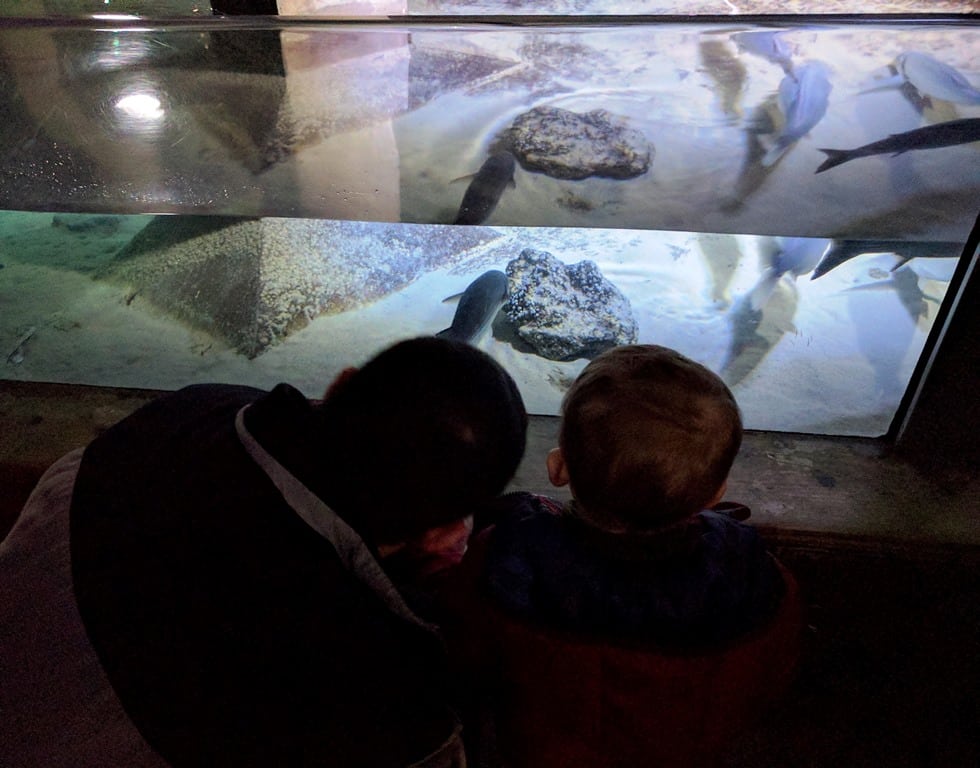 Dexter ALMOST worked up the nerve to touch the starfish. He rolled up his sleeves, climbed the ledge, then couldn’t quite bring himself to do it. 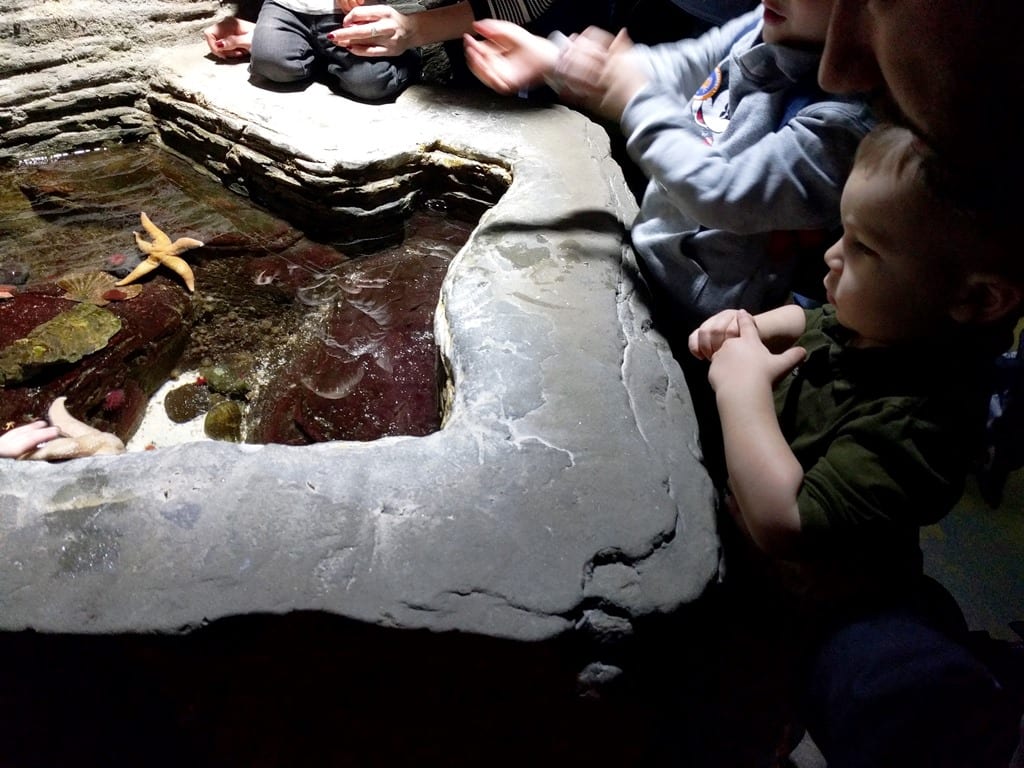 Surprisingly, that was the only interactive experience available. I think there are little excursions you could pay extra for, but I can’t imagine doing it here. Go to Florida. 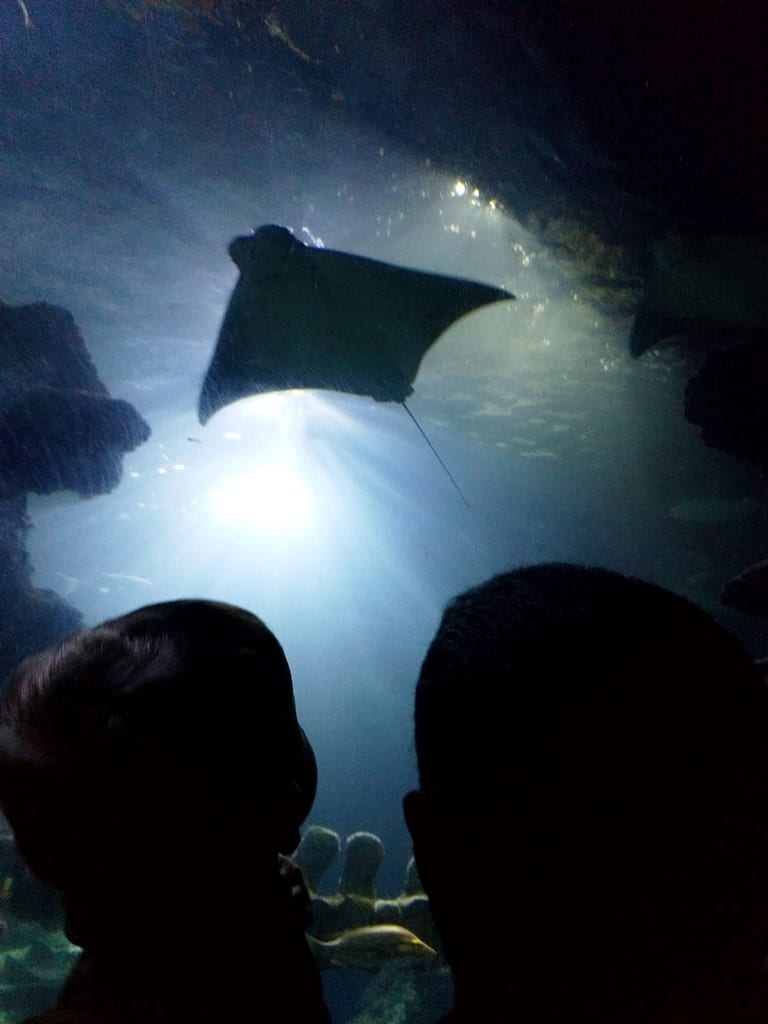 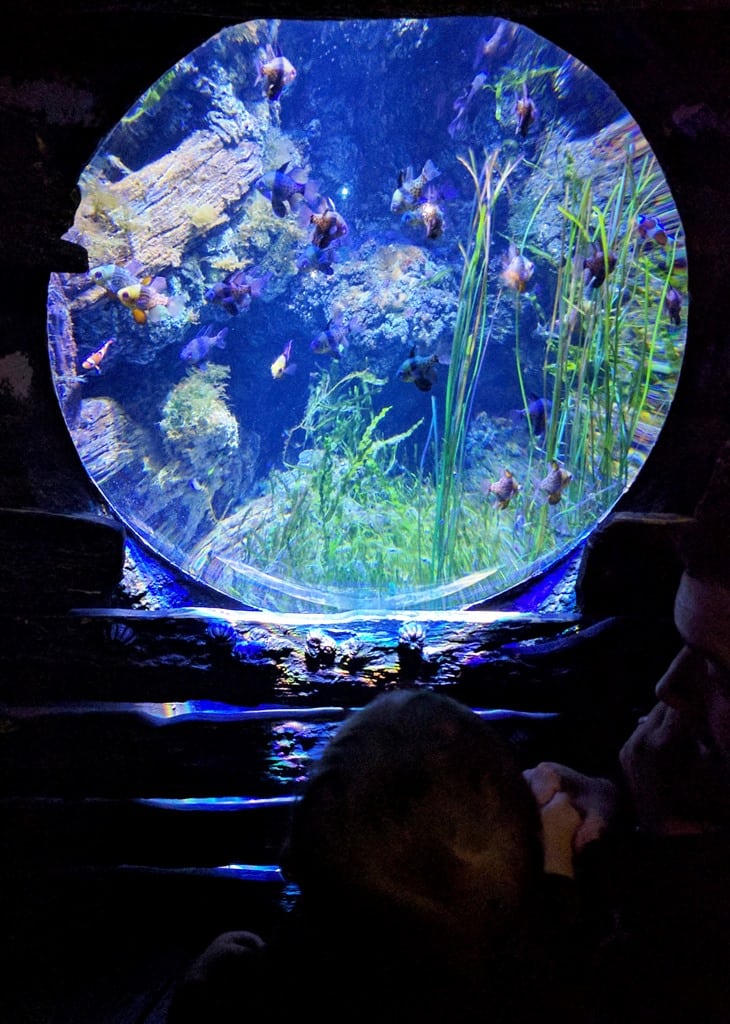 I was so entranced by the sharks in this tank that I didn’t even notice the Easter Island sculptures until I was uploading photos: 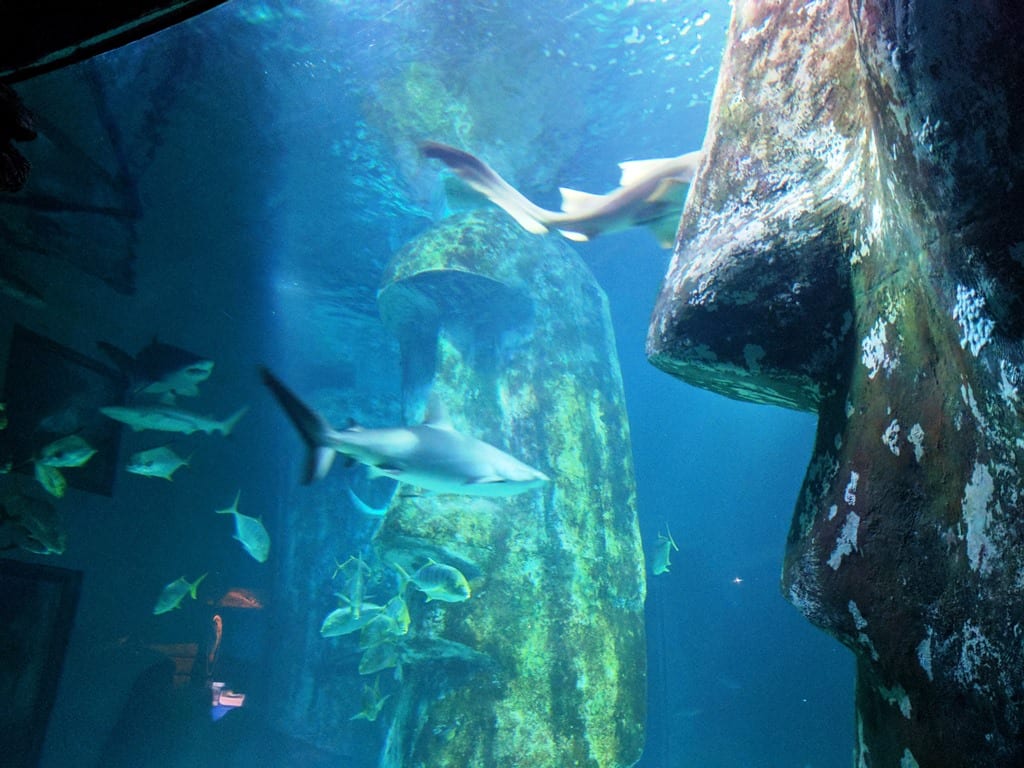 Perhaps one day, I will look at this type of tank and not make a terrible Finding Nemo joke. This was not that day. 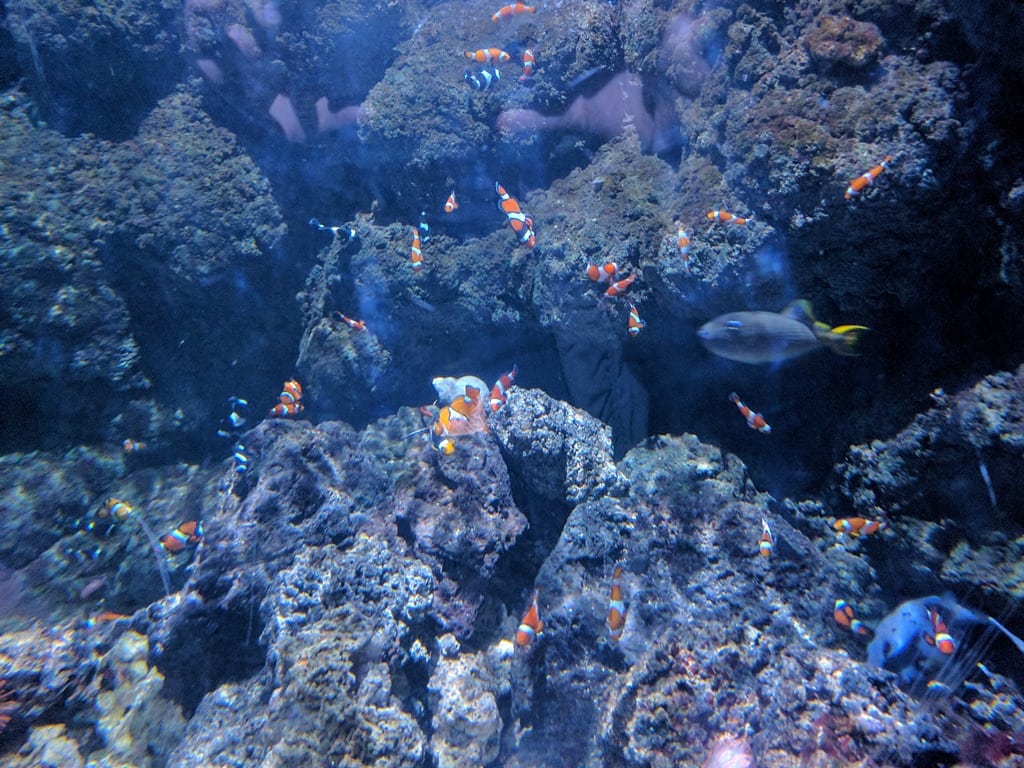 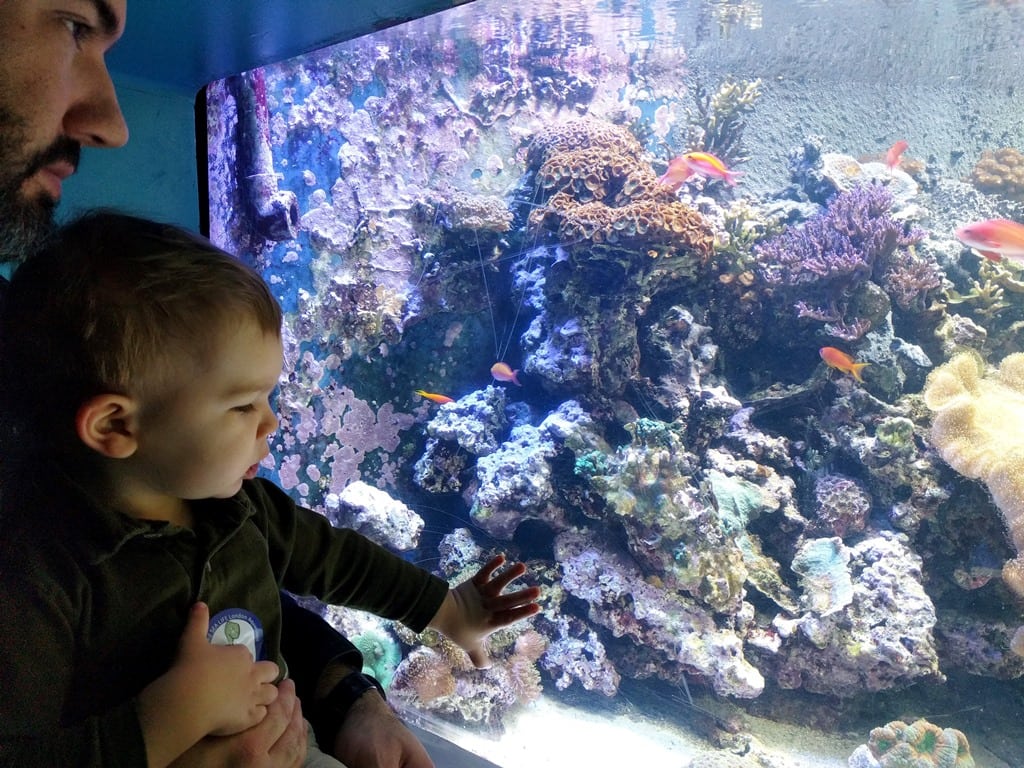 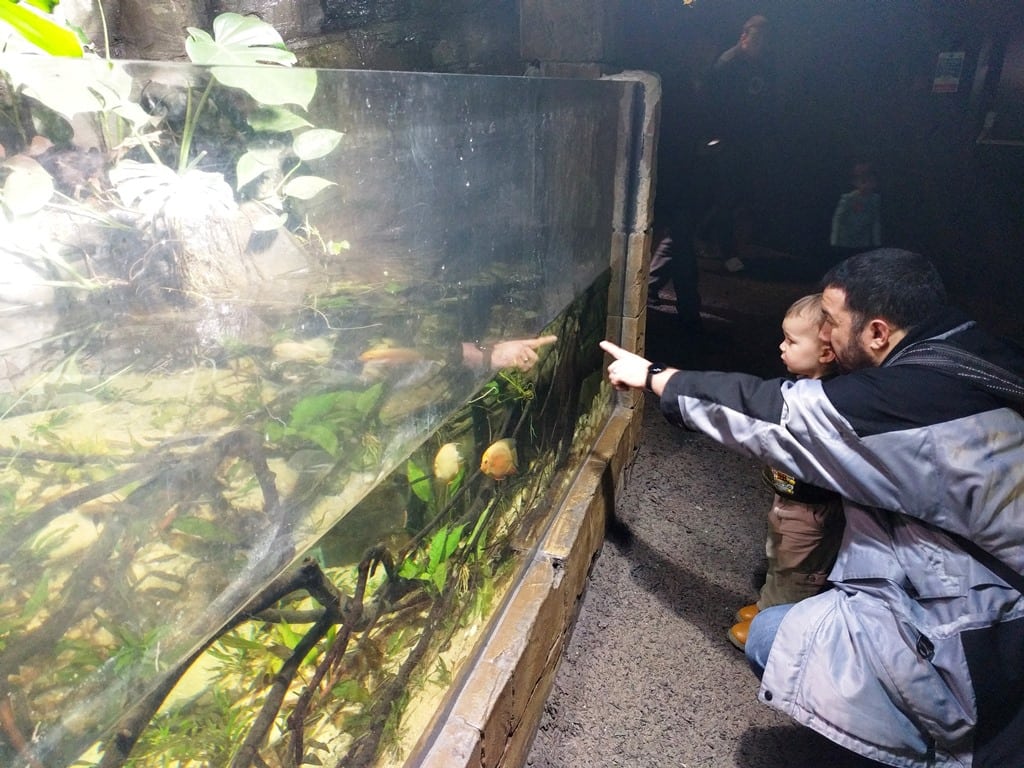 Below, we’re checking out turtles. 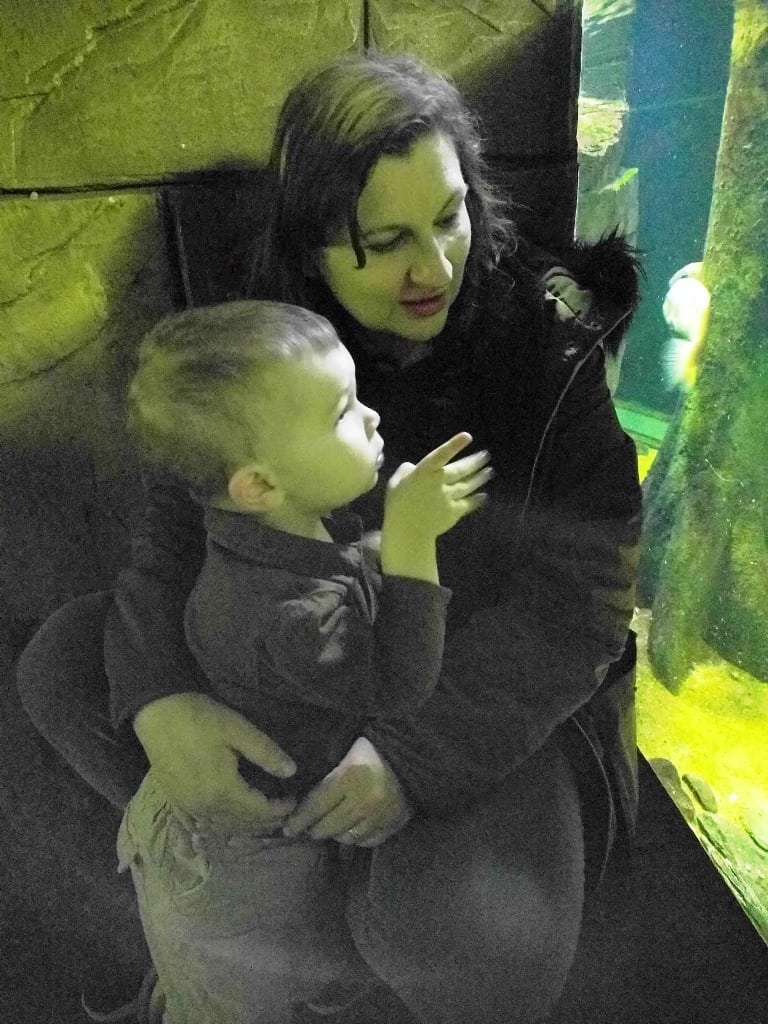 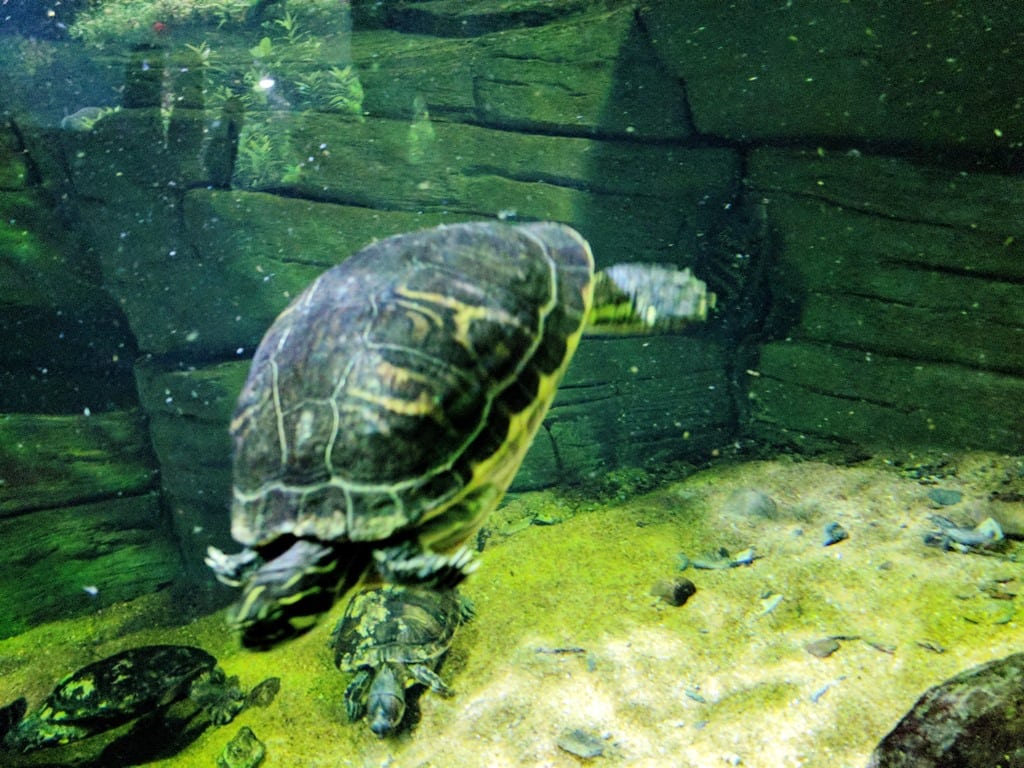 They didn’t come close enough to get a good photo, but we did see some giant sea turtles near the end. We were lucky to get to watch them eat, but that also kept them far from our location. Still cool to see, though.

And of course, penguins are always a winner. 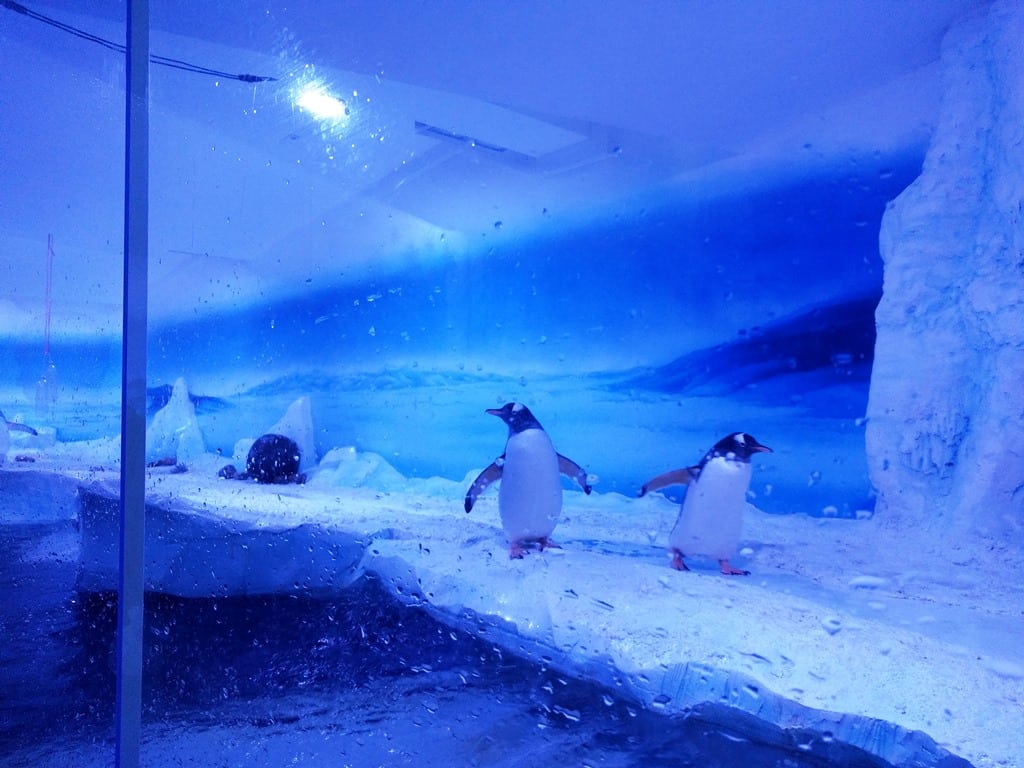 This tank was cool because you could see them underwater, too, and we got to watch them dive in and then pop back up onto the “shore” a few times. Penguins rival manta rays for most fascinating to watch swim and move. 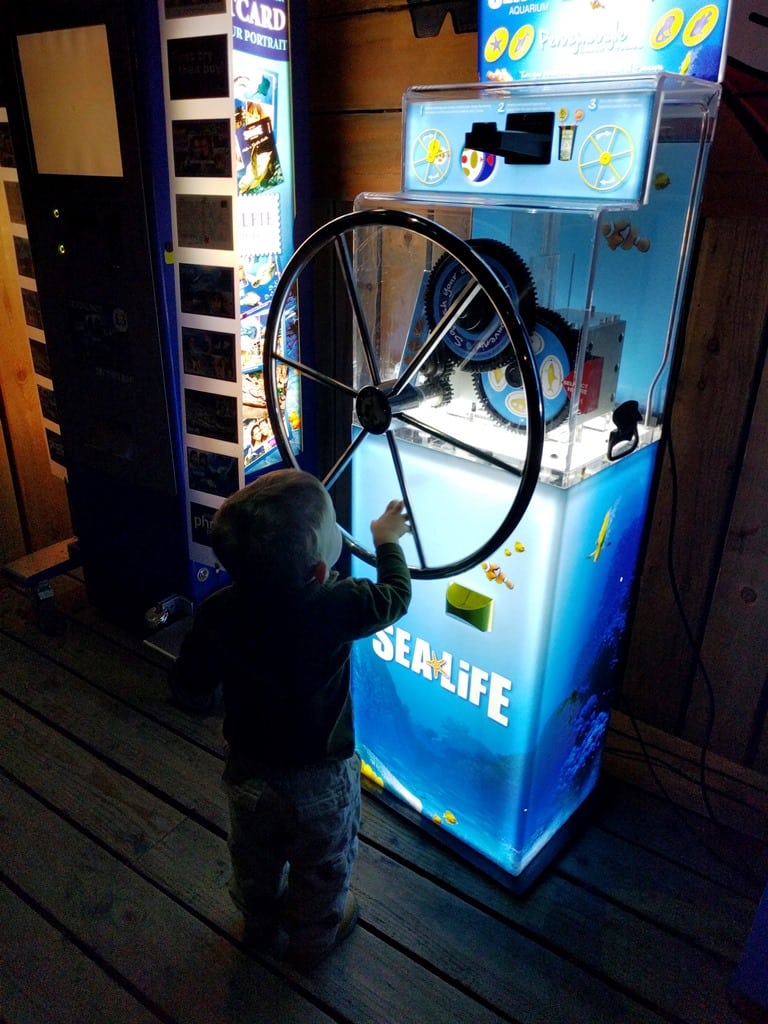 That was just one of those penny-squashing machines but Dex deeply enjoyed twirling the wheel at each one.

My favorite part was at the end, when we found bench seats in a nearly-deserted area and were able to spend some time quietly communing with sharks. 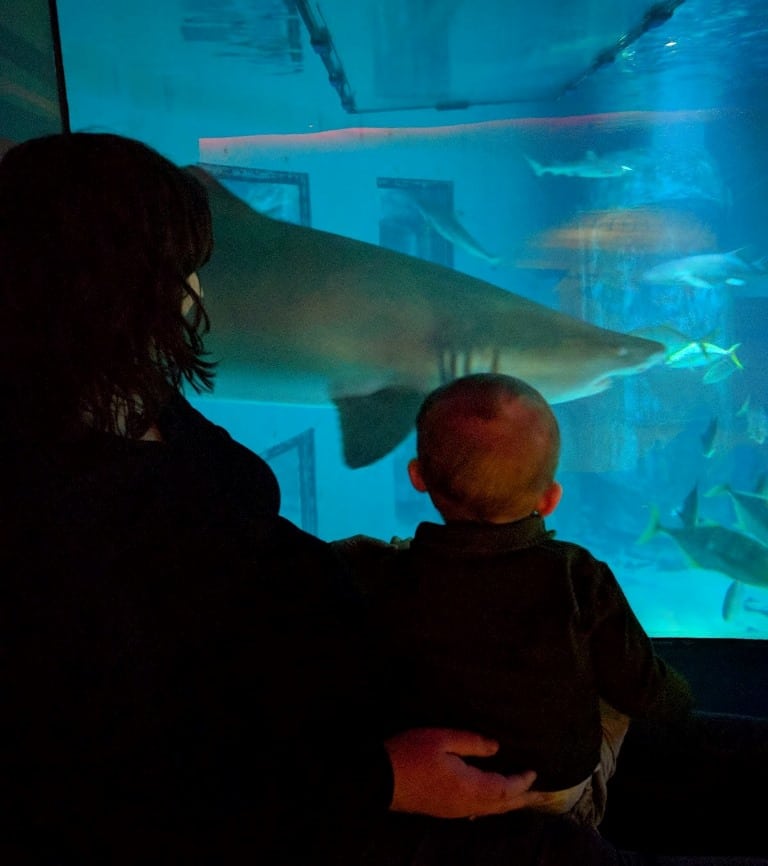 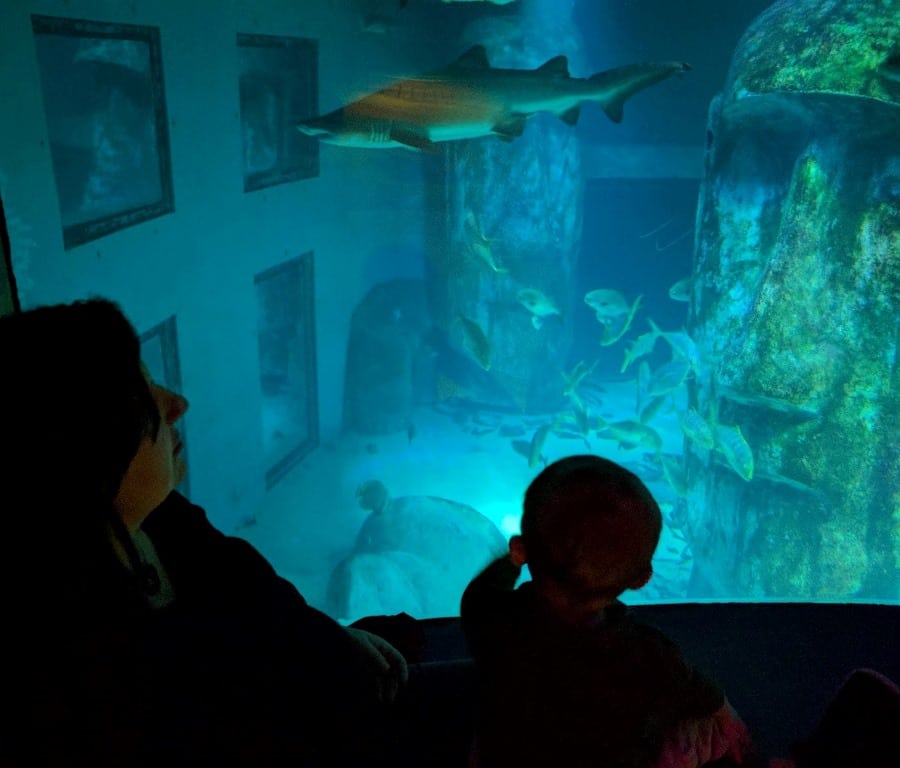 I can’t necessarily recommend the London Aquarium to visitors. It’s a fine aquarium, but nothing super impressive. Even despite its London-Eye-adjacent location, I find it hard to believe tourists visit it at all, although we saw plenty of them while we were there. At full price, it is definitely expensive, for what you get. It’s ideal for the situation we were in – a local family who bought train day passes which gave us a 2-for-1 ticket (Dex was free), and its location let us take in Westminster Abbey and Big Ben and a few other famous sights on the way.

We were back in our burrough for Nando’s lunch by noon, then headed home where Dex napped for FOUR HOURS (2.5 – 3 is norm) and I joined in for nearly two hours. Told you we can’t hang for more than a bite-size outing.

Now, trying to decide whether we can handle another mini-exploration next weekend, and if so, what we should see.