This is it, gang. As long as everything continues to truck along normally, tonight was our final ultrasound. And it’s a good thing Matt thought to snap a quick cell phone photo of the screen because we just now realized we cannot find the single printed photo they gave us. That’s right. Through this entire pregnancy, we have received precisely two printed ultrasound photos and we lost one of them. The best we can figure out is that Matt handed me my discharge paperwork with the photo inside, I didn’t realize the photo was there, and it slid out.

I’M SORRY, CRICKET. When you ask me why there are 4,345 ultrasound photos of your brother and one of you, I’m totally blaming the NHS. (Sorry, England.)

My scan was set for 1700 so we decided to make a night of it. Matt left work a little early, we woke Dexter from his nap together and all bundled up to brave the cold. A bus and a train trip later, we were tucked in a dark room, watching Cricket squirm on a big screen.

Well, Matt and I were. Dexter was busy eating an apple, climbing on all the furniture, and playing with an rubber glove inflated to create a chubby hand balloon.

The tech said, “It’s hard to get some of these measurements; he never stops moving!” and I felt vindicated, as I’ve been complaining about Cricket’s nonstop hardcore parkour practice for months. “This is what I’ve been SAYING!”

Cricket is good. Estimated 6 pounds 11 ounces, which is a little big – 78th percentile – but well within the range of normal. All of his measurements were within normal range, and we saw his brain and I’m pretty sure he looks smart. He’s still rather high up. I told the tech Dex came at 38 weeks, 7 pounds 2 ounces, and she said it looks like Cricket is on track to be about the same and I was like, “This is what I’ve been SAYING!” again, so this visit was all about validating my wild and uneducated predictions regarding Cricket and his birth.

Afterward, we got fish and chips at a pub next door then headed home.

I’m 36 weeks pregnant and this is officially the home stretch. I have no doctors’ appointments next week then two scheduled for the following week and then it’s one more week and then due date week.

Any day now, this little dude will change our lives. 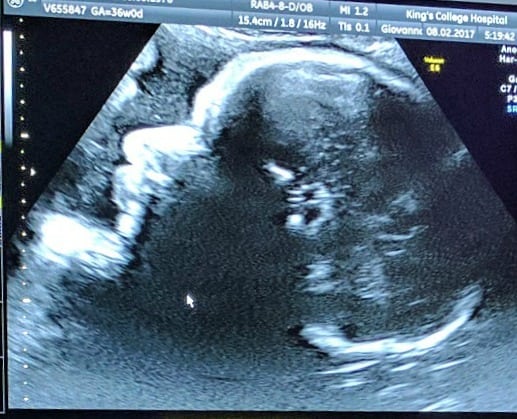