You: “We get it, Jamie. You really like books and reading. You are weirdly dedicated to the library and are super happy that Dexter loves books, too, and you talk about it all the damn time. WE GET IT.”

Me: “BUT HAVE YOU SEEN A WHOLE BUNCH OF PHOTOS OF DEXTER READING BOOKS, ALL GATHERED IN ONE ADORABLE COLLAGE HERE ON THE INTERNET?”

Dexter reading photos are at the end, but first, my top books of 2016.

Another relatively light reading year for me, but there are some treasures. Maybe next year I’ll get to read more. I hear you get LESS busy with two children, right? RIGHT?

Seriously, though, reading is a big part of my life and one of my 2017 resolutions is to put some effort into it. It’s always come easy because I’ve always had lots of time for books, so if I read a few duds, who cares? There were 3-4 good books for every bad one. Now that that has been untrue for two years in a row, I’m putting some effort into research to make sure my precious reading time is of higher quality. Man, this is some privileged person problems, here. Also note that the links below are affiliate, so if you click and buy a book, I’ll get a few pennies (literally) to put toward my hosting.

Here are previous lists, and here are the 2016 picks:

– I’ve read a few getting sober memoirs and this is among the best. I actually learned some stuff about the science of black-outs, to boot. Timely, since it seems like everyone I know is slowly giving up drinking.

– Not going to win any literary awards, but it was a fast, fun read with an original concept.

– Hey, look at me, a mere decade behind a trend! I can see what this book was so popular and I’m a sucker for journalism fiction. I also liked what a lot of people didn’t like – the slow parts, about writing a book and uncovering news. Because that work is slow and boring, until it’s not. Accurate.

– I wanted to read this immediately after finishing this profile of Helen Ellis, and it did not disappoint. My top book of the year. Loved every story.

– Big fan of Sloane Crosby’s memoir work, and was looking forward to checking out her fiction. Great read.

– I love almost all stories by or about J.D. Salinger, and this one, by a young woman who worked in the legendarily reclusive author’s publishing house, was solid.

, one of my top books of 2014, about a secret society of supernatural do-gooders. Not quite as good as The Rook, in my opinion, but still a pretty great read.

– Told from the perspective of a man who has just died, under mysterious circumstances. R.I.P. lost a little steam toward the end, but most of the book was so funny and entertaining I’m leaving it on my list of favorites.

– I almost hated Lost & Found because it was so, so relentlessly sad for so long. It got less sad, but stayed somewhat sad. It also got satisfying.

Worst Books of the Year: The Flame Alphabet (I STILL get angry when I think about the time I wasted on this pile of rubbish), Annihilation (classic example of taking a great concept and making it boring as crap) and According to Yes (spoiler: the nanny fucks everyone).

– Neither Matt nor I care for this one, but Dex is picking up words from it fast (at one point, Matt became convinced that our 1-year-old COULD READ), and it’s long enough to keep him still for a good 5 minutes or so.

– Dex asks me to read this nearly every day. Cute story, cute art.

– This one is written by Matt’s friend’s brother. We also have An Awesome Book and An Awesome Book of Dreams, but Thanks is Dexter’s favorite. I think it has made him more polite, because he enjoys the book and therefore wants to say the words “Thank You.”

– Spoiler: The Pout Pout Fish turns into a Kiss Kiss Fish. And one day, out of the blue, Dexter grabbed the book and smooched the fish on the page where it makes its transformation, the first time he’d shown any evidence of comprehending what we’re reading. I’ll never forget it. There’s also a part that goes “Blub, blub, bluuuuuub” and he always chants along.

– He especially likes this one when he’s being changed, for some reason. I like it all the time, and hope as he’s older and comprehends more, it will become a tool to talk about his feelings.

– This a cute story with great art and an Easter Egg for particularly observant parents, or parents like me who have read it 500 times.

– Superfast read with wonderful art. I could easily see hanging prints of this book. I loved, loved, loved it until one day when Dexter tried to make me read it 406 times in a row. He hasn’t done it before or since or with any other book… but I like it a tiny bit less now because DAMN. That is a lot of times to count to ten with birds, no matter how dope the illustrations are.

– Dexter’s version is interactive, with little slide panels peeking at the next thing Brown Bear (or whichever animal) sees. Not only does Dex love to operate the little slide things, but he fastidiously replaces them after each reveal, before we turn the page. I’ve read it to him so many times he usually makes the appropriate animal noise before it’s even revealed.

– Very cute, quick read. Berenstain Bears were a favorite when I was a kid and they’re still good. Can’t wait until Dex is ready for some of their more involved stories.

– Pat the Bunny was not only Dexter’s favorite book for months and months, it was his favorite toy. He’s read it and played with it so many times that it no longer has a front or back cover, and his thumb is now too big and he always gets it stuck in the “mummy’s ring” part. Pat the Zoo is a version with different textures for different animals, and no hazardous ring hole traps. 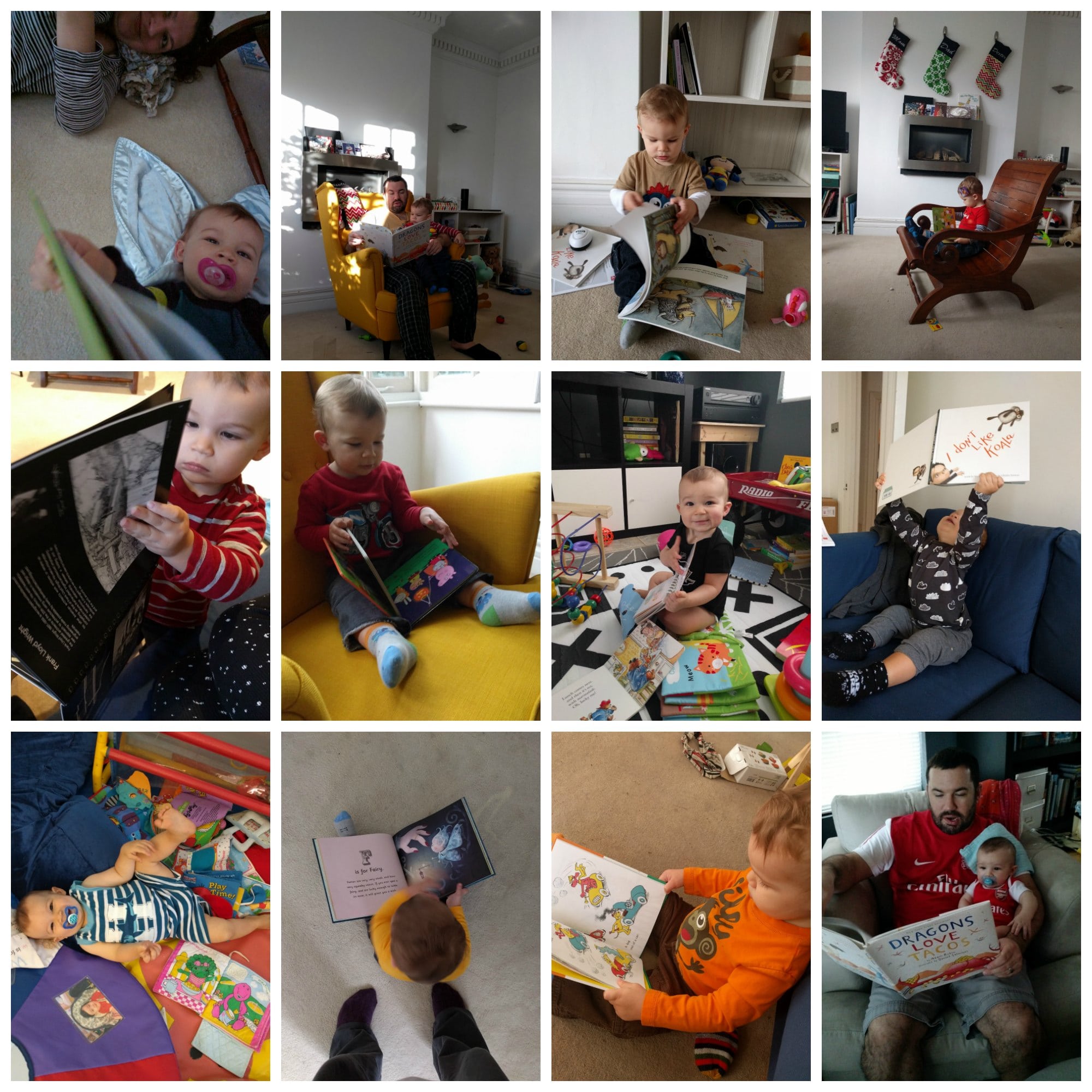