When we were leaving Florida, during our final garage sale, a few Orlando pals stopped by to buy to some stuff, and mentioned they’d be spending Thanksgiving 2017 in Florence, Italy. They had a big apartment, and would we like to meet up? 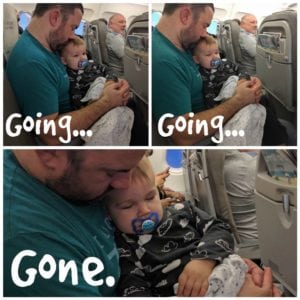 We left on a Tuesday afternoon and returned on a Sunday. On the flight there, Dexter blessed us with a rare airplane nap. Matt joined in.

Our family ended up renting our own flat for reasons of Toddler and Pregnant Belly and Sleep. It was teeny but charming. Dexter LOVED it, and would run back and forth with unbridled glee every time we returned “home.” I think the hobbit hole-like layout felt his size, to him.

The night we arrived, it was already past Dex’s bedtime, so we pretty much put him straight down (he had his own area with a door for once, no cowering in the hall for us, woo hoo!) and then Matt went scouting for some pizza. He was successful at Toscania Pizzeria, and brought home a pizza the size of a surfboard. 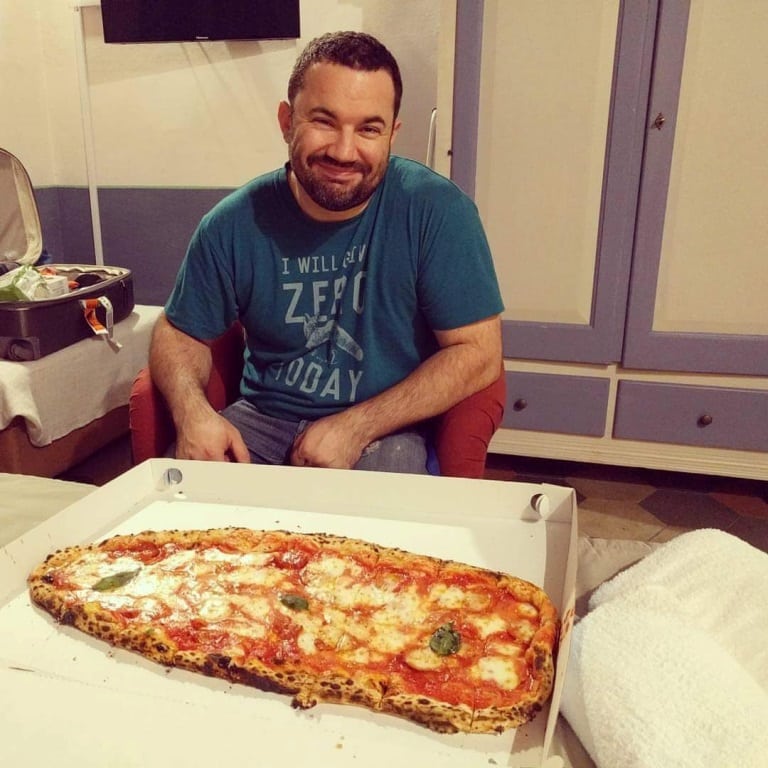 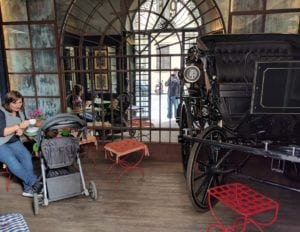 I laughed for a good two minutes and then we devoured the entire thing. I spent some time that evening researching coffee + pastry places for breakfast, and the next morning, we trekked to Cafe 19.26, where I immediately realized it wasn’t where I was intending to go at all, and they only had a sad display of a few croissants, which we ate while hanging out in a strange side room housing a carriage for some reason.

Next, we stopped by Piazza Massimo D’Azeglio, because we’d spotted a cute playground there on the way to the cafe, and let Dexter tear it up for a bit with all the other adorable European children. 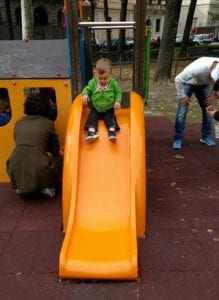 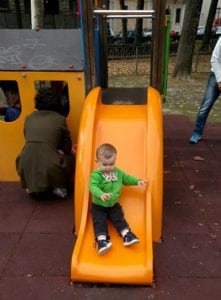 Hungry again, we headed toward the Arno river to find All’antico Vinaio, a sandwich shop recommended by a friend of a friend. Turns out it’s an institution. The line spills out onto the street but the menu is simple and the pace moves fast.

I got La Dante: capocollo, soft cheese spread, arugula (rocket in the UK) and truffle cream. Matt got L’Inferno: porchetta, cheese, pepper cream, spicy peppers and arugula. We took them back to the flat and devoured while Dexter napped. It’s an institution for a reason – delicious sandwiches. 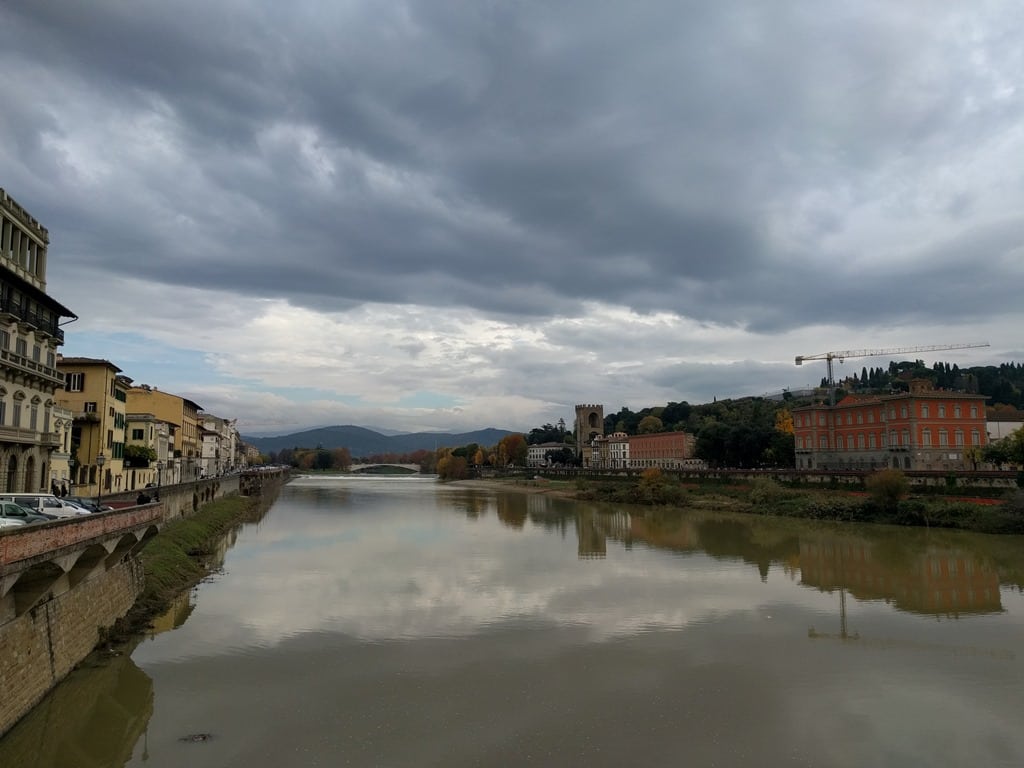 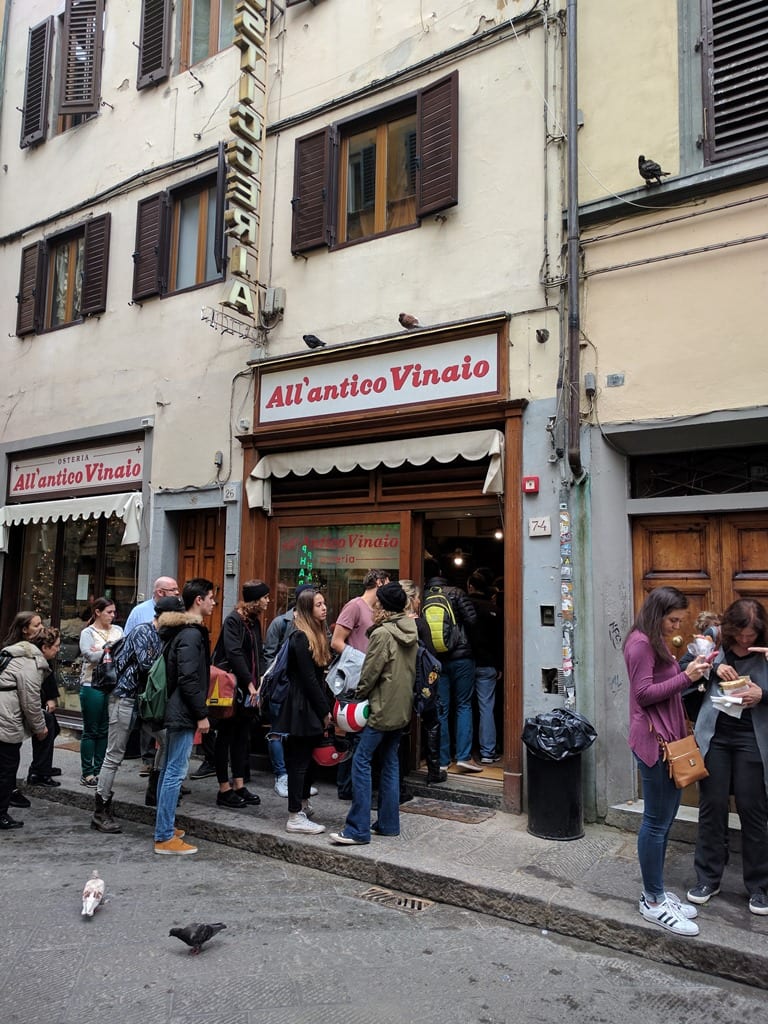 That night, we met up with our friends at their place, where we’d be eating Thanksgiving dinner, and Dex made pals. 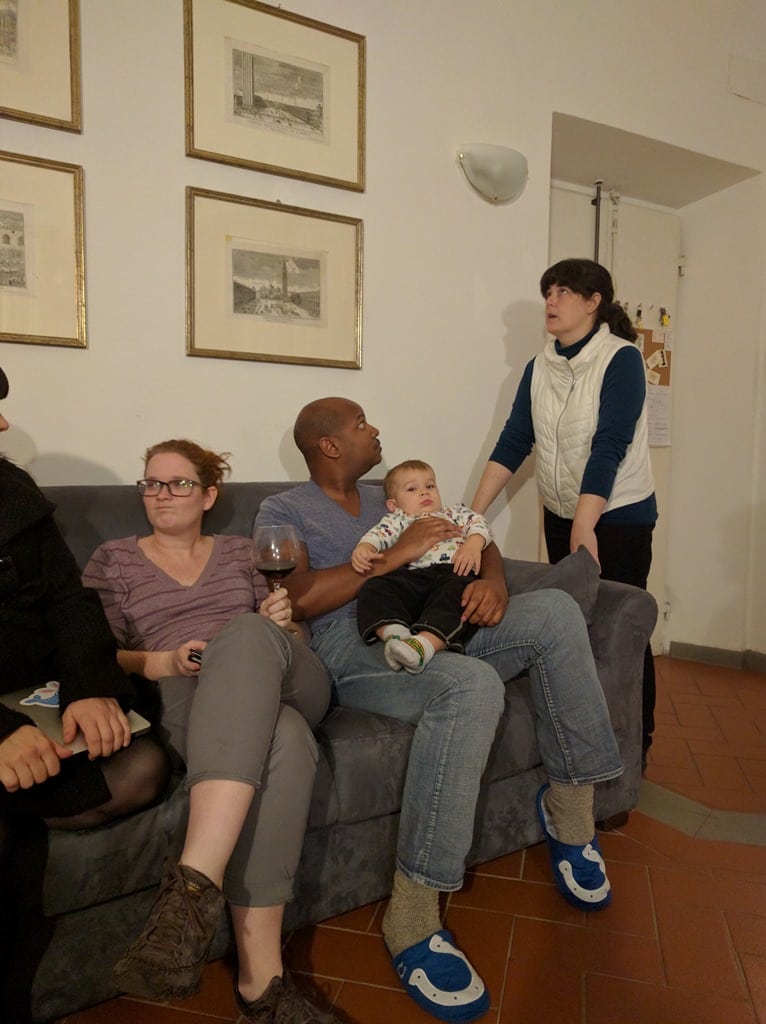 We went for steak dinner and gelato and I got photos of none of it.

The next morning, we attempted to see Michelangelo’s Daved at Galleria dell’Accademia. For some reason the line was shut down, but we did finally find a great coffee + pastry breakfast place: Caffe Rosano. Fresh pastries stuffed with Italian cream and lemony ricotta, supernice owner and we liked it so much we went two days in a row. Note it’s cash-only. I was always so hungry there I kept forgetting to take a photo till it was about too late. 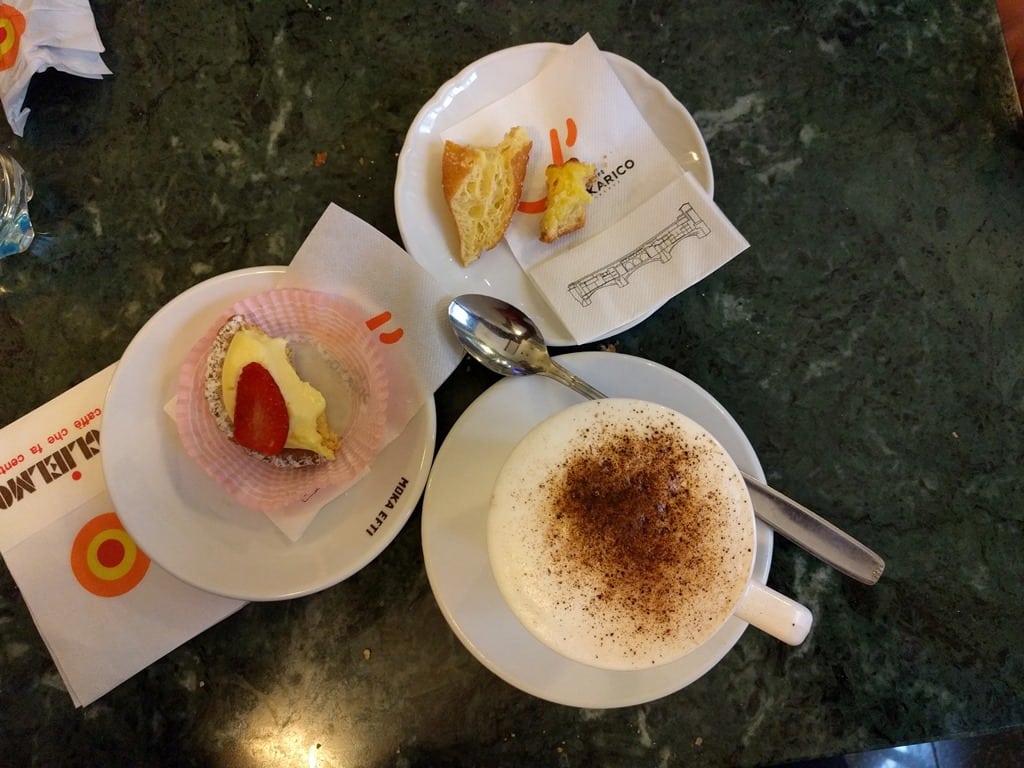 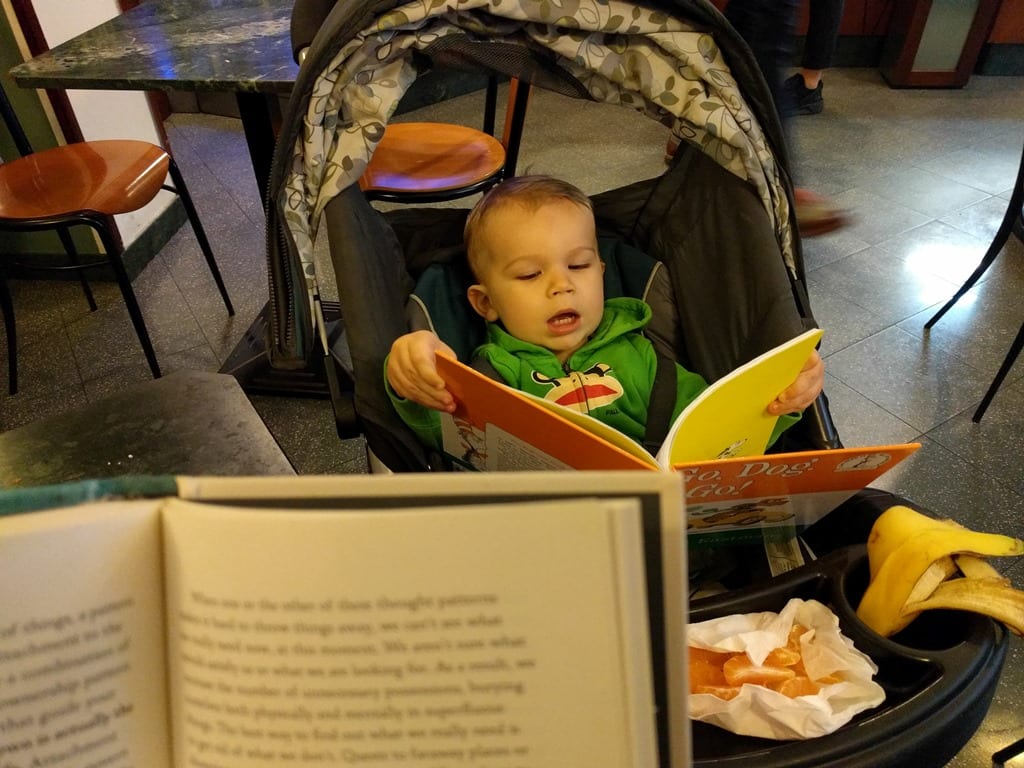 As I was telling Matt, the worst thing about traveling while pregnant is not the discomfort or the decreased mobility. It’s the sudden, uncontrollable urge to pee when you’re in a place that doesn’t necessarily have clean, convenient, publicly-available restrooms. I was in the (lovely) bathroom at Caffe Rosano, thinking that I should really make it a habit to learn how to say, “Where is the restroom?” in the native language of wherever we’re traveling, and realizing that I don’t know it in Italian when I looked up and there was this quirky art: 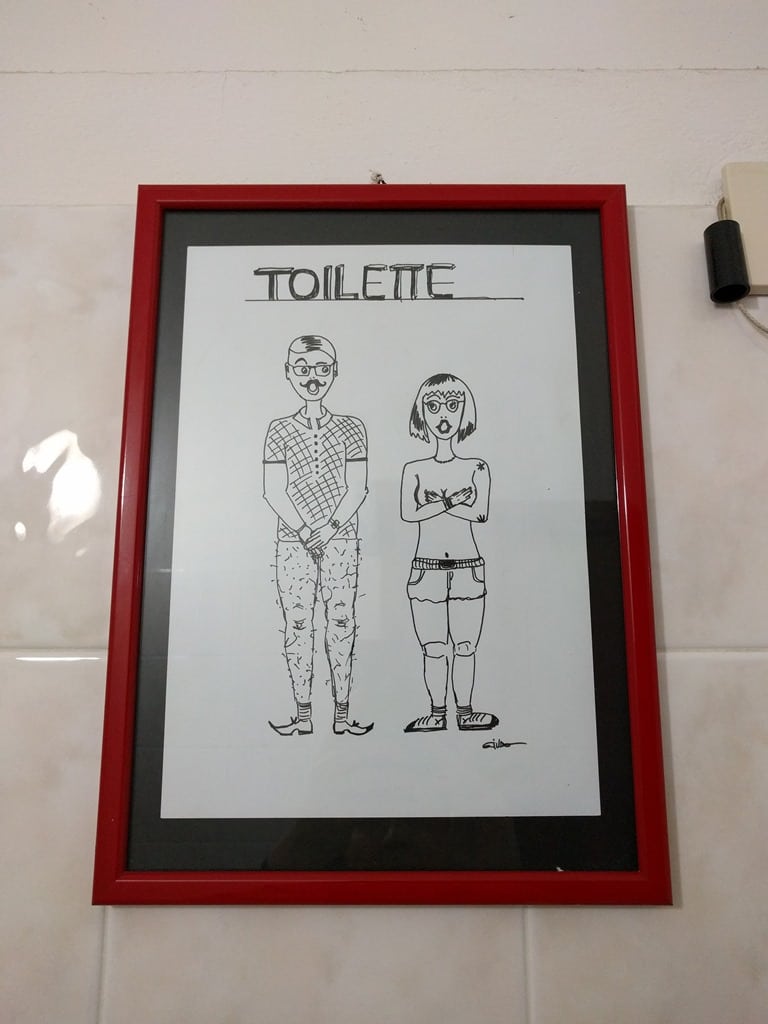 Since we decided to put off David a day, we spent some time climbing the steps of the Basilica di San Lorenzo and gawking at the beautiful buildings nearby. 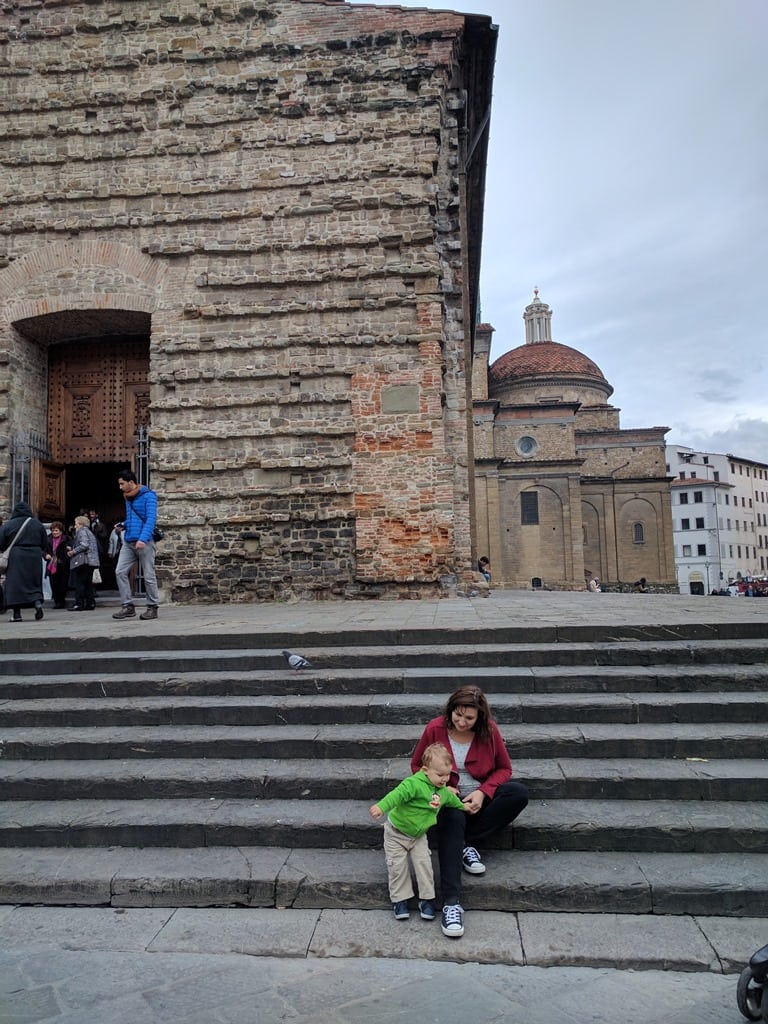 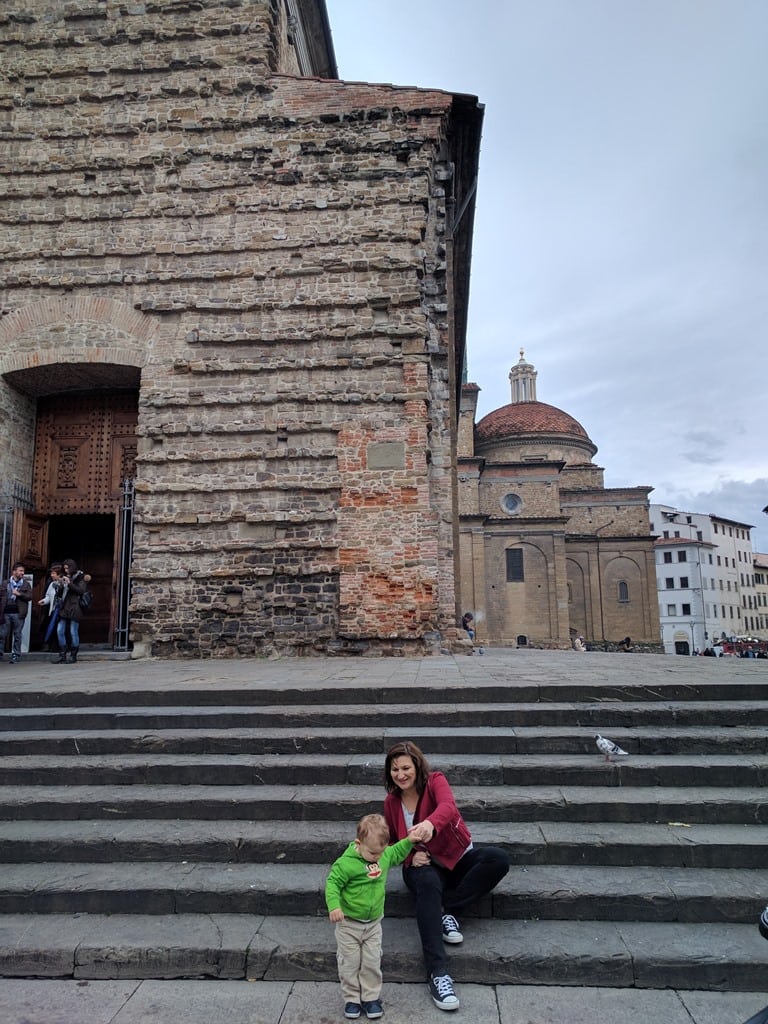 Then we hit a street market where we knocked out 50% of our holiday gift shopping in like, an hour, followed by a sensory-overload indoor food market where we picked up bread for Thanksgiving dinner. 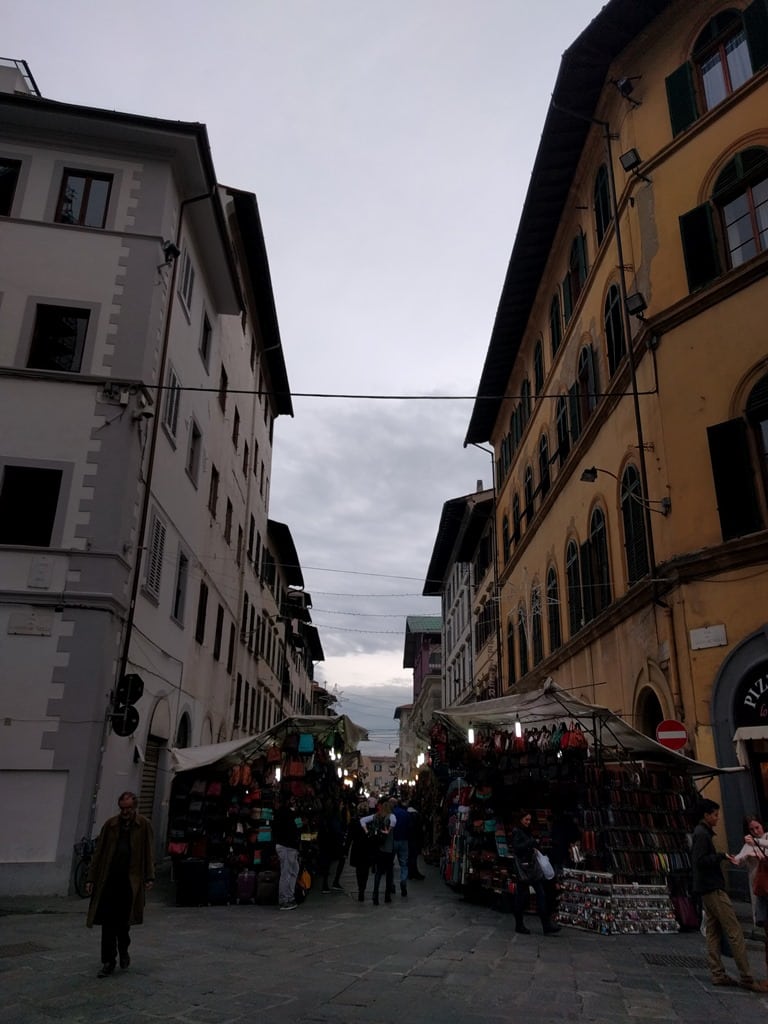 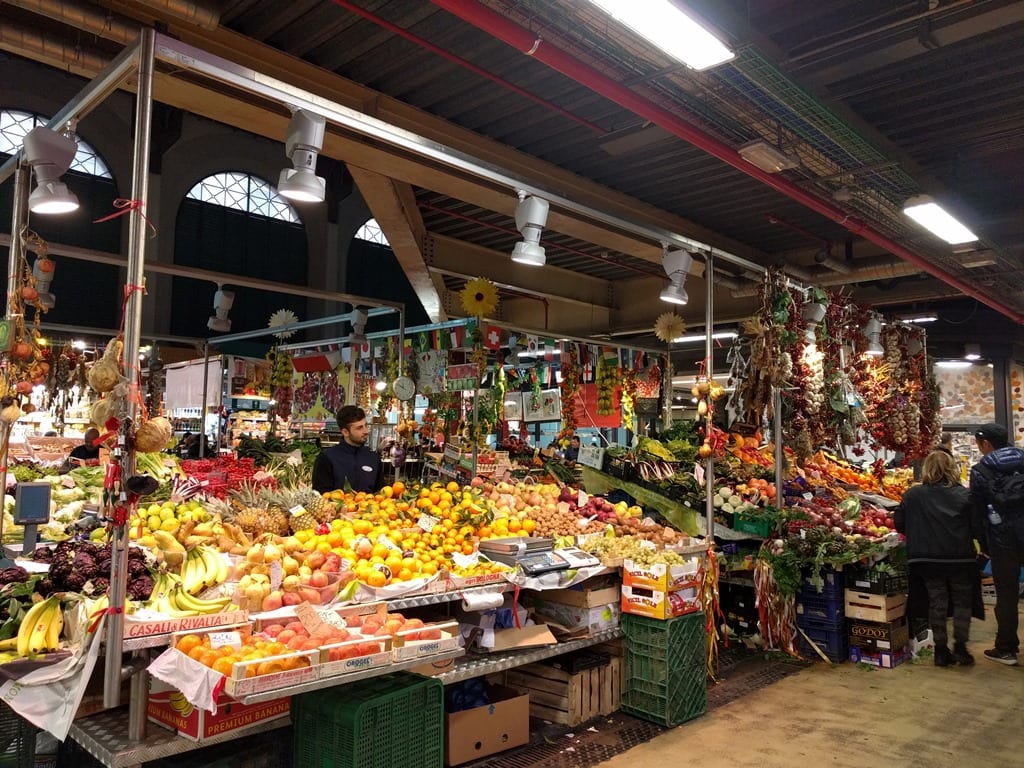 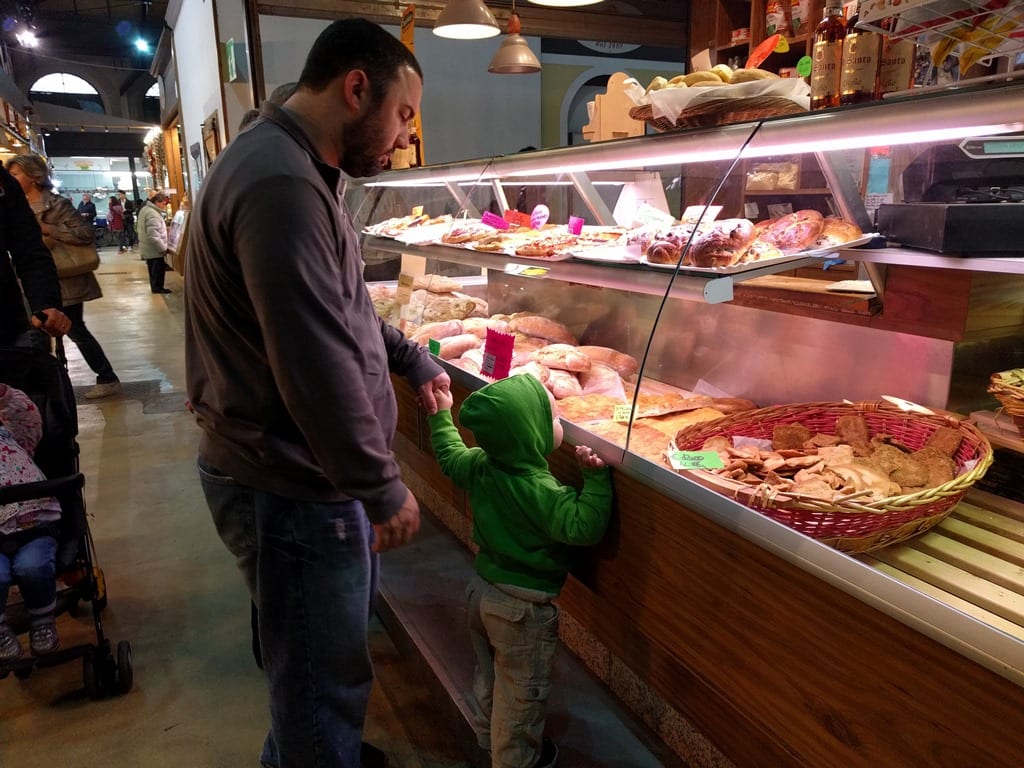 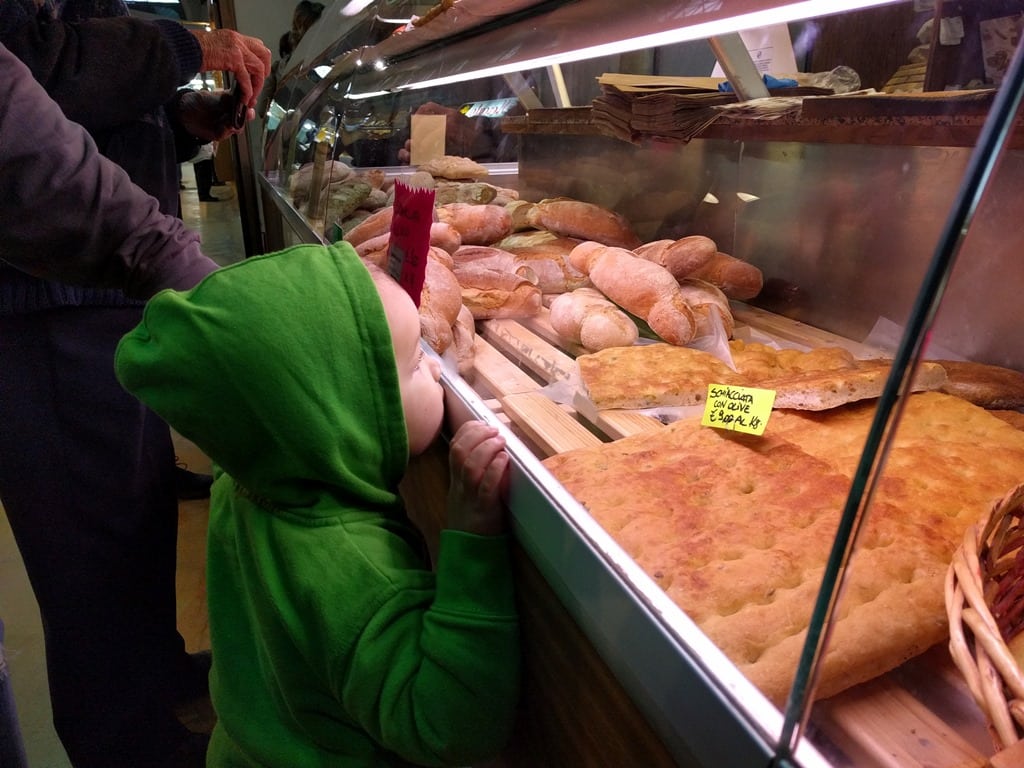 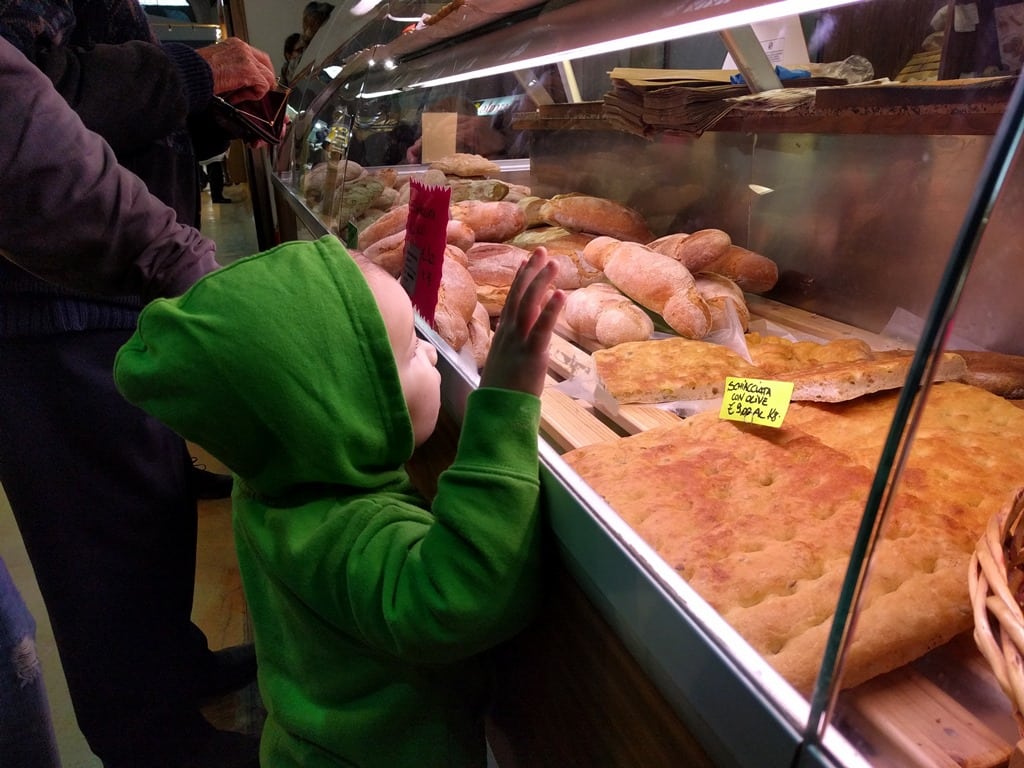 Naptime, then over to our friends’ flat where we enjoyed a delicious Thanksgiving dinner. I don’t know how Stephanie created a perfect roast turkey in a foreign oven without a thermometer, but she made it happen. What I did not make happen were any decent photos, really, but here are a couple: 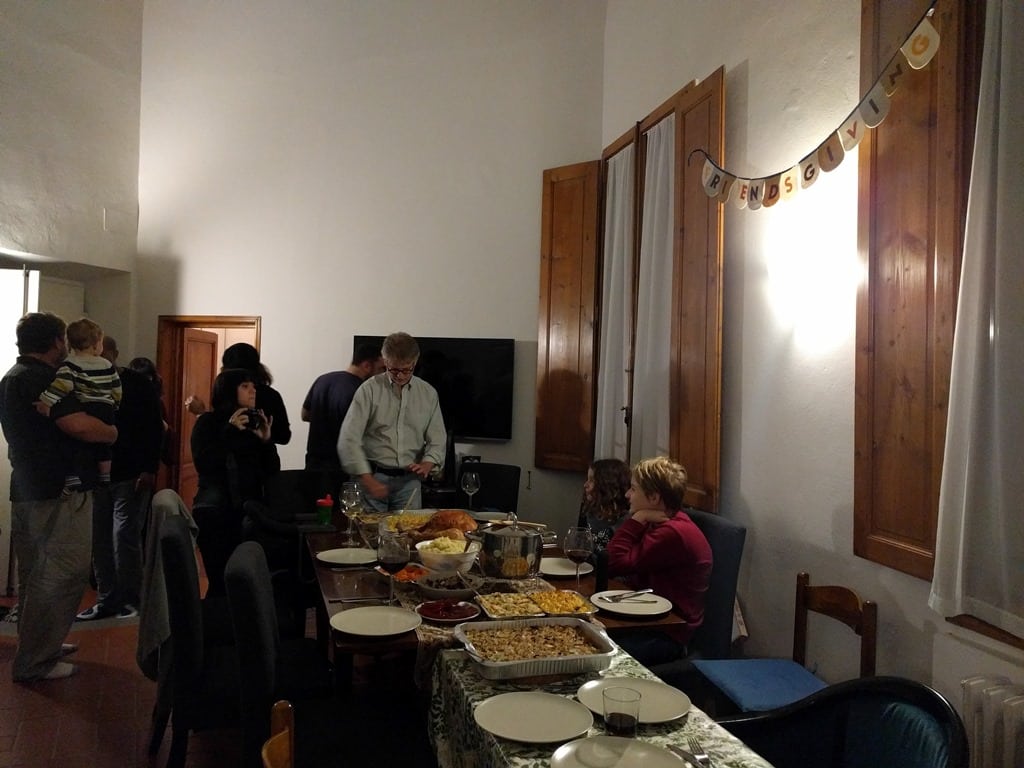 Dexter fell madly in love with our friends’ nine-year-old daughter, and spent the evening alternating between dancing with his hands in the air (like he just don’t care, is it possible to think, write or say the phrase “hands in the air” without that followup? I think not) and snuggling on her lap.

Up next: We actually do see David, plus Il Duomo, and Dexter conquers his carousel fear but develops Vespa-phobia.