Now that Matt is all British, he’s incorporated a new phrase into his vocabulary: giving stick. It’s means good-natured picking on someone, which, if you know Matt, you know is 90% of his interactions with other humans.

I tell you this because I will be giving Matt some stick this post. You’ll notice a running theme. Matt is terrible at taking vacation photos. Yeah, he can do a decent landscape, but when it comes to photos of his fellow beloved family members? Usually, he forgets to take them altogether and if he remembers (or I remind him), they look like this: 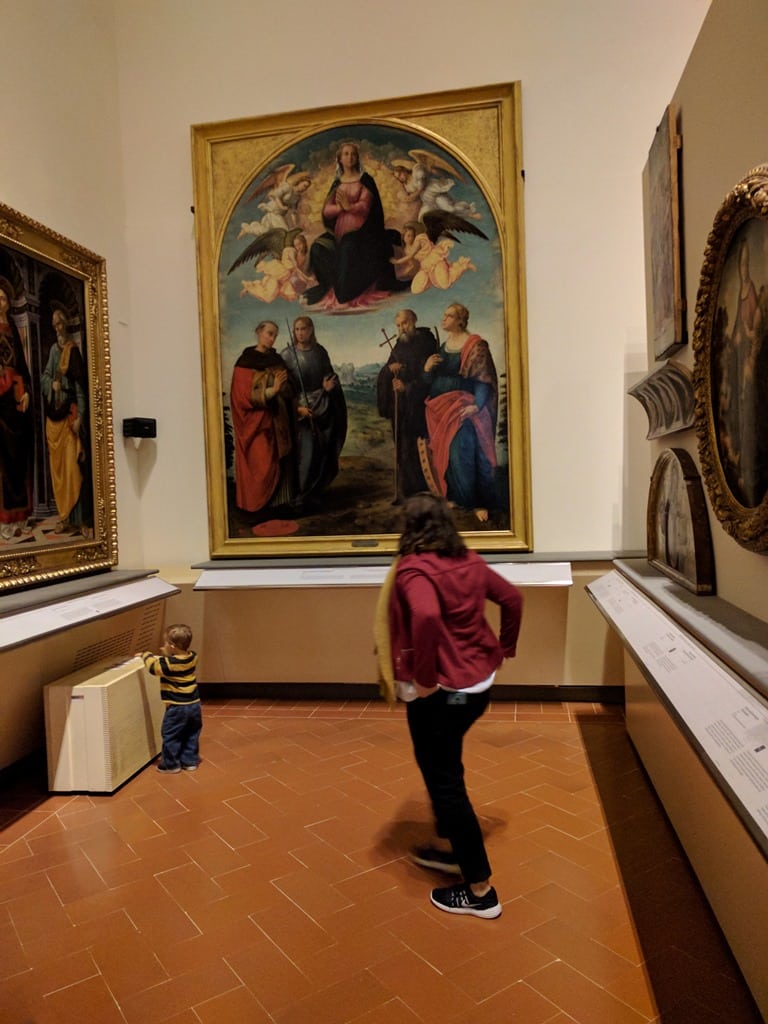 Dexter and I had been gazing thoughtfully and adorably at art, and as I asked Matt to take a photo, I imagined an image from behind, a lovely mother+son cultural moment. Instead, we got Dexter messing with the thing that controls the temperature for the priceless paintings and me hitching up my maternity pants as I chase after him to stop him from accidentally melting priceless paintings.

This is sort of better? 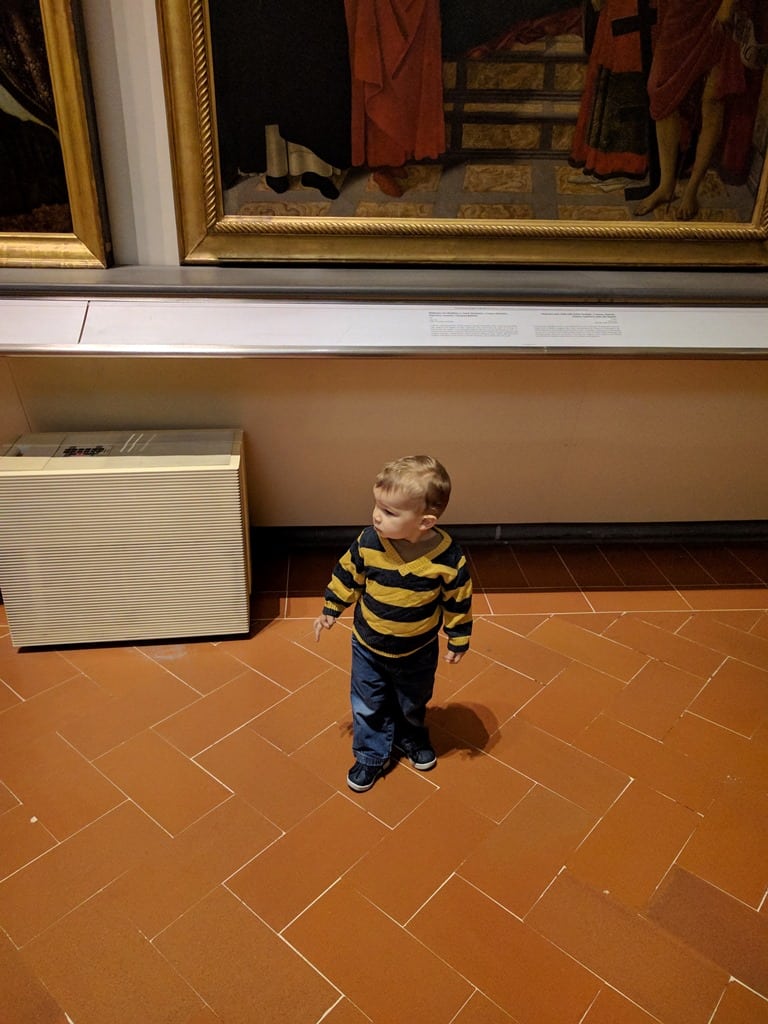 Yep, sure glad we captured a better shot of that temperature control thingy.

Fortunately, when we finally got to see David, I was manning the camera. 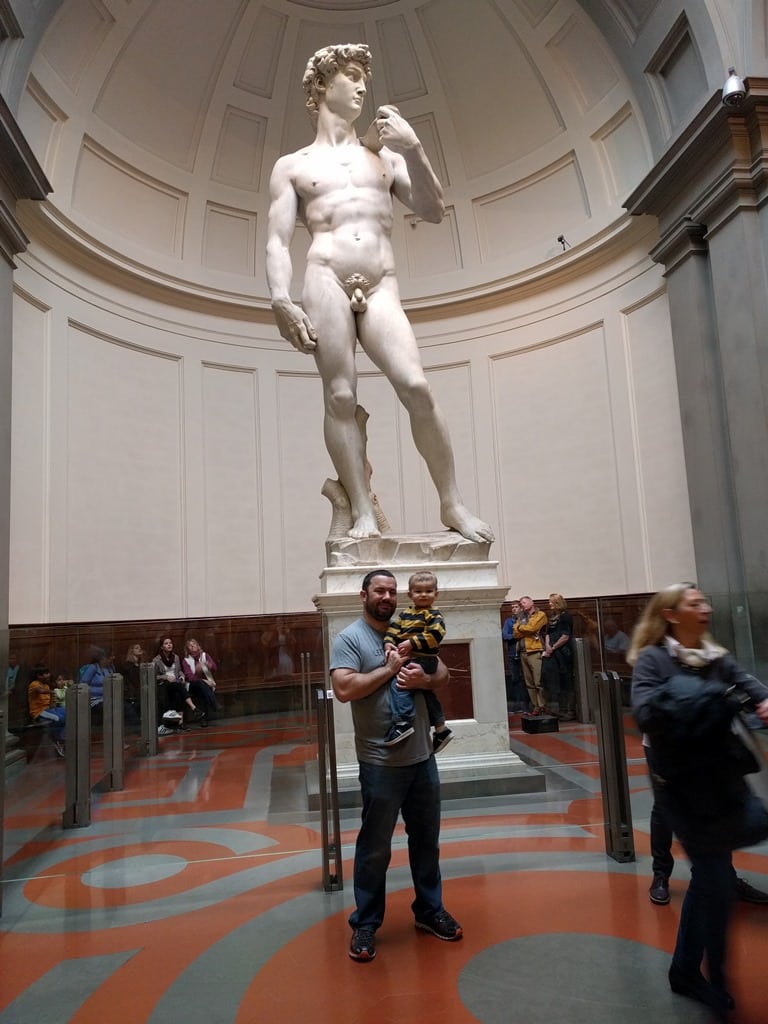 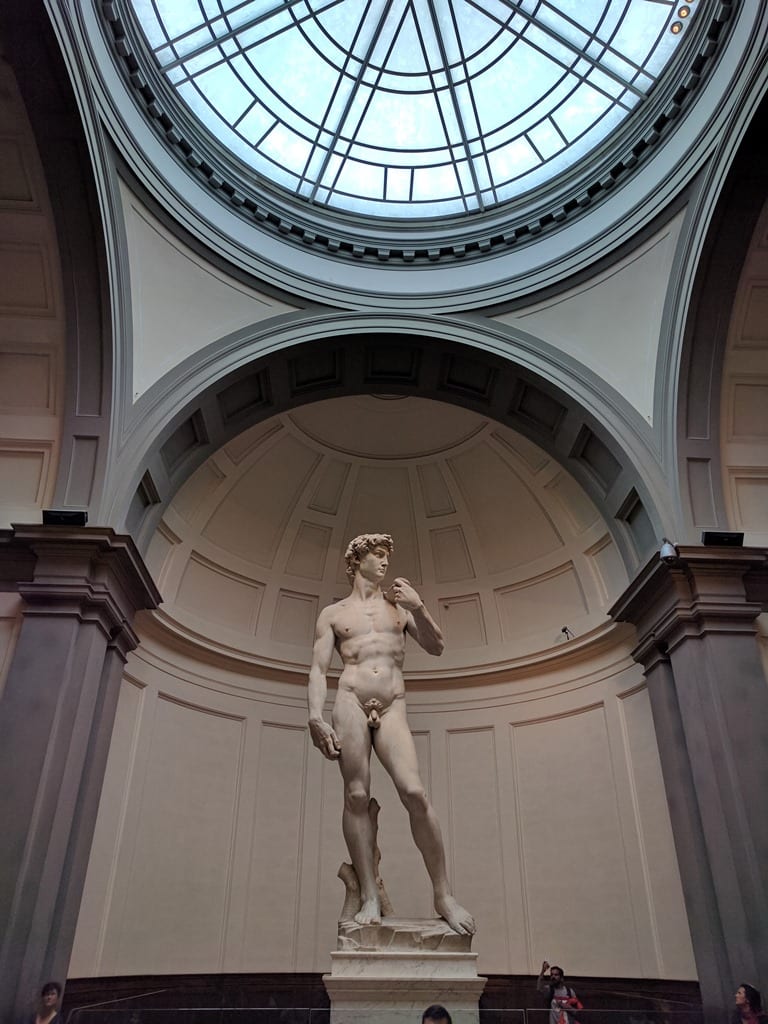 This was my favorite sculpture in a side gallery at Galleria dell’Accademia, where the handsome David lives. Buddies! 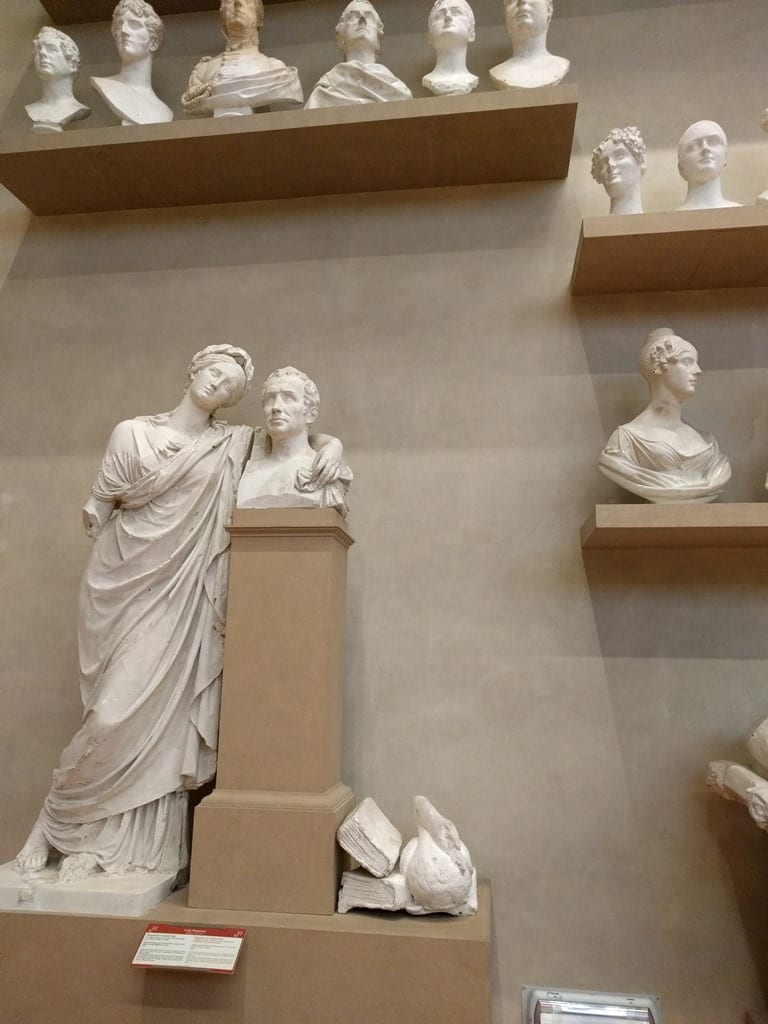 Dexter kept pointing to the next one and shouting, “Mommy!” 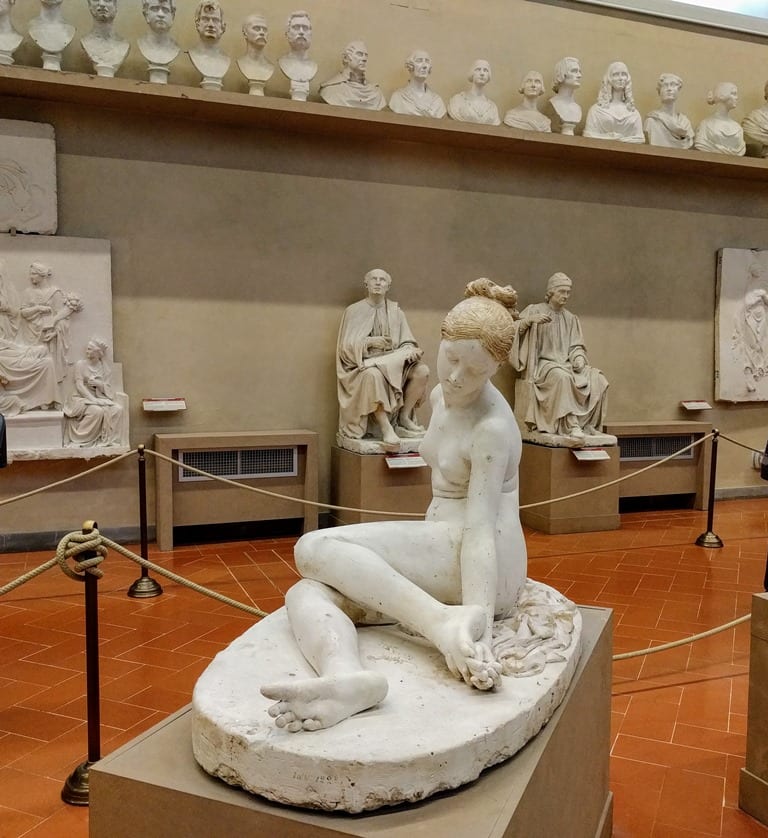 And I just liked this wall of heads. 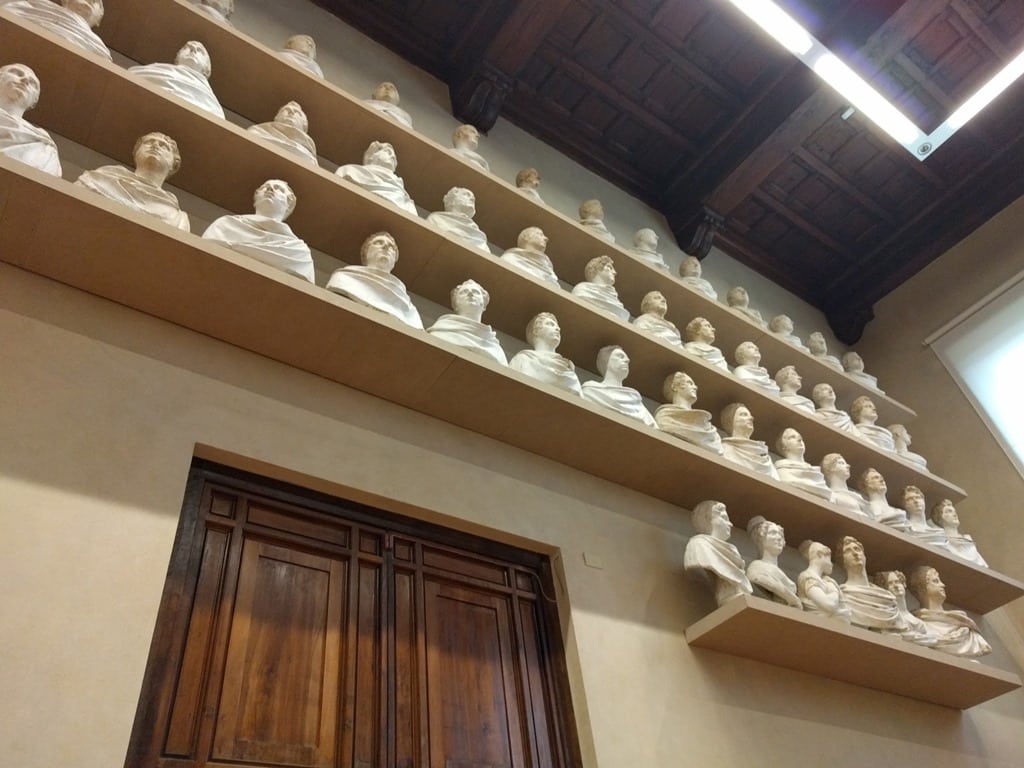 After David, we headed to Cathedral of Santa Maria Del Fiore, more commonly known as Il Duomo or The Dome, where Matt took a selfie no one was ready for except him. 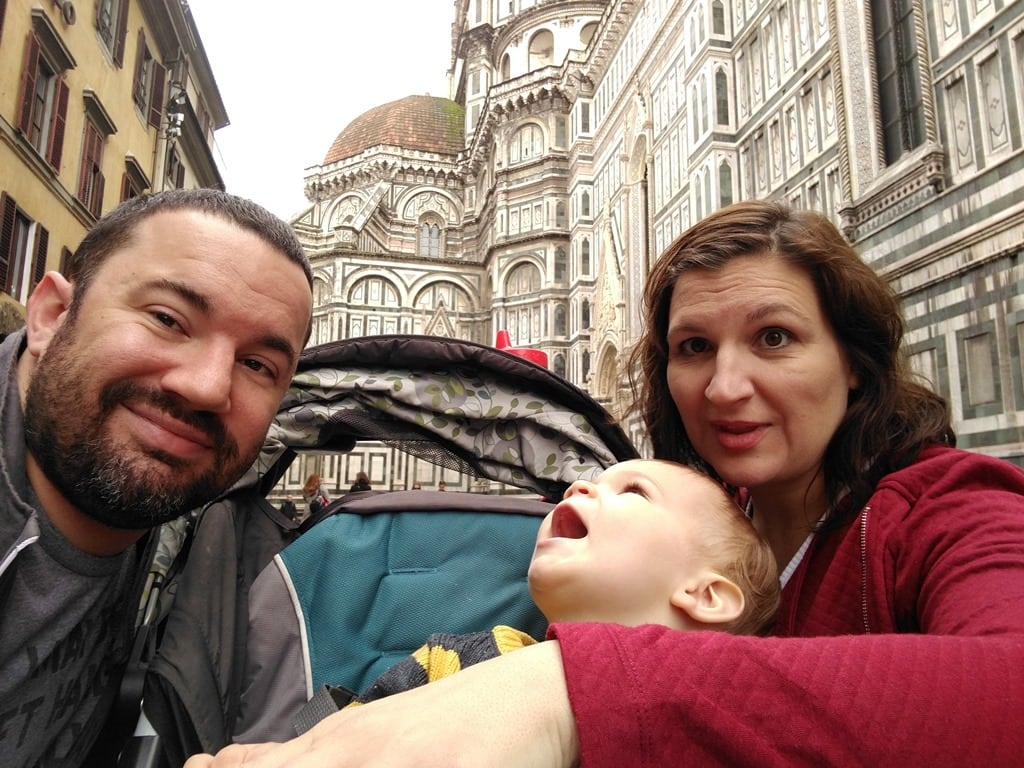 OK, this one is better: 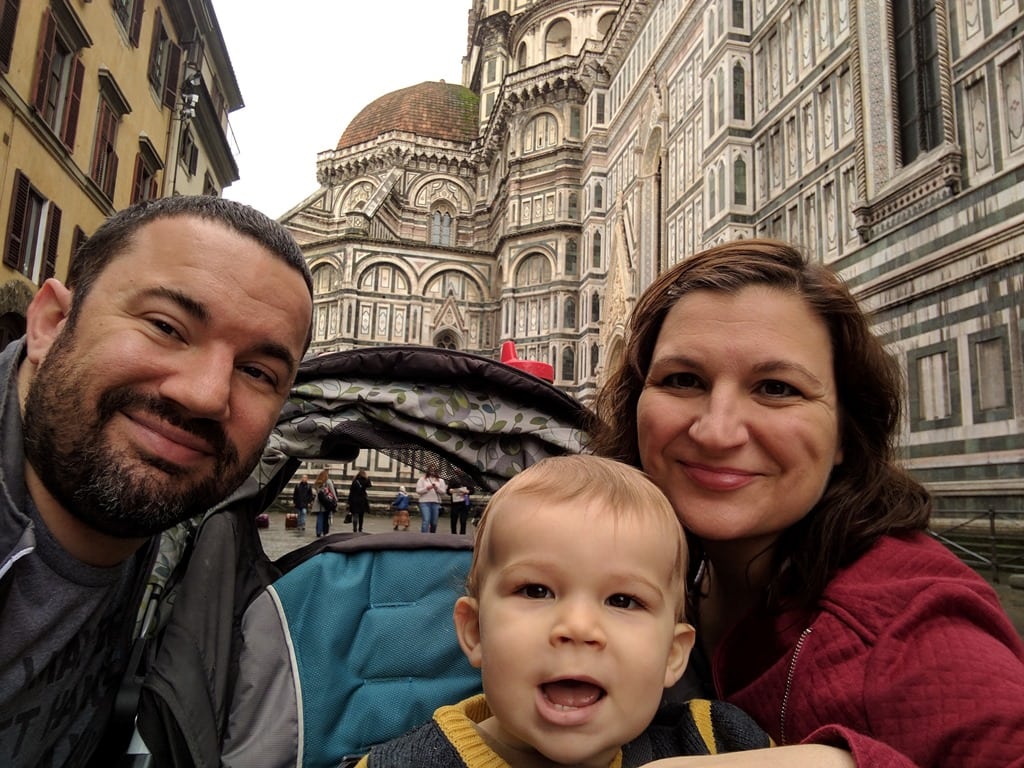 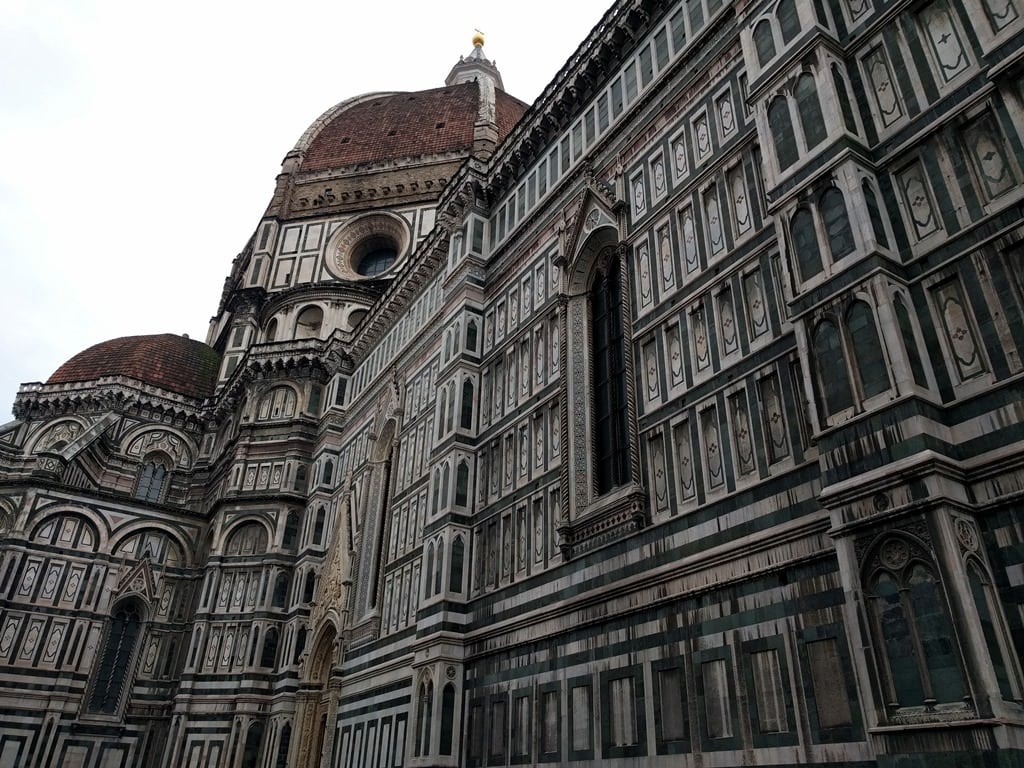 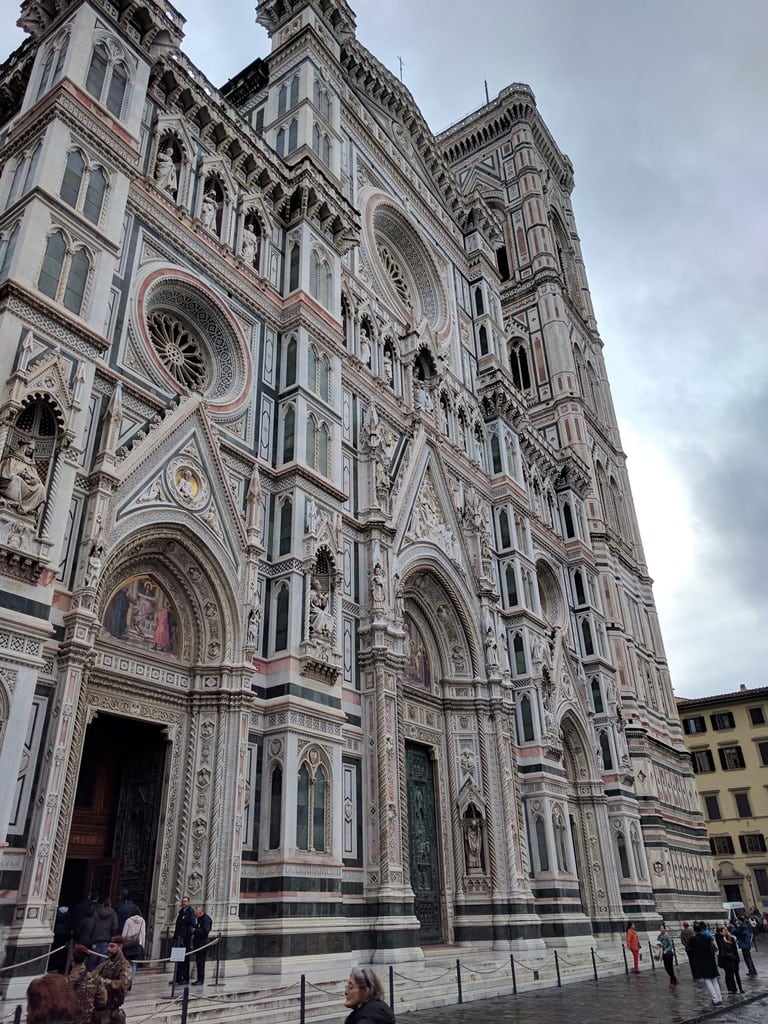 After that it was a short walk to Piazza della Republica, which is just stunning, and where an outdoor carousel can be found. I asked Matt to take a nice photo of Dex and me.

First, some background on Dexter’s carousel fear. When he was probably 4 or 5 months old, I took him to a work event at the Orange County fair. He was too young to do anything but I walked him around to look at all the rides and lights and got excited when I spotted the carousel – it was the first time he’d seen one. It was stopped, so we camped out on a nearby bench and excitedly waited for the kids to board so the show could begin.

When the horses started moving, Dexter LOST HIS MIND. It was the very first time in his short life he’d shown any fear from an external source. He was terrified.

Matt and I have tried him on a few carousels since. During his “ride” on the Dr. Seuss one at Universal, Dex desperately clung to my neck the whole time, and he tried a bench-style seat on a carousel in Pennsylvania when we visited there over the summer. He played along but clearly wasn’t enjoying himself.

Over the past few months, something has changed. Dex LOVED the carousel at Piazza della Republica. I started him on the bench seat, not sure how it would go, and as soon as it was over he ran over to a horse and begged to climb up. I gave Matt the universal hand signal for “buy another round,” and away we went. It’s hard to get a good photo of a moving ride with lights while outside, so these aren’t on Matt, but I think even with the imperfect photos, Dexter’s pride and excitement shines through. 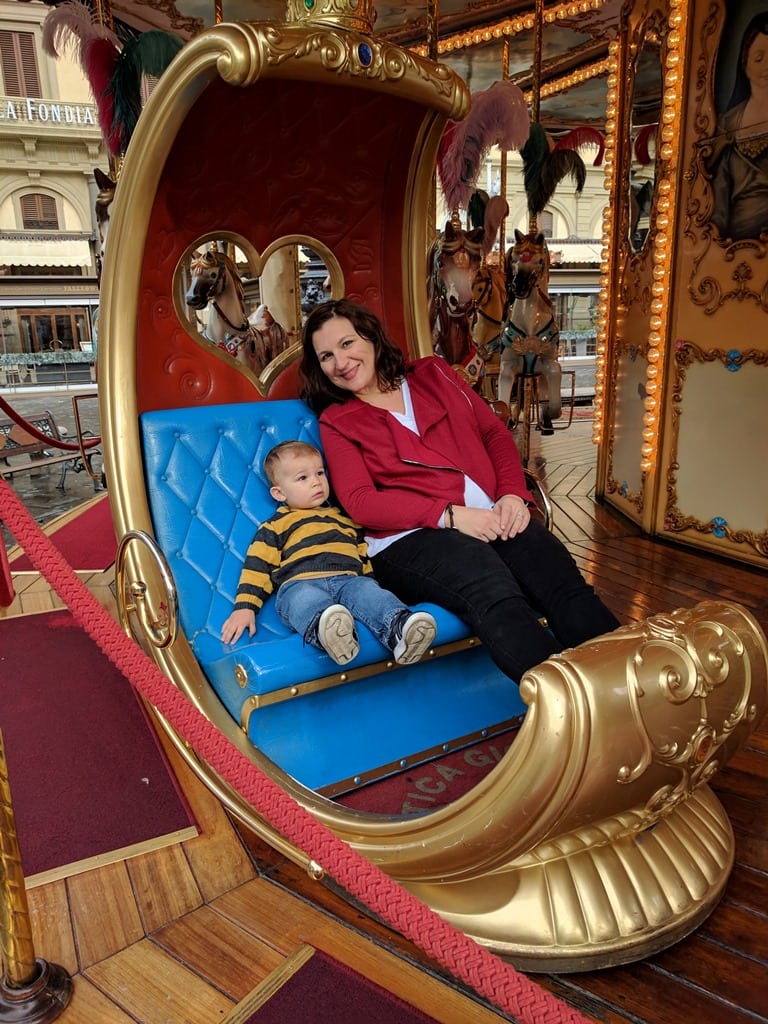 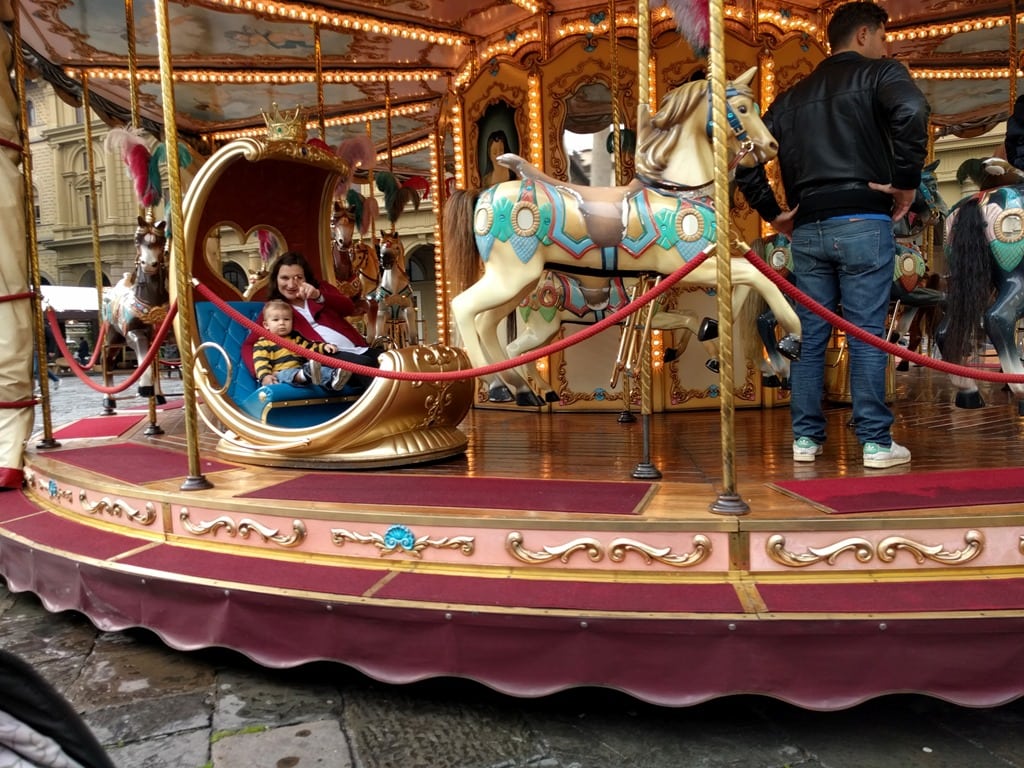 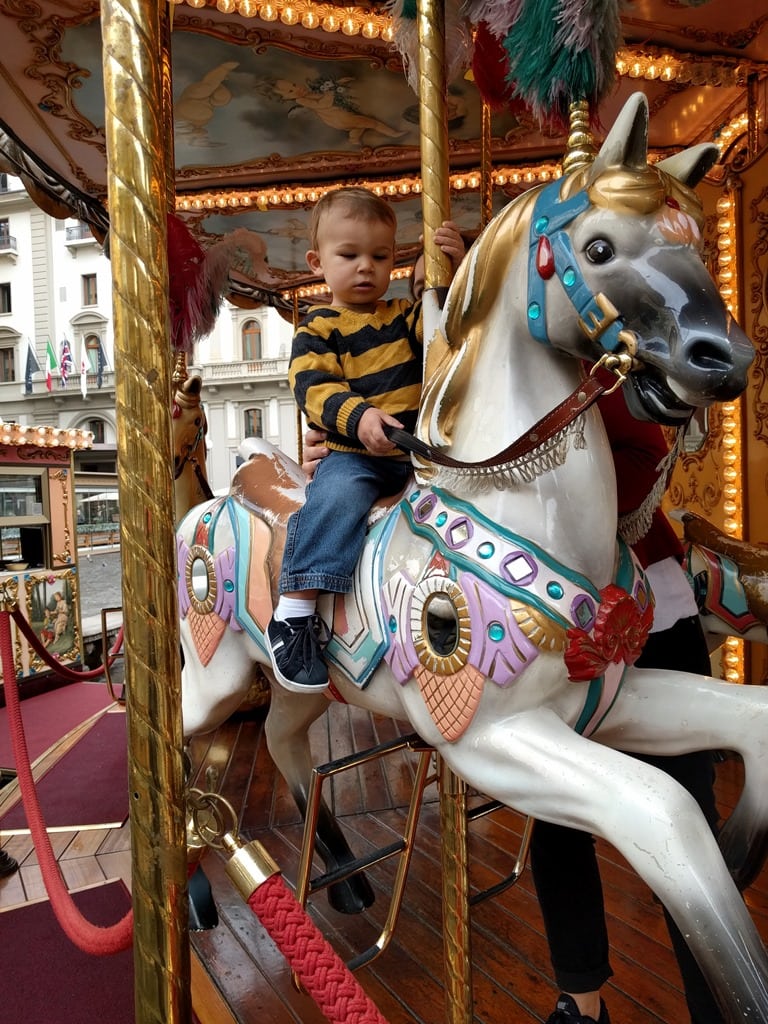 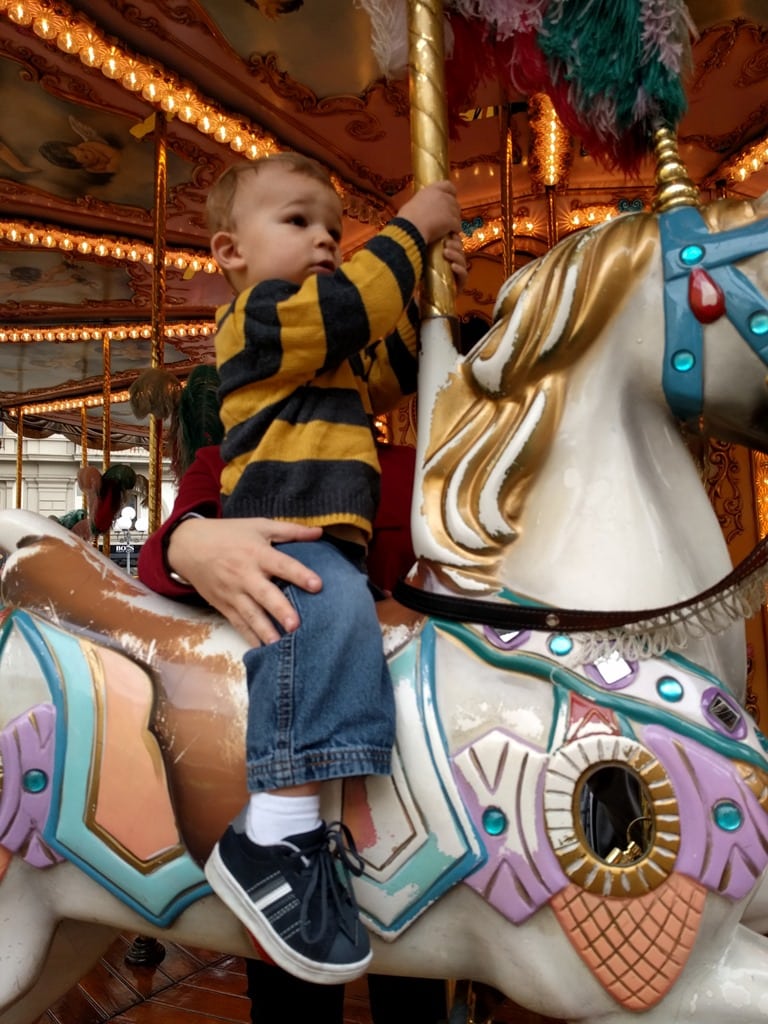 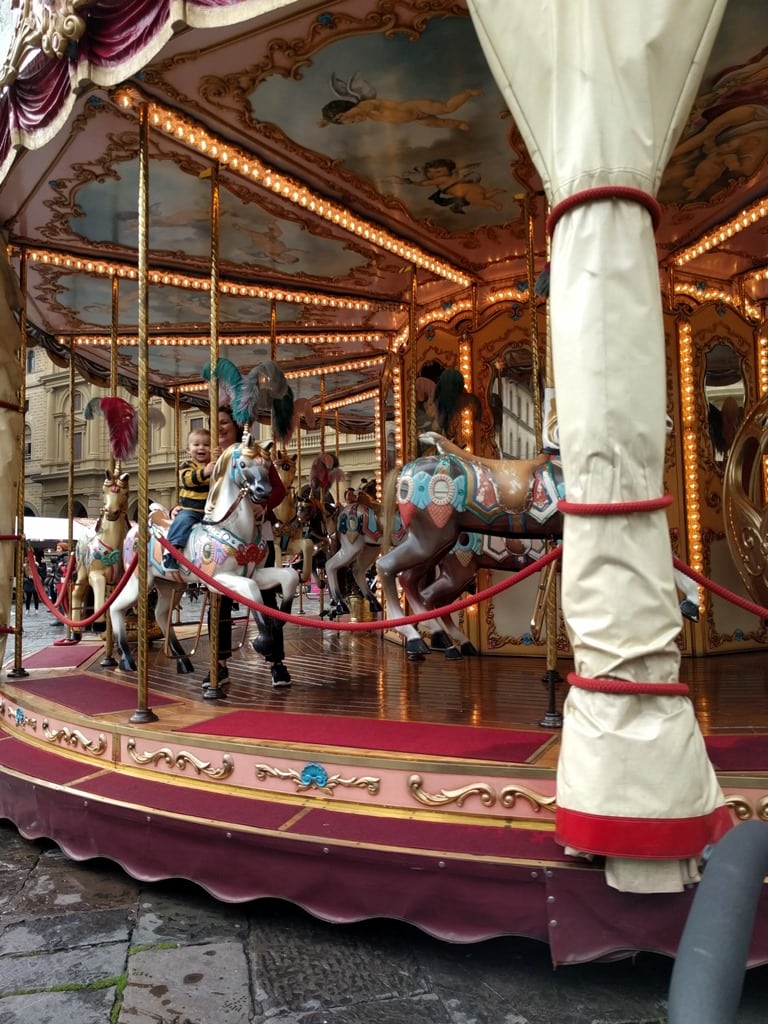 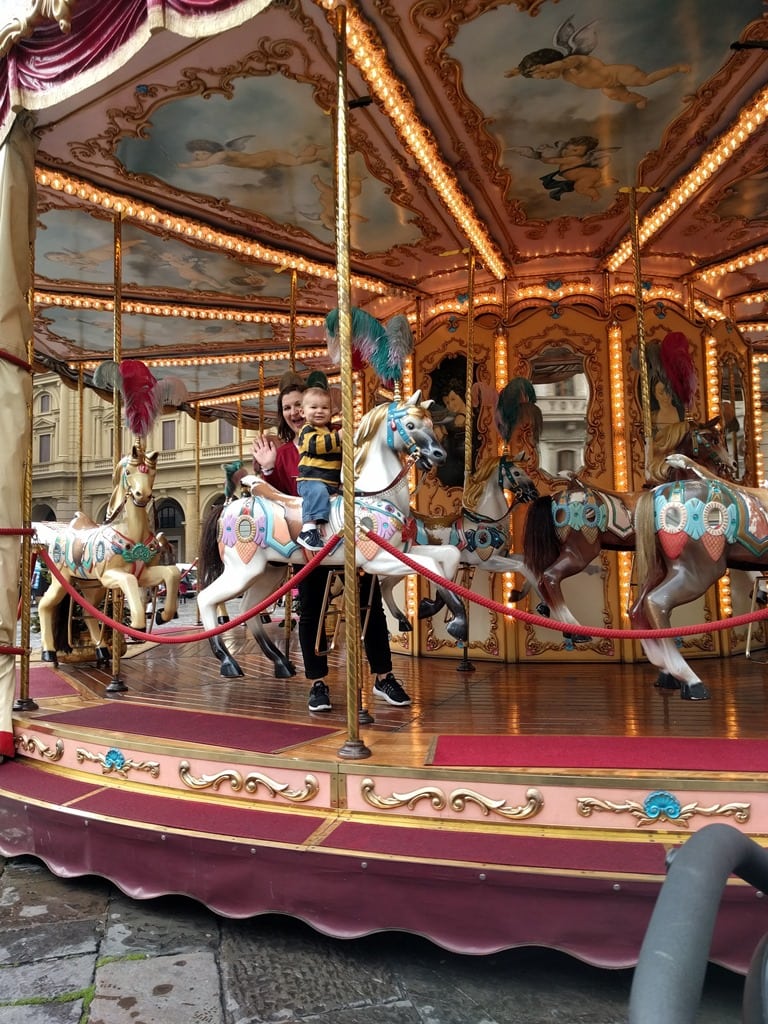 Turned out to be one of my favorite moments of the whole trip.

However, he developed a new fear: Vespaphobia.

Obviously, Florence is an ancient city with ancient streets – narrow, cobblestones, plenty of tight passages. It’s a far, far, stroller-unfriendly cry from Italy at Epcot, but we are adventurers, damn it, and soldiered on, making adjustments as needed.

The tightest spot was when Matt and Dex got stuck on this sidewalk with scooter parking. 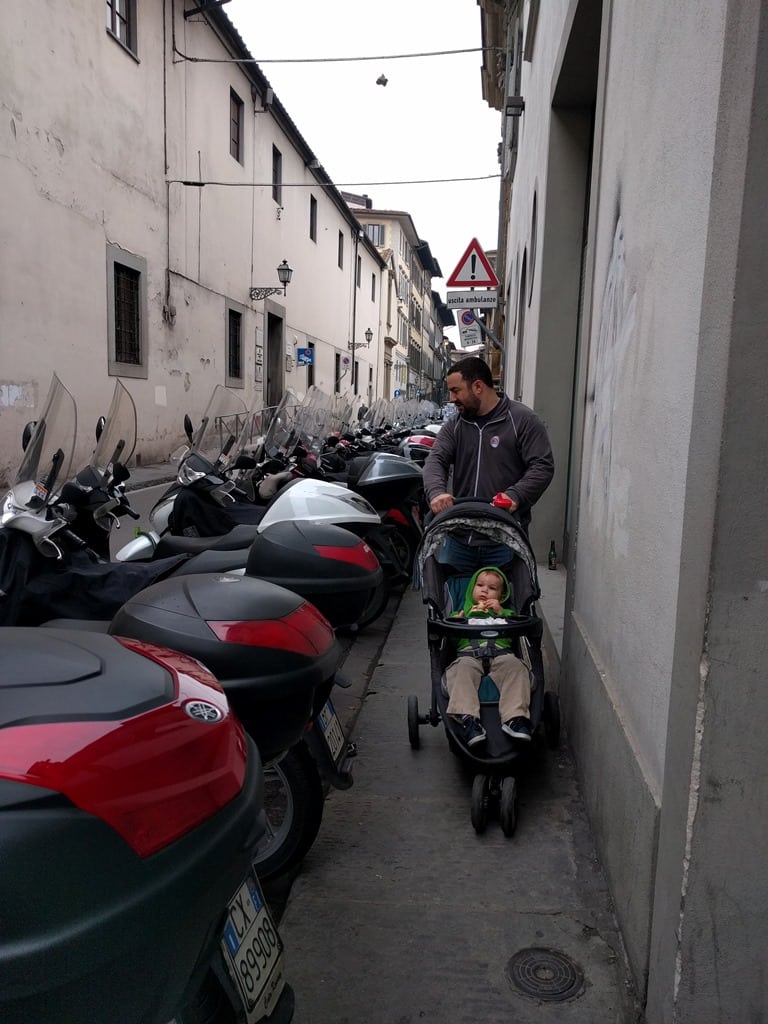 Halfway down the block we discovered one of the scooters was pulled to far into the sidewalk to go on, and Matt had to back up until he found a gap to the side were we could escape onto the street. To our surprise, Dexter panicked a little.

And for the rest of the trip, whenever we’d approach a sidewalk similarly lined with scooters, Dexter would shout, “NO NO NO” and so we’d reroute.

Hence, the Vespaphobia. Should be interesting to see how that one plays out as we continue to explore Europe, as scooters abound.

Next we’ll wrap up our trip to Florence with a visit to sixth-generation bookbinder, Galileo’s old bones, a beautiful view from on high and the story of how we were almost trapped in the city by a marathon.