Last year, Dexter met Santa for the first time at the EA holiday party  held at Matt’s office. He was much more interested in removing his socks than getting to know Claus, and his face was that knowing, “I’m just doing this to make my parents happy” smirk that he continues to perfect. 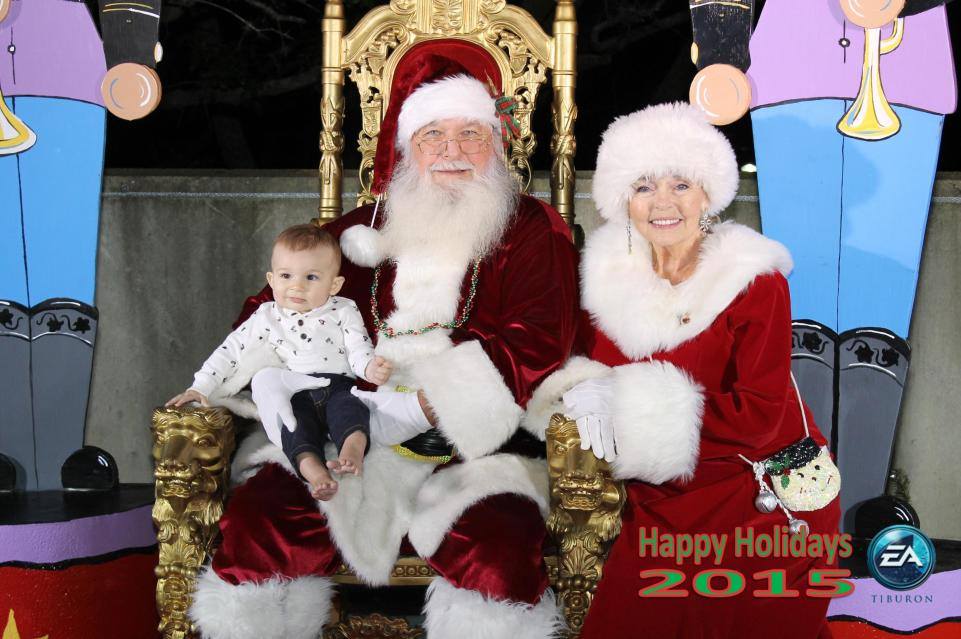 This year, as his is nature, things got more judgmental.

Meeting Santa is different in London. In the U.S., most parents take their kid to a mall where they stand in line forever before finally scoring that sweet sweet laptime. Photo, mom and dad pay, Santa gives the kid a candy cane and you’re on your way. Or, if you’re really really lucky, your husband works for a video game company that hosts a sweet rooftop Christmas party for employee families.

Here in the UK, they have Santa Grottos. Generally located within a department store or a mall, it’s more of a walk-through experience, themed out with Santa Time as the big finish. Some of them are incredibly fancy and elaborate, most notably Harrod’s. Once Dex and Cricket are both at least close to old enough to appreciate, we will jump through the hoops it takes to book tickets there because they’re really hard to get.

For 2016, we just bought tickets at our local borough mall and headed there. It was pretty simple – the “grotto” was really more of a staging area while you wait to meet Santa. We had to turn off our phones, so no photos, and put on silly reindeer hats, of which Dexter was surprisingly tolerant. Here he is looking solemn and judgmental afterward, all of us in antlers: 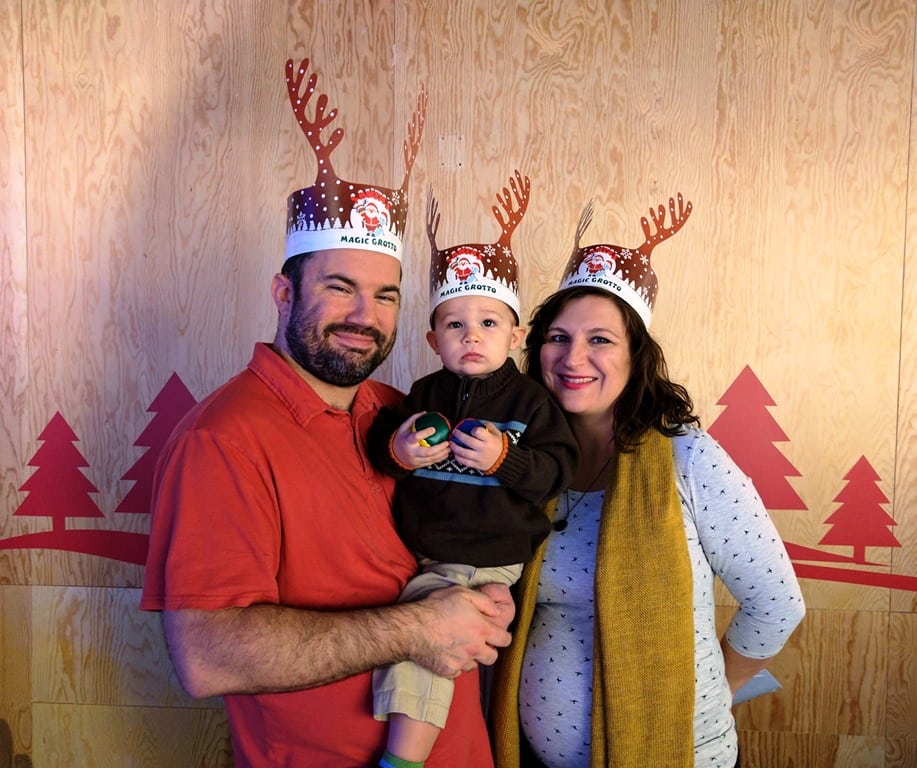 The grotto was just one room. There were young women playing elves (rather aggressively) with reindeer puppets and stuff. It’s kind of lame that you pay to get into the grotto AND pay for your photo, but you do get a decent toy. Dexter is holding his above – a set of three juggling balls. He loves them but was otherwise thoroughly unimpressed by Santa. 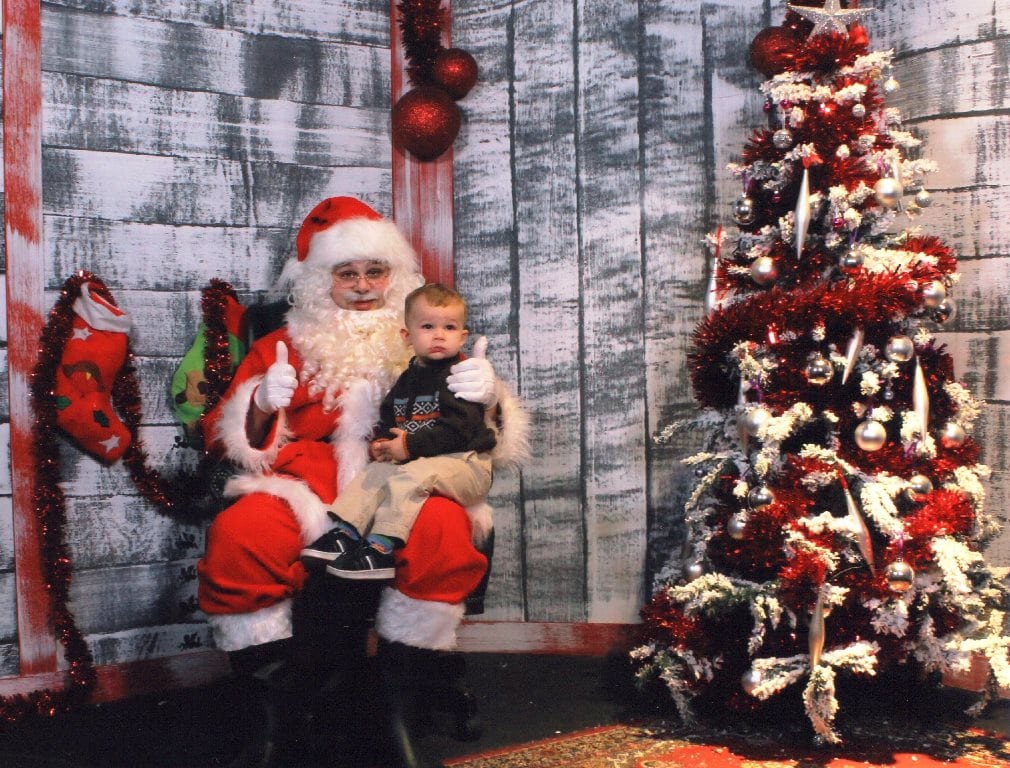 Santa gave the experience a thumbs-up, though!

Dex only started to warm up after it was over, toys in hand. Here are some photos of us playing around after we left the grotto: 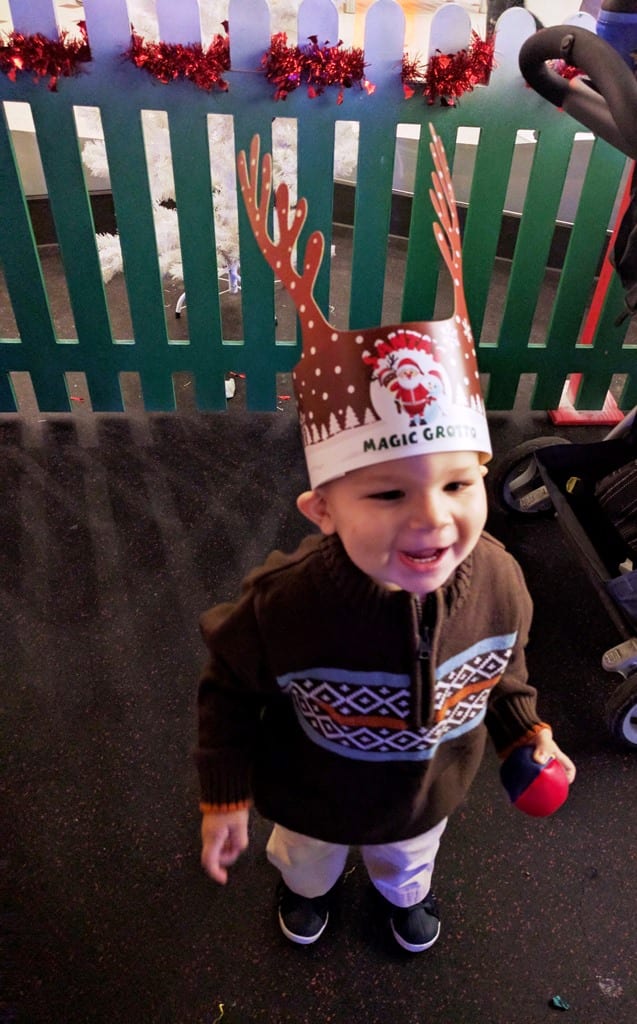 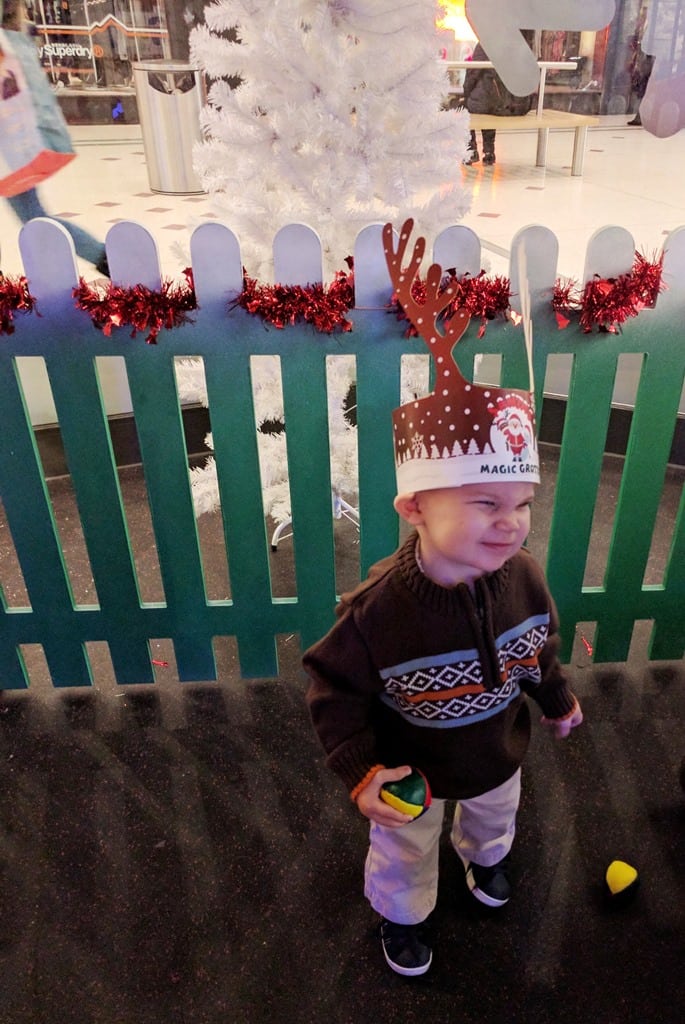 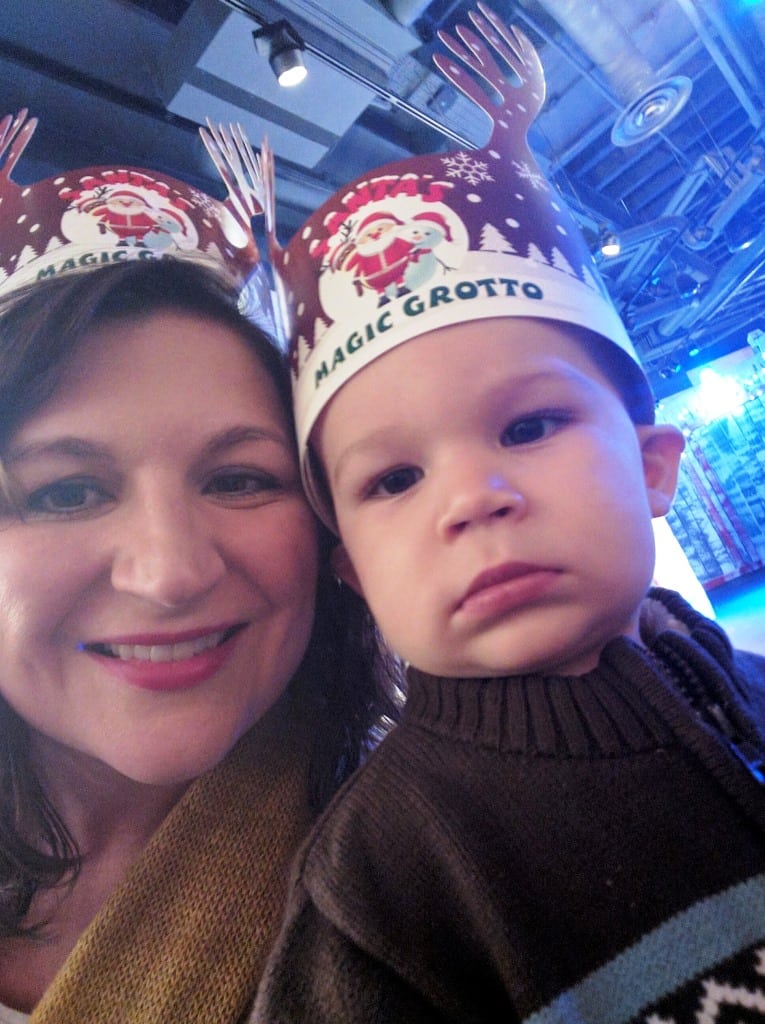 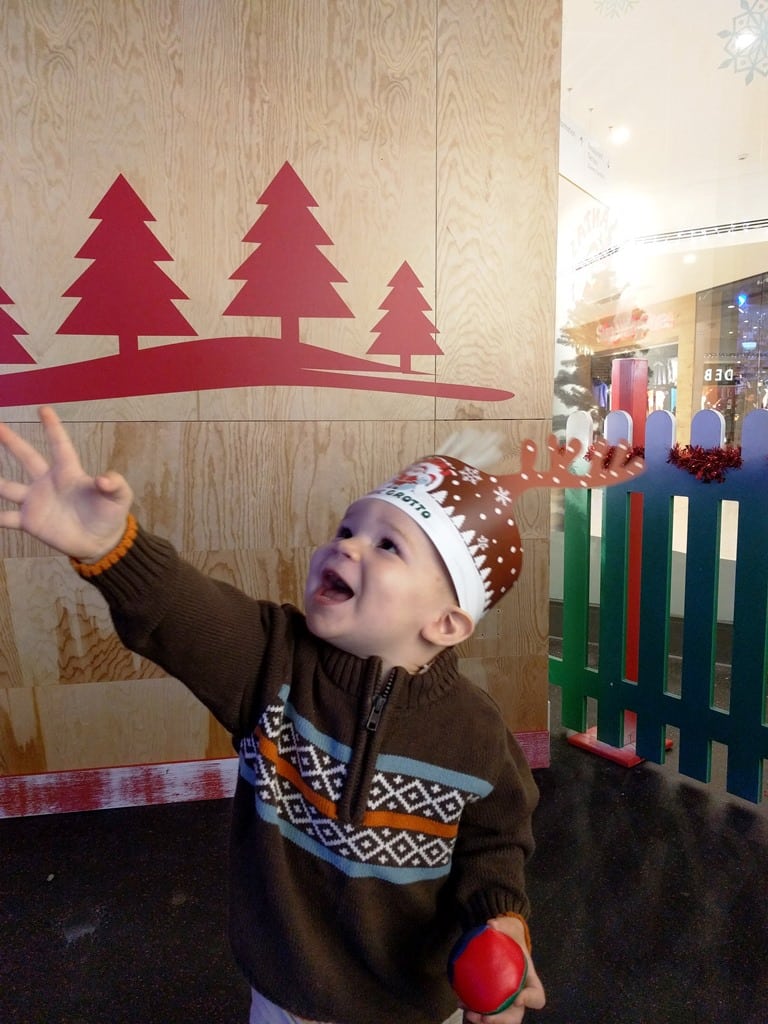 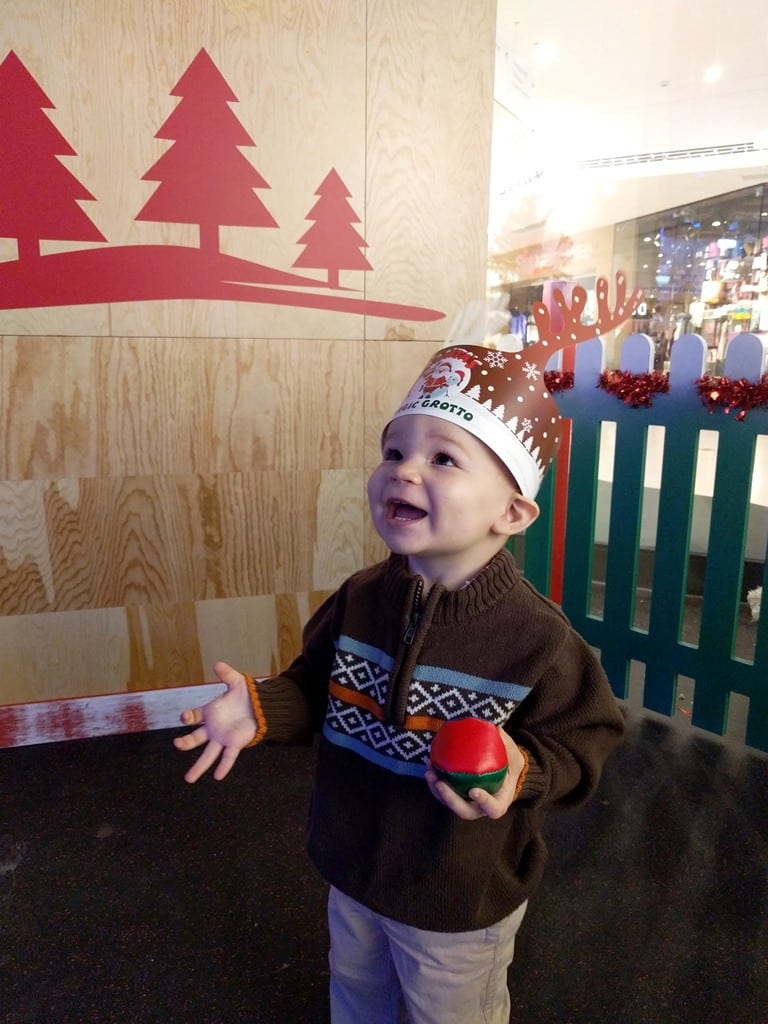 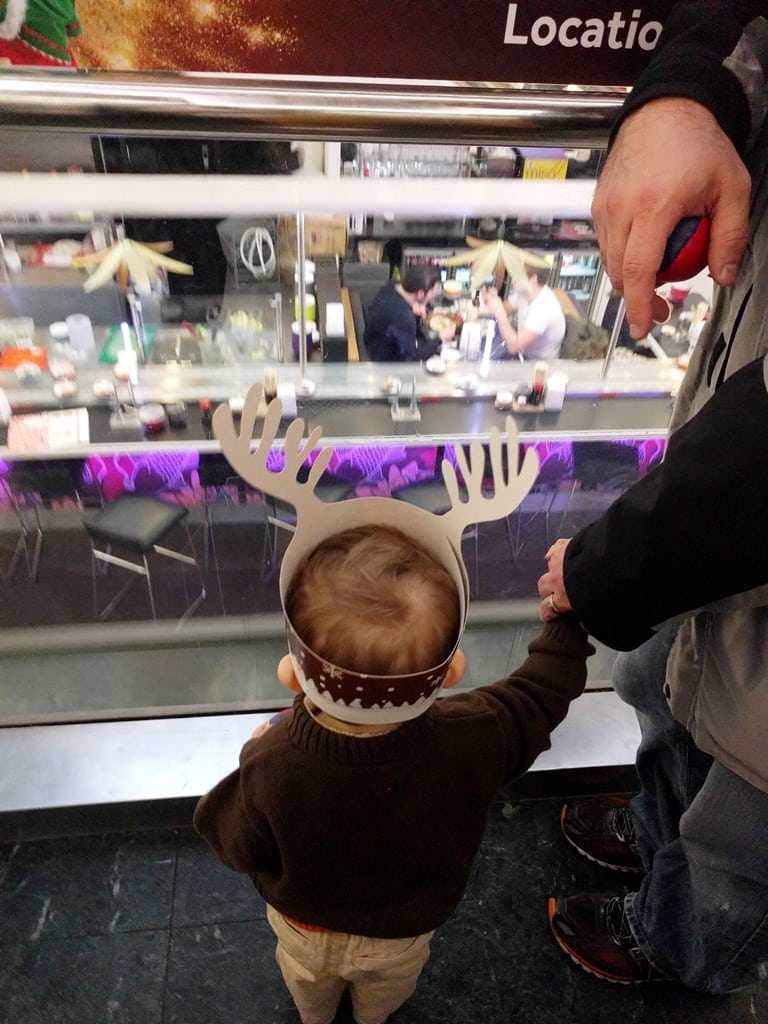 He loves that see-through elevator.

I wasn’t going to write much more about Tumbletots, because I have no life right now and it’s the only weekday thing I do, so I feel like I talk about it all the time.

The last one before the holiday break was Christmas-themed and it was SO ADORABLE.

They had a tent filled with stuffed toys and Dexter became attached to a little pink pig in a tutu. 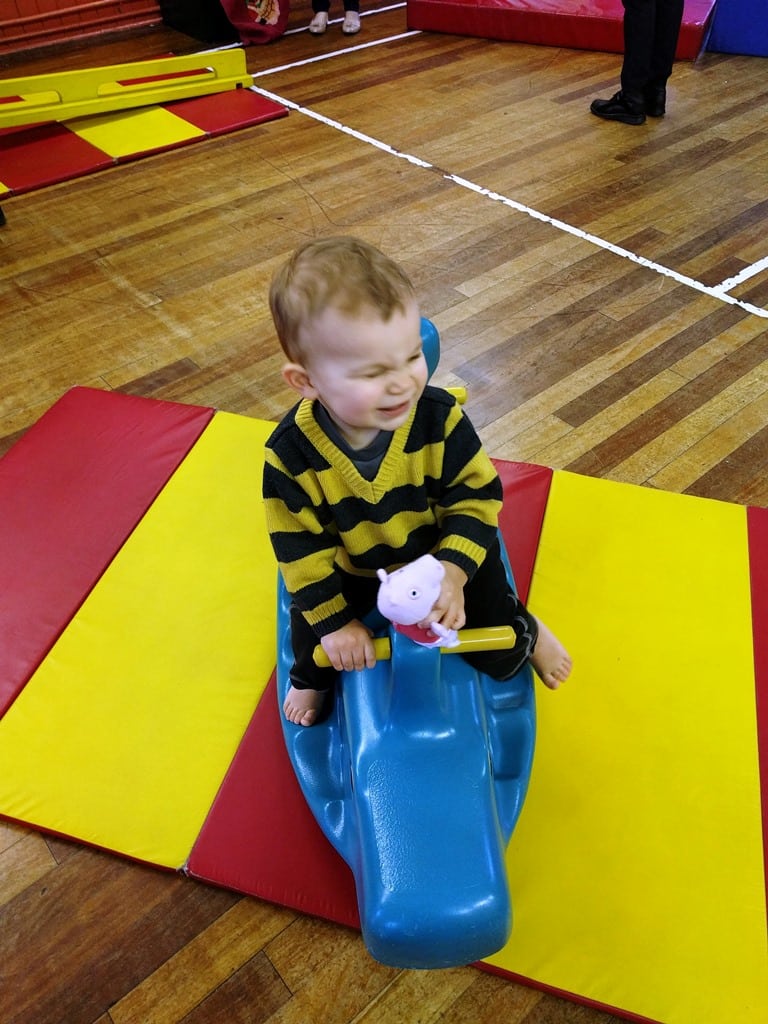 Then he fed Rudolph “carrots.” 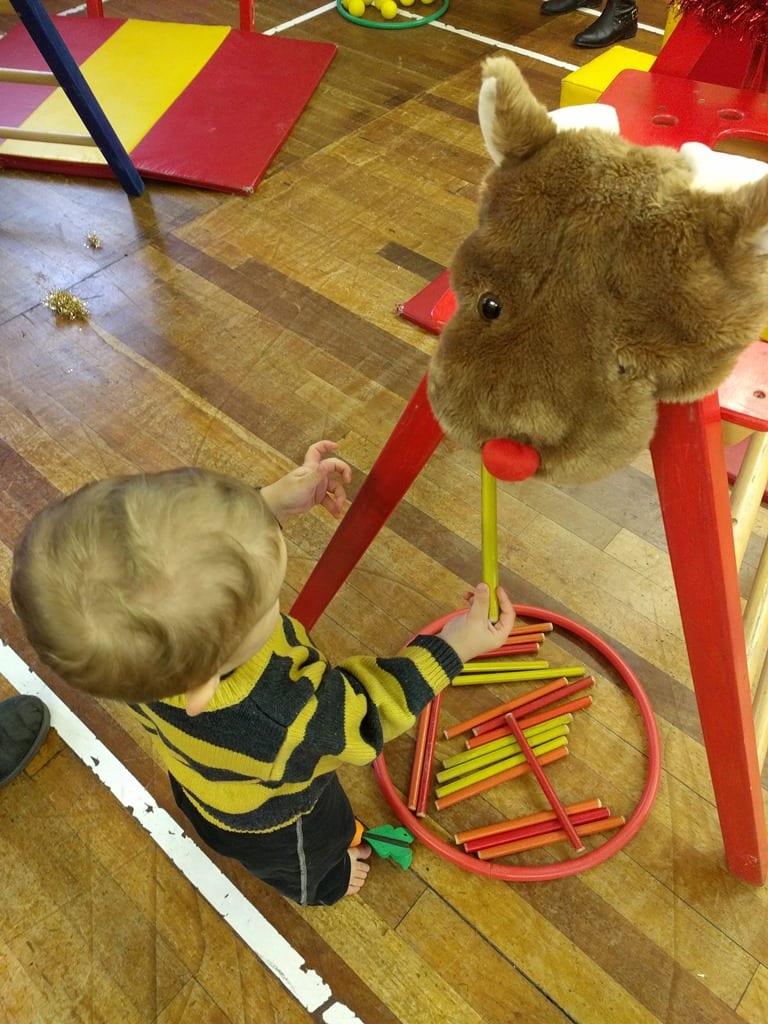 They had a snowman made of hula hoops for the kids to throw “snowballs” through. This is pretty much Dexter’s platonic ideal of fun right now, and I had a hard time dragging him out of this corner. 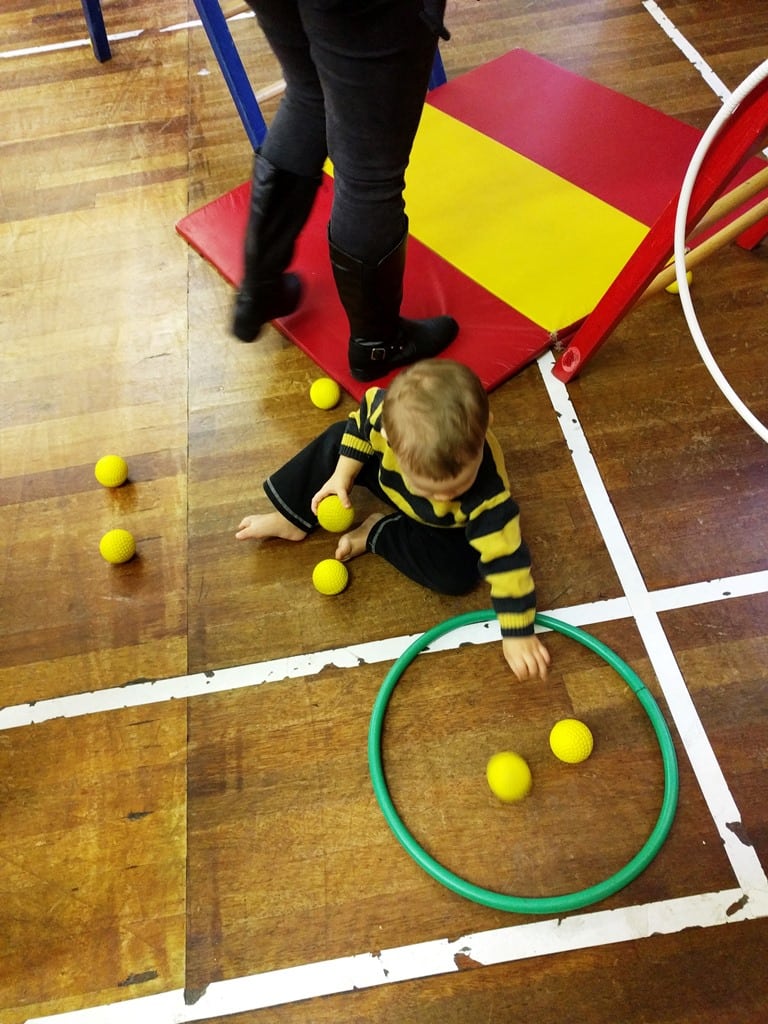 Glad I lured him away, though, because he looked pretty boss driving the sleigh. 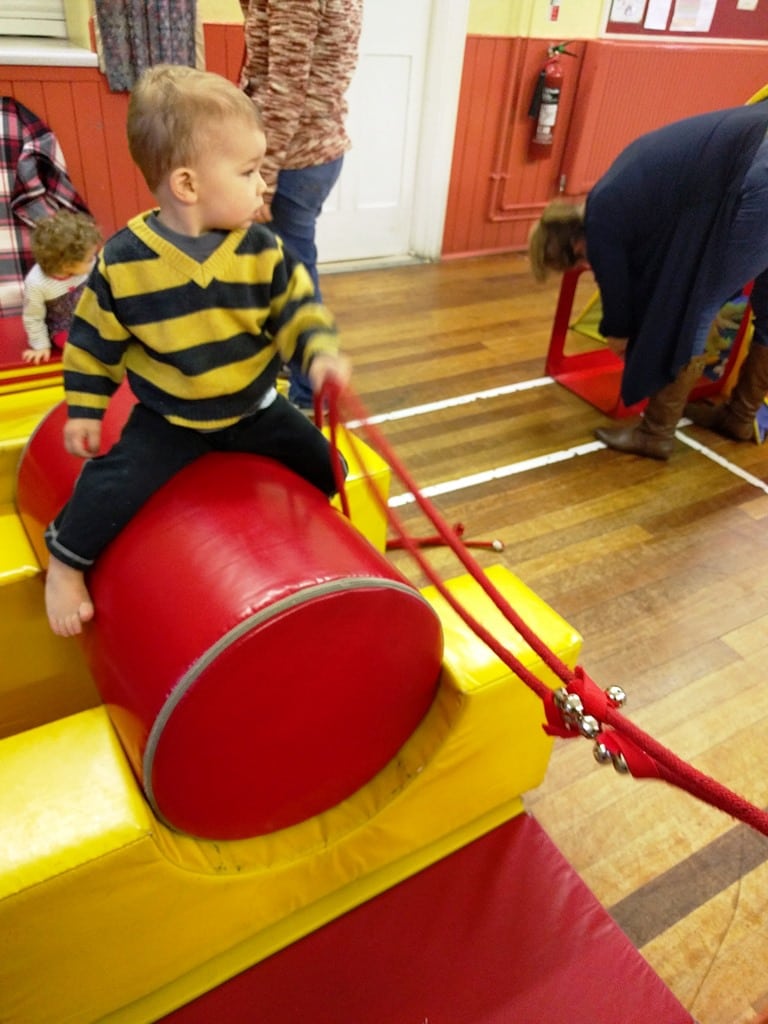 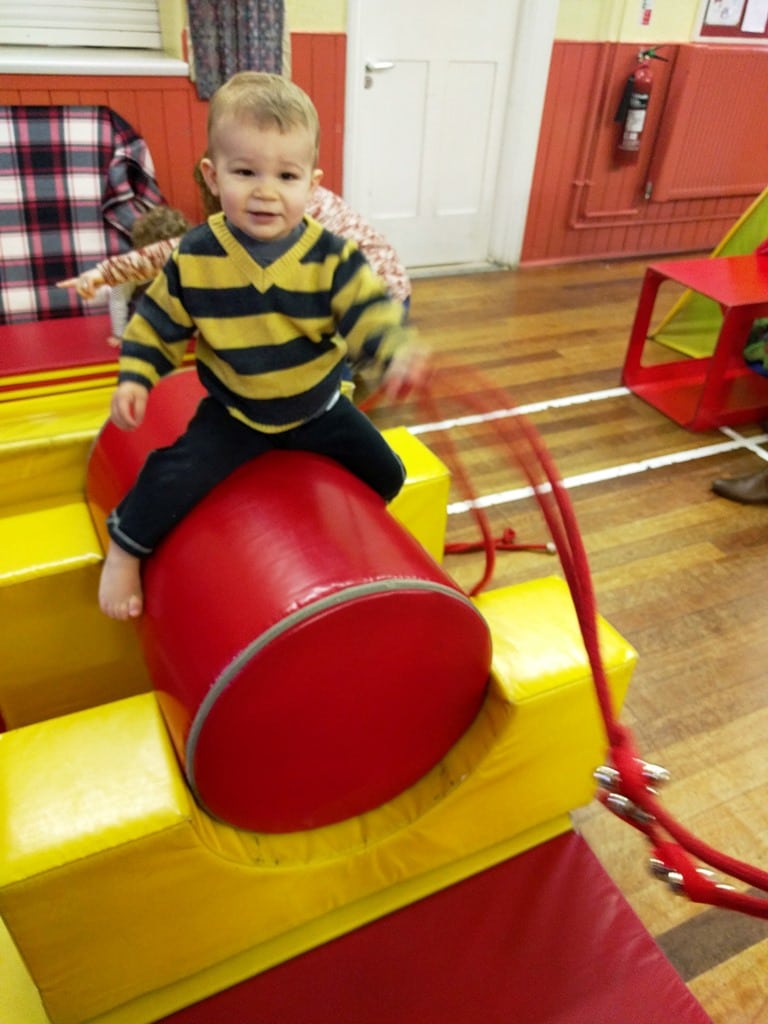 They had a tree Dexter was actually allowed to touch, unlike at OUR HOUSE. 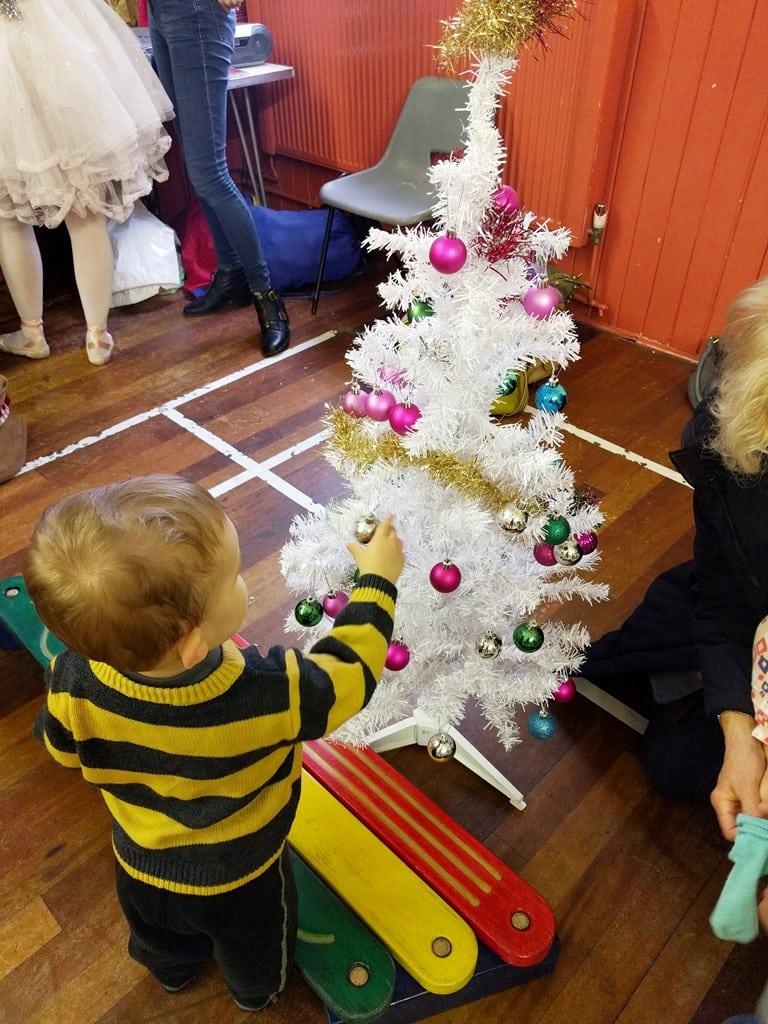 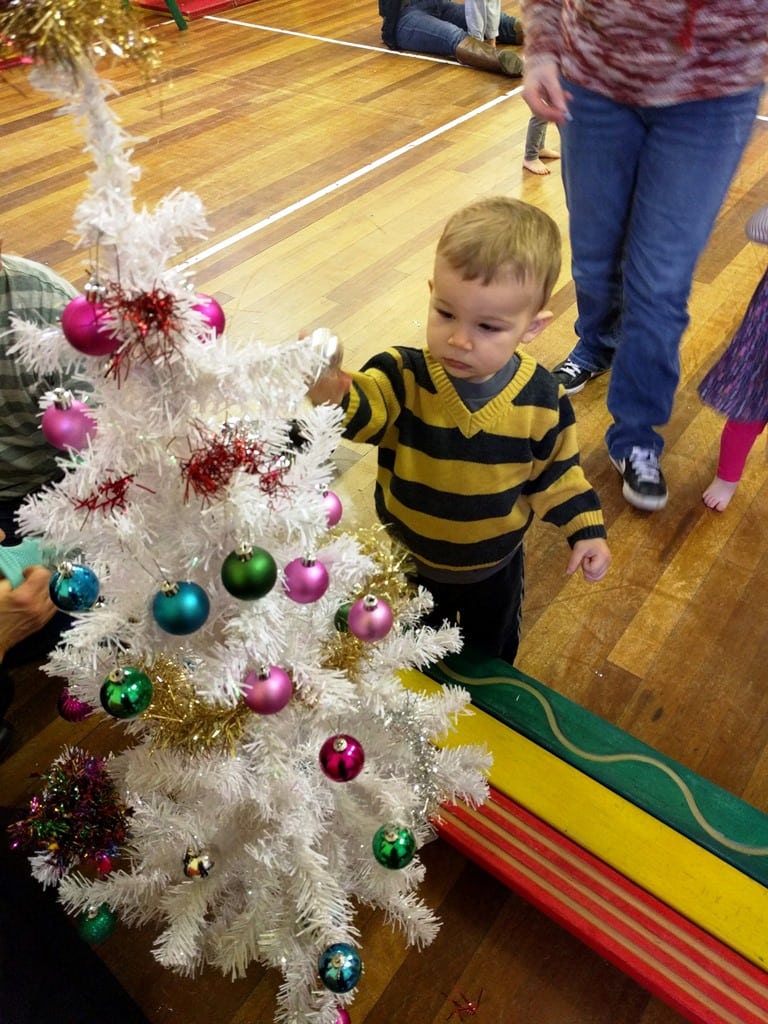 Father Christmas made an appearance at Tumbletots, too. 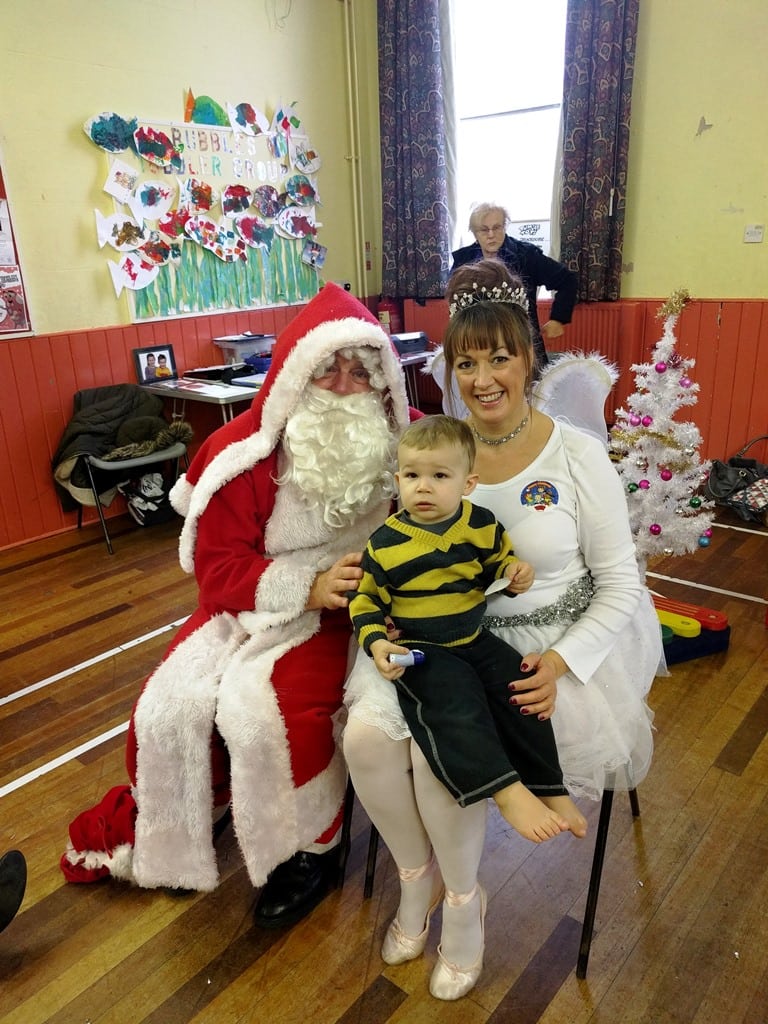 Last but not least, they brought out a PARACHUTE. Remember how great this was? Dexter seemed to innately understand that he was in for awesome because while I was awkwardly hauling my belly up from the floor, and all the other kids were cautiously approaching with their parents, Dexter ran over and grabbed the edge like he’d been doing this every day of his life. 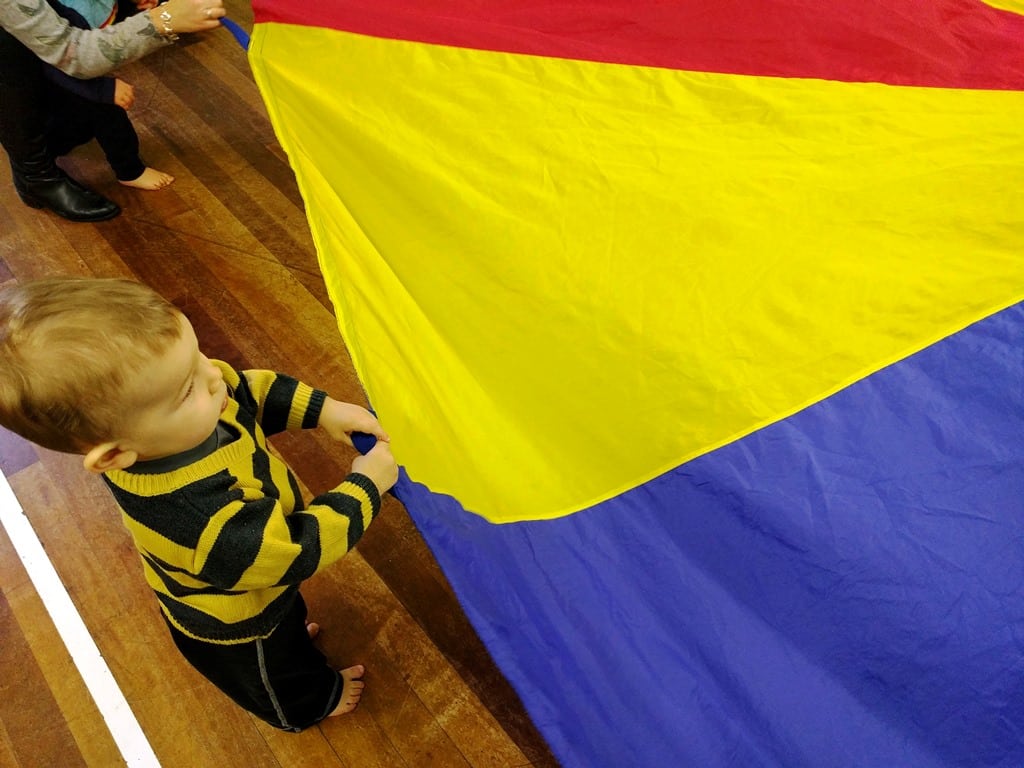 As mentioned, Dexter is super into playing with balls right now. He was already having a ball with the parachute but then they brought out a bag of plastic balls and dumped them on the chute, shaking the fabric so they’d jump like popcorn, and I legitimately have never seen Dexter so excited about anything in his entire short life. He was screaming with delight.

I was pretty delighted, myself.