I’ve written at length how independent Dex is. He is daring and resourceful and does not really have time to snuggle more than 4 seconds at a time. So it is interesting to see Dexter start to exhibit some signs of separation anxiety, mostly with me – he’ll cry when I leave a room or stop in the middle of an activity to run over and hug my legs or kiss my knee (this stems from me asking him to kiss it once after I bumped it and I guess he thinks it’s just something people do). Dex shows a preference for me to be the one to put him to bed or carry him up the stairs. Which is unfortunate timing, as my pregnancy is hitting the point where it’s getting difficult to do some of those things, but it’s still very sweet to experience.

At the same time, he’s growing more independent in other ways, namely in having an opinion about things. Dexter has always been opinionated but also mostly laid back, ultimately going along with whatever mommy and daddy want. NOT ANYMORE. Dex questions why he has to sit in his high chair to eat and why he ever has to exit the bathtub and man alive, the battles we have to put on his coat or strap him into his stroller. The kid is fierce. 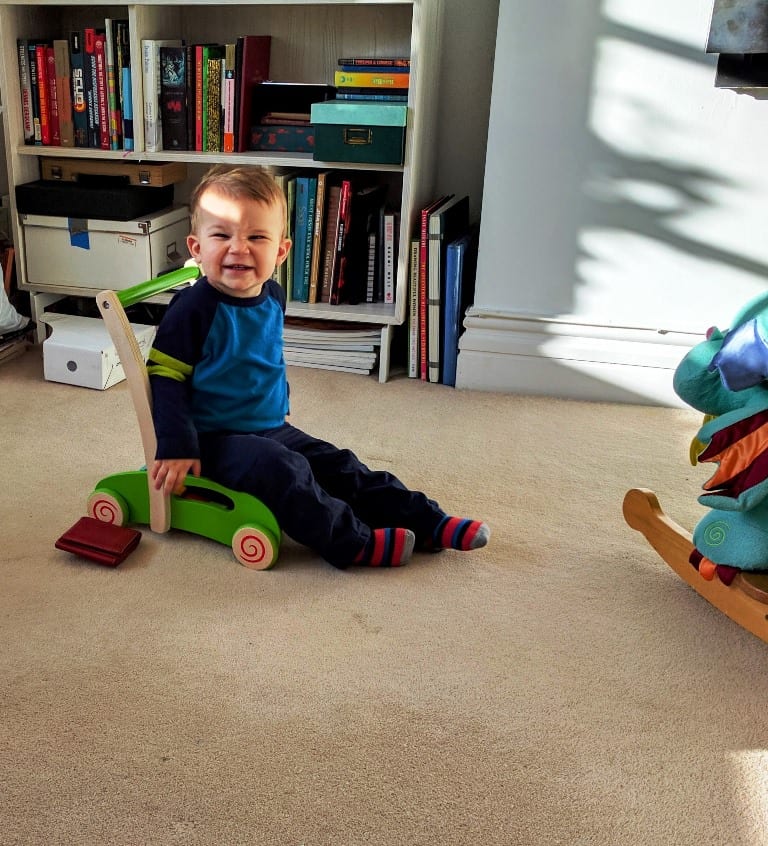 Shortly after Dexter started drinking out of a sippie cup, so around 10 or 11 months, I think, we taught him “Cheers.” It never waned. Dex loves to clink glasses and say “Cheers!” but we’ve created a monster because now he “Cheers!”es everything. So far today I’ve “Cheers!”ed a grape, a piece of toast, my coffee, a forkful of eggs and a NAPKIN. We cheersed a napkin. Dexter and his angel face could get away with cold-blooded murder. 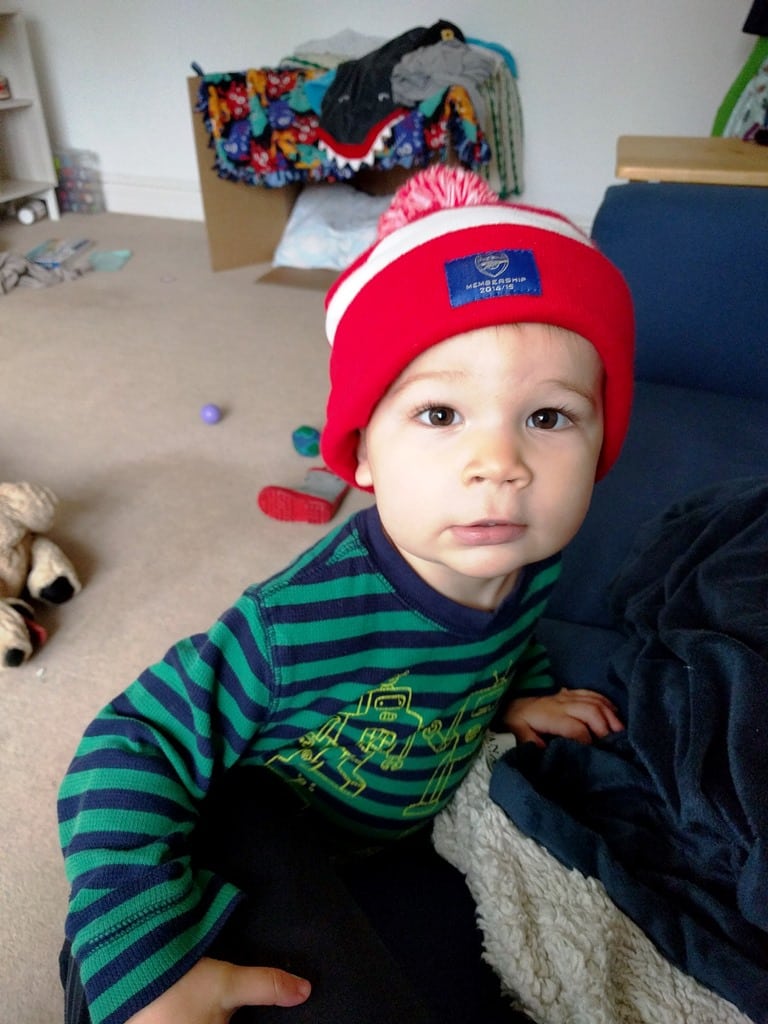 Dex is still adding words. I told you last month he thinks the dots on “i”s are “balls,” and I got it on video.

He’s getting better and better with “please” and “thank you” and he nearly has the post sneeze exchange (achoo! bless you! thank you! you’re welcome) down.

Dexter’s favorite thing in the world is his Baby Signing Time videos, and because I’m a mean mommy/responsible parent watching his screen time, I limit him to one a day, but he begs to watch them nonstop and he is continuing to add signs, which is fun to see. I am fairly certain every parent+child on the planet plays the game where one pretends to be asleep and the other must do various things to wake the fake napper, but Dexter takes his sleep acting to a whole new level by adding snoring noises, which is superb. In other news of pretend, does a better imitation of an elephant sound than me.

One of the most most startling and rewarding development points over the past month has happened at Tumbletots, which he still adores, even if he picks the most boring thing and just walks up and takes tiny steps down, over and over.

Every single toddler gathering in the UK has at least one circle time, where you gather ’round and there are songs and dances. I think circle time is mandated by Parliament. Anyway, Dexter was always game to sit there but never participated, choosing instead to stare at everyone with a bewildered look on his face. Now he jumps up and claps and bends and stomps and has a ball – it’s a small thing, but the first evidence I’ve seen of him taking instruction from an outside source and participating.

This month, Dexter visited Florence for Thanksgiving, got his second haircut, and met Santa Claus. 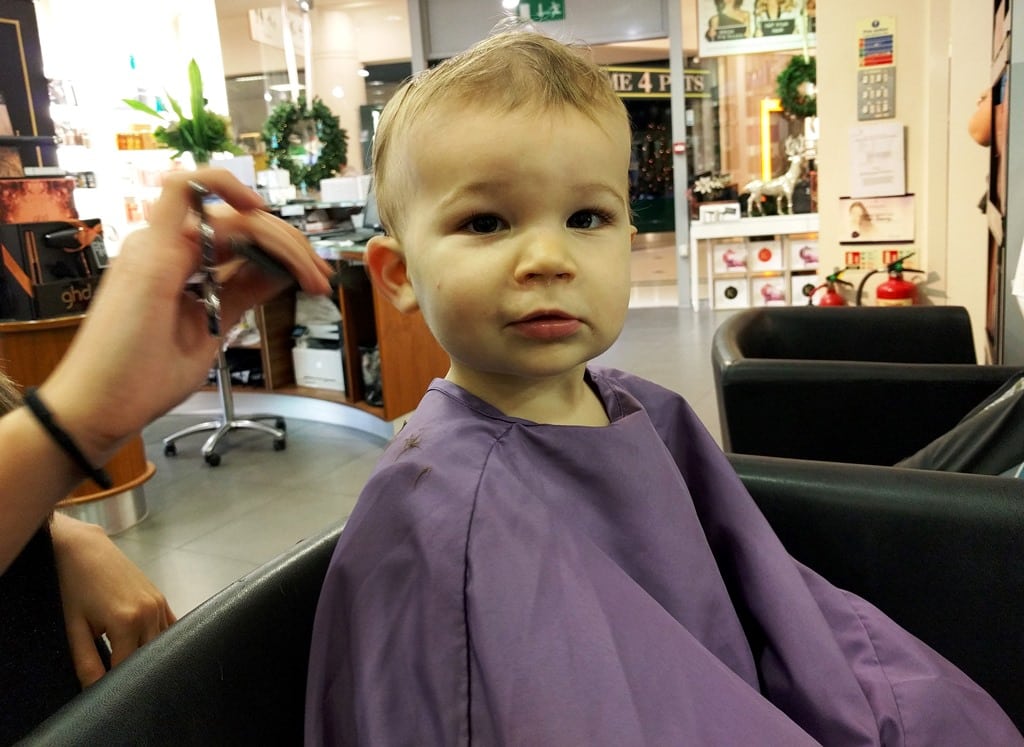 Oh, I almost forgot the funniest first of all: Dexter’s first trip to the dentist. The trip there involved another stroller battle and a long sit in the waiting room filling out paperwork, so to keep the willful toddler reigned in, I fed him a steady stream of cashew nuts, which are probably his favorite right now. When we got back into the exam room, I’m not sure what he thought was happening, maybe that he was headed to fat camp? but as I lifted him from the stroller, he systematically shoved cashew after cashew into his mouth like he’d never see them again.

To the surprise of the dentist, Dexter passed on sitting on my lap (independent!) and climbed into the chair himself, tiny hands placed on each arm, little legs stretched out in front of him. He was a little hesitant to lean back but we got him to recline, and then sure enough, Dexter opened his mouth and the dentist examined his teeth through a mouthful of partially-chewed cashew nuts. It looked like he had broken teeth rattling around in there with his regular teeth. It was mortifying. The dentist was not amused. I laughed my ass off as soon as we were outta there.

Usually, I end these with a schmaltzy message about how much I love Dexter (OMG I LOVE HIM SO MUCH, ok, that’s handled) but for 20 months, I’m ending it differently. I will conclude with something that like “Cheers!” began spontaneously and now has sunk in and spread and we do a version of it at every mealtime: The Pasta Dance.

Feel free to Pasta Dance at your family meals, as well!