Last week, I did something I haven’t done in a long time. I visited a library in person, and slowly browsed the shelves, choosing books to read simply because they looked interesting. 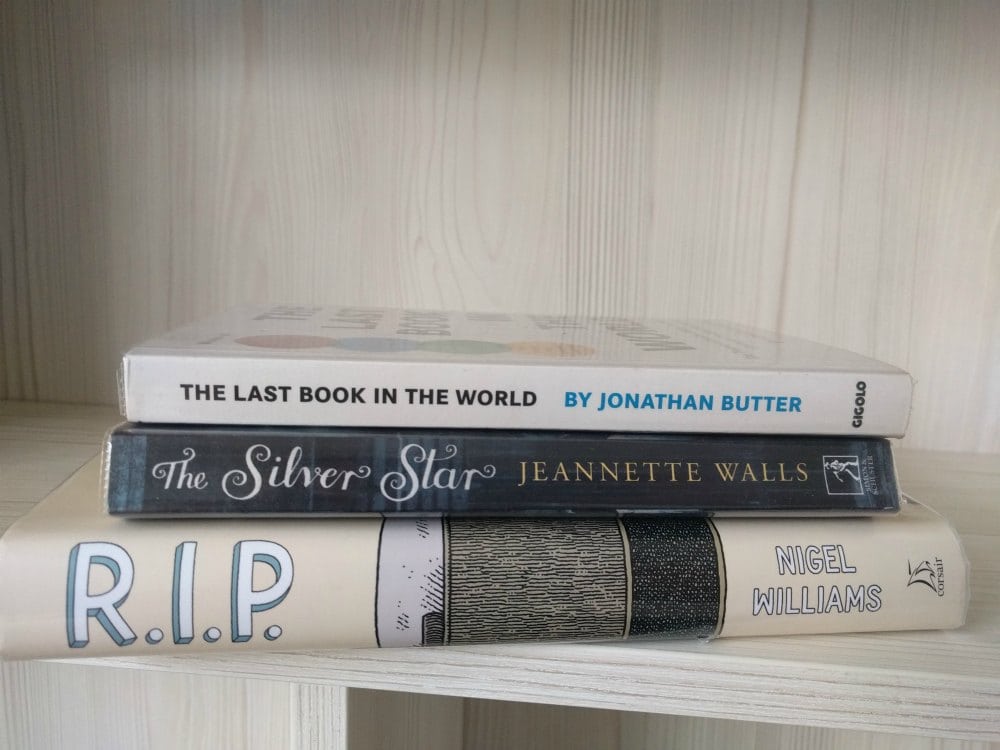 The library system in Orange County has things on lock. I could order books from any branch and have them delivered to my house, for free. The only time I had to go near an actual library was to return them and I’d drop then in a machine outside. Don’t get me wrong – I love libraries, and love visiting. But I was a mom and a wife working full time and playing a sport and there’s only so much time in the day, so I was a slave to my Goodreads To Read list and the Orange County library website. And it was a great system, one of the non-person things I knew I’d miss the most about Orlando.

I was curious to see what the deal would be here and as I suspected, it’s not quite as cushy. I can order books to my branch from other branches but it costs 80 pence per, so I have to make good choices. But I can browse my local branch to my heart’s content, and I actually like that it’s on the small side – just three floors – because it’s not as overwhelming.

Pictured above are my selections. We’ll see how I did, but I’m partway through RIP and loving it, so hopes are high.

In honor of my brand new British library card, here are my previous years’ picks for top books of the year, all in one tidy spot. Future lists will be posted the blog as well, and I might even try my hand at some reviews as I go along.

TOP 8 BOOKS OF 2015
Station Eleven – well-written, solid post-apocalypse story that made me realize I only care about the nuts and bolts of when society crumbles. Why did it happen? How did the downfall play out, exactly? This book touches on that, but from a limited, character point of view. Double recommended for theatre types.

The Rosie Effect – sequel to The Rosie Project and it wasn’t quite as good but still thoroughly enjoyable. I like this main character, this awkward nerd, and the ridiculous way he approaches life. If you don’t, you won’t like these.

My True Love Gave To Me/Let It Snow – these are both holiday-themed short story collections from YA authors and it’s impossible not to lump them together. As always, some stories were better than others but both were solid reads all around. I read them in the summer, for some reason. I kind of recommend that.

Modern Romance – I am an Aziz Asari fan and loved it, but I will say my professional life got in the way. I do a LOT of reading and research on online behaviors and I think if I didn’t, the book would have been a little more surprising and engaging for me. Still, clever and fun and funny.

The Girl on the Train – this book got a lot of publicity and it was pretty gripping. It’s frequently compared to Gone Girl, and I liked Gone Girl better.

Irritable Hearts: A PTSD Love Story – this book had problems but was still a good read that provides a service, exposing the day-to-day reality of people who have PTSD. I was diagnosed after my miscarriage and that made this challenging (although I was nowhere near as severe as the author) because I related to it deeply, especially the parts about not feeling like you’ve “earned” your diagnosis.

I usually do a Worst Book I Read This Year but there were so many. Avoid: Friendswood, Bel Canto (possibly controversial? I just thought it was SO BORING), Everybody Rise, The Invaders and Whisky Tango Foxtrot which could have been SO GOOD but then ended just as it should have been getting started.

TOP 10 BOOKS OF 2014 (man, this was a good reading year)
The Rosie Project – Clever, creative plot. Easy read, charming characters. And I just found out there are sequels coming out. Yay!

Life After Life – Probably the best book I read all year. Smart and mysterious and suspenseful with a strong protagonist. Loved it loved it loved it.

This Song Will Save Your Life – A sweet and sharp YA novel about friendship and music. I can’t think of a teenage girl who wouldn’t enjoy this one.

The Rook – I pitched this to people by telling them the truth about how it begins. Main character wakes up in the middle of the woods surrounded by a circle of dead bodies wearing blue rubber gloves, with no memory of who she is or how she got there. She finds a letter in her pocket… from herself. Strap in and enjoy. (Another one that apparently has a sequel on the way!)

Daughter of Smoke & Bone – This is out there, for me, for fantasy. I’ll do the dystopian stuff but when you get into monsters and demons and magics and the supernatural I’m usually out. Not this time. Great story, great characters. Sad and scary but also funny and fun. It’s a trilogy, and I read all three, but the first was my favorite.

We Were Liars – Don’t read any reviews. Just read the book. Trust Jamie.

Lost at Sea: The Jon Ronson Stories – A weird and witty collection of strange stories. Henry Rollins and his thing for aliens, the sensitive side of juggalos and a town where every day is Christmas. Thoroughly enjoyable, easy bite-sized reads. I think this would be excellent for commuters.

World of Trouble (The Last Policeman #3) – The first of this trilogy was one of my favorite books of… 2012, I think? I read #2 and #3 in 2014. It’s the story of a police detective compelled to keep doing his job, as a world-ending asteroid plummets toward the Earth. It’s dark but not as dark as it sounds. Gritty and engaging. Loved the whole trilogy.

Afterworlds – This is the guy who wrote The Uglies series. Afterworlds is about a young author about to make it big in the YA scene, and the book alternates chapters from her real life with chapters from her book. A gimmick I could see people hating but I enjoyed it quite a bit.

Rules of Civility – I really like to read books from the 30sm, 40s and 50s because I’m a sucker for the dialogue. Rules of Civility doesn’t disappoint on that front, plus it offers a wonderful narrator, her fascinating friends and a little of the “career girl” type feminism typical of those times.

TOP TEN BOOKS OF 2013
The History of Us – Leah Stewart is one of my Top Ten favorite authors, and her newest release was pretty great, as usual.

So Much Pretty – I can’t say much about this book without giving away major spoilers but I absolutely loved it and that fact made me wonder if I’m sick in the head.

Gone Girl – My first Gillian Flynn was Sharp Objects, which I was “meh” about. I’m so glad I gave Gone Girl a chance because I adored it. Just like everyone else in the universe.

Beautiful Ruins – Gorgeous book, great story, one of those novels that both puts you inside the narrative’s landscape and makes you wish you really lived there at the same time.

Pain, Parties, Work – I <3 Sylvia Plath. This was an interesting account of what the author considers a defining summer for Plath, and while the research went off the rails a few times, the good bits made it worthwhile.

When You Reach Me – This is a book for middle-school kids, but its story, writing and characters are top notch. It was clever and suspenseful and rich. A Wrinkle in Time for the 21st century.

Me Before You – It depressed me, it made me ugly cry at the end, and I loved it.

Crazy Rich Asians – A silly romp, very much Jackie Collins for the super-wealthy Asian set. And I learned a lot about Singapore. At least, I think I did. The author could have been a big fat liar.

The Passage – A zombie story, except the monsters are strong, fast and kind of vampire-like, so the regular people were really, REALLY screwed. Long book but a fun read.

Fangirl – I tore through all three of Rainbow Rowell’s novels this year but Fangirl was my favorite. I think. Maybe it was Attachments. Or, hell, Eleanor & Park was really good… just read her stuff, ok?

Books I hated: The Chocolate War, Tampa, The Woman Upstairs, The Age of Miracles

I did lists for 2011 and 2012 but those lists appear to have vanished with the expiration of an old url. Such is live on the information superhighway.