A couple of weekends ago, we decided to take a mini road trip while we still had the rental car. We miss Florida already and the weather has been unbelievably gorgeous here, so Brighton Beach, a mere hour and a half away, seemed to be a natural choice. 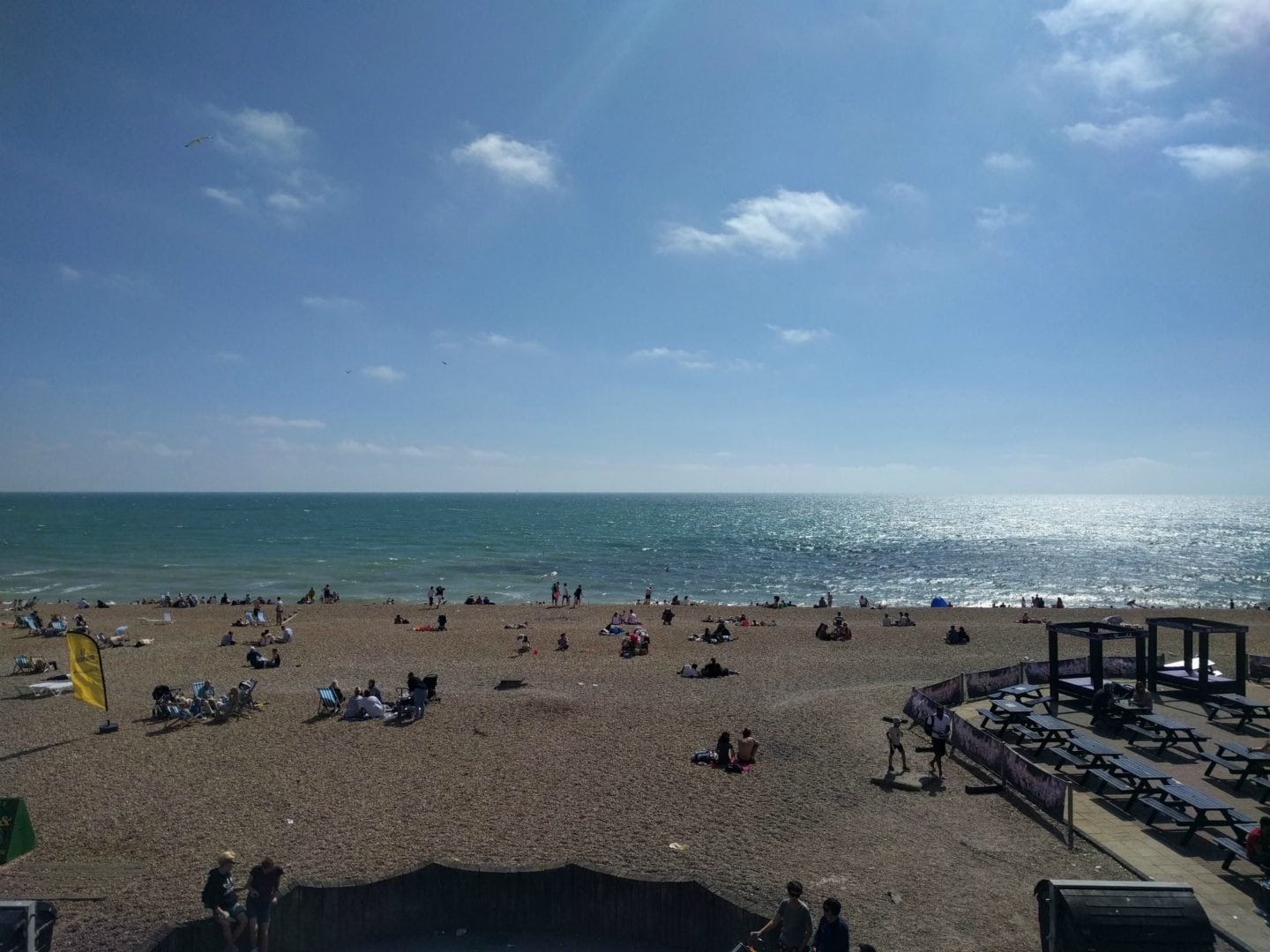 We started at the Regency Restaurant, a seafood place I read about in The Telegraph.

It was… okay. Really, really packed and all the side effects a crowded restaurant brings: harried servers, hard-to-find seats, long wait times. But how was the food? Also okay. I liked my prawns and chips fine. I’m squeamish about heads-on, but that’s my issue. 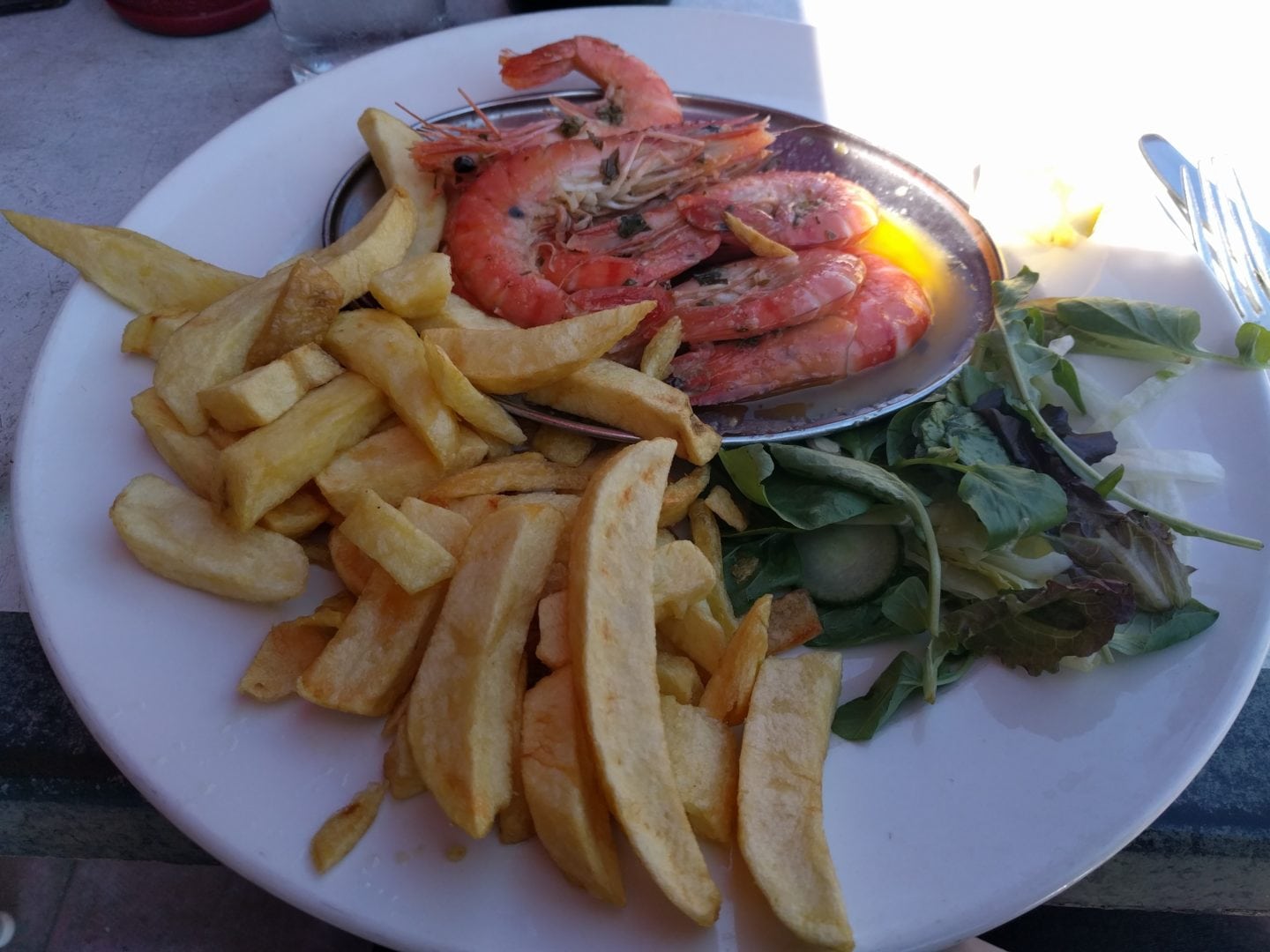 As far as Matt’s dish, I’ll just say it’s a special kind of love, to watch your husband order mussels and spaghetti at a seaside seafood restaurant and then complain it’s “too fishy.” 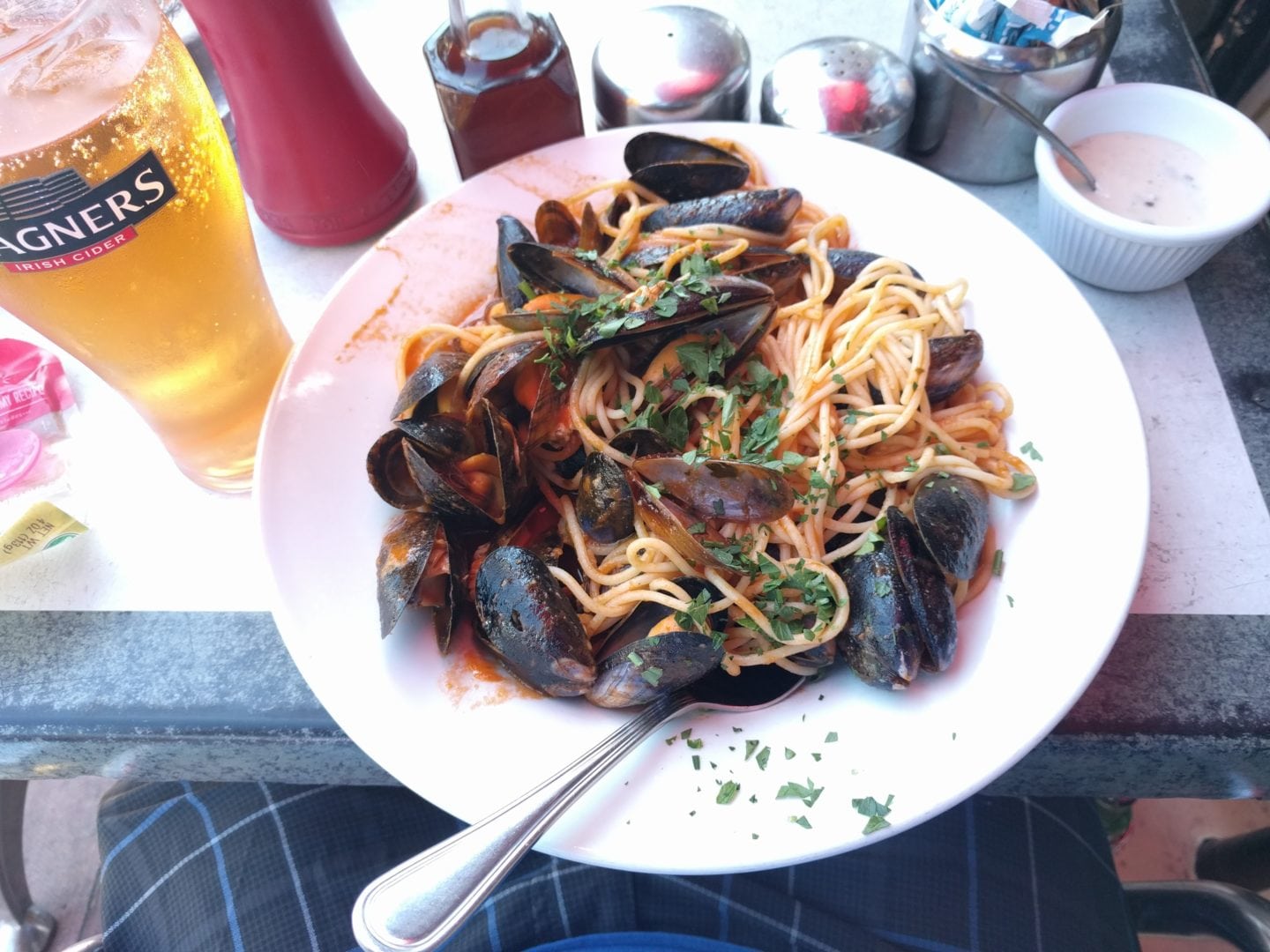 Then, we headed to the beach. Double boardwalks, super walking-friendly. Lots to see. 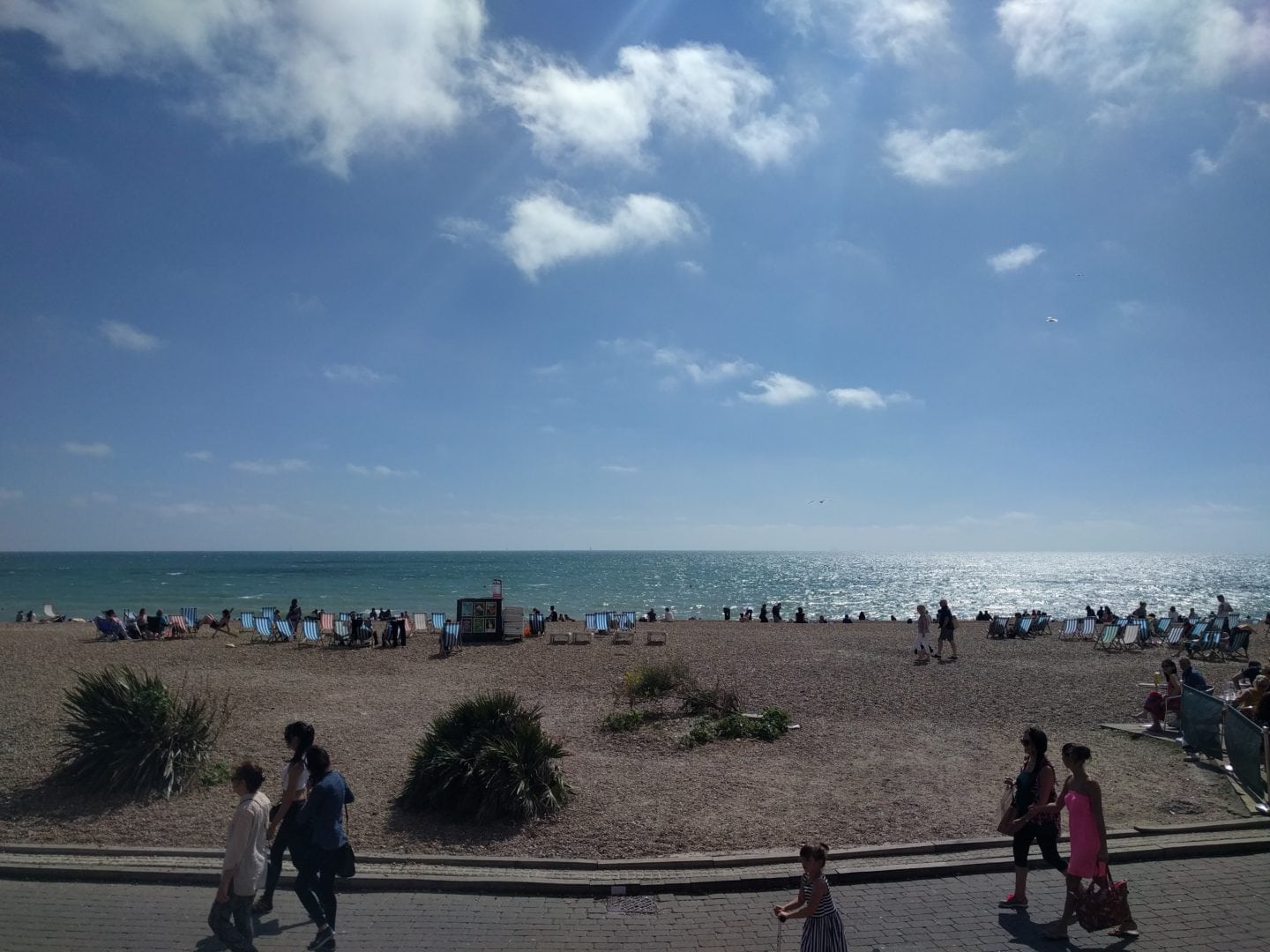 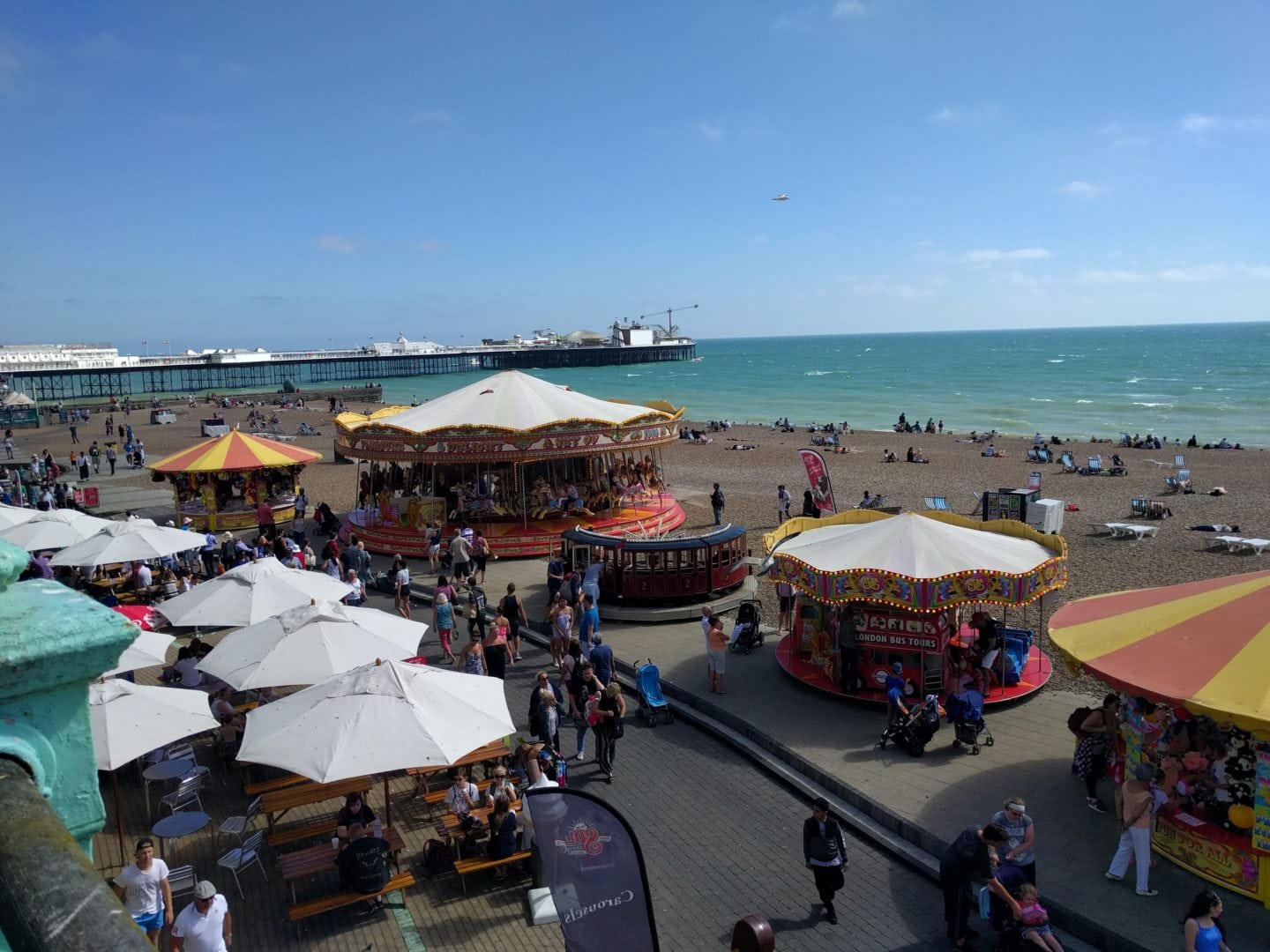 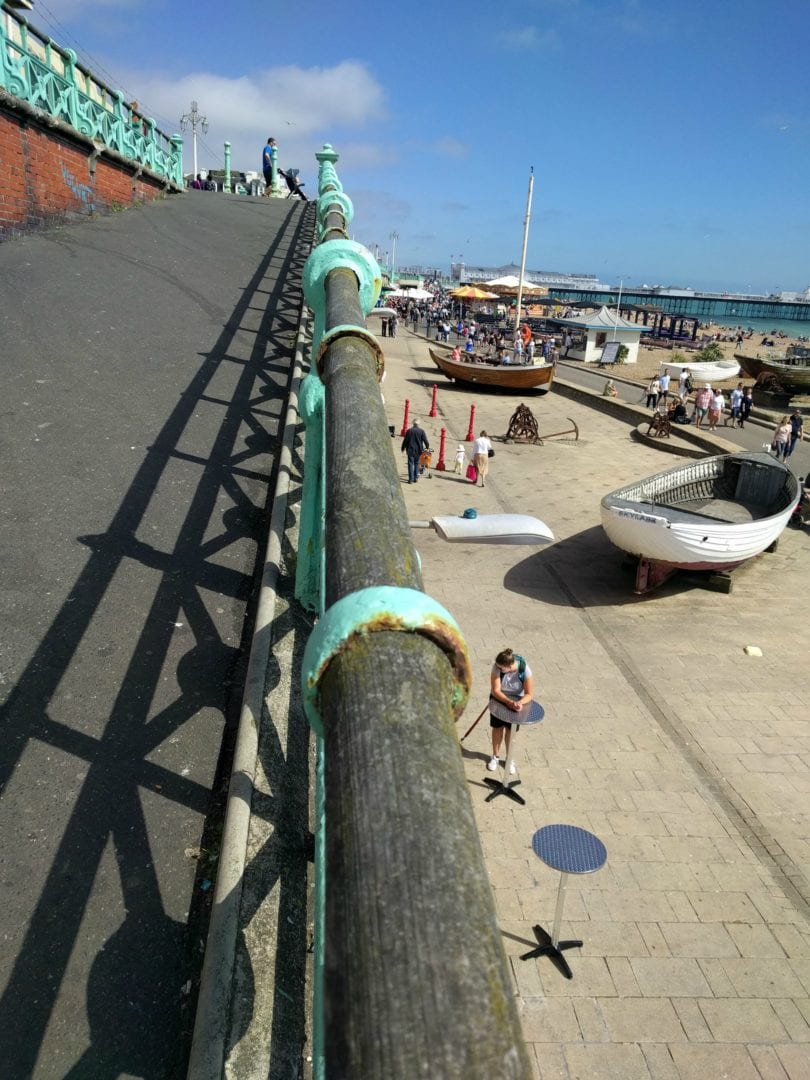 Recognize those two handsome gentlemen waiting for me at the top of the ramp? 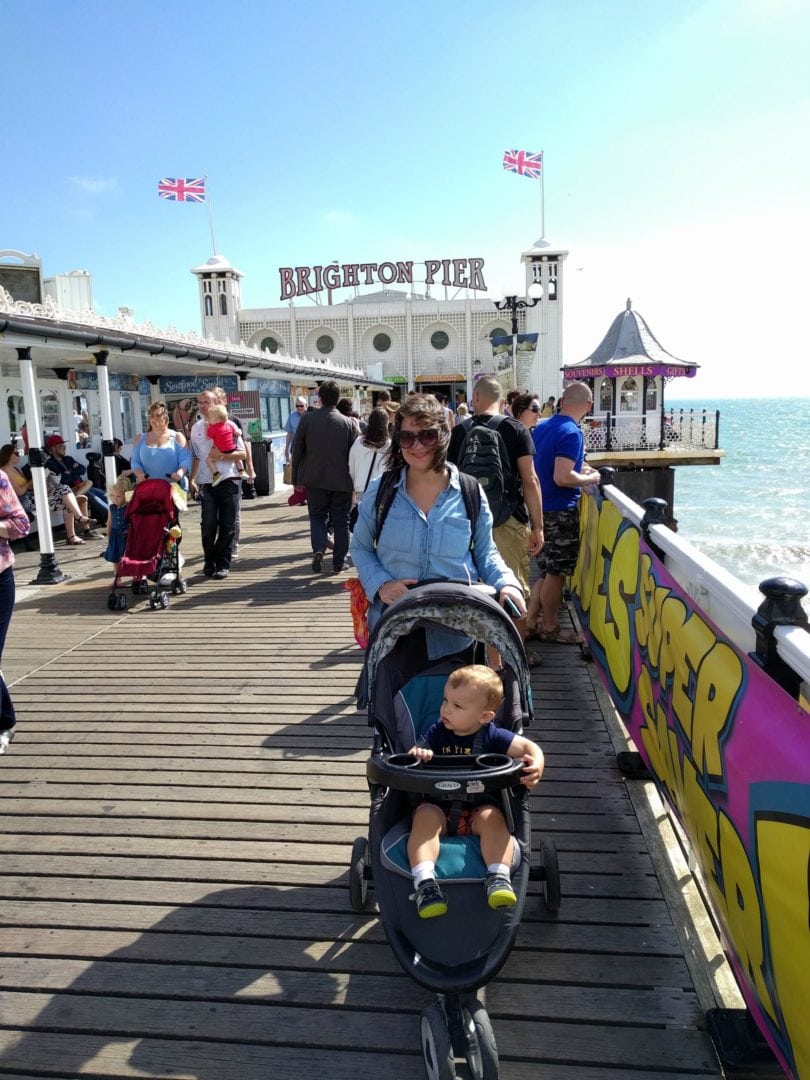 I rarely am in photos because I am usually taking photos, so I insisted Matt take this one in an attempt to be a part of this memory. Super windy, face covered in hair and couldn’t get Dexter to look anywhere near the camera. WE TRIED.

The views from the pier are great, though. 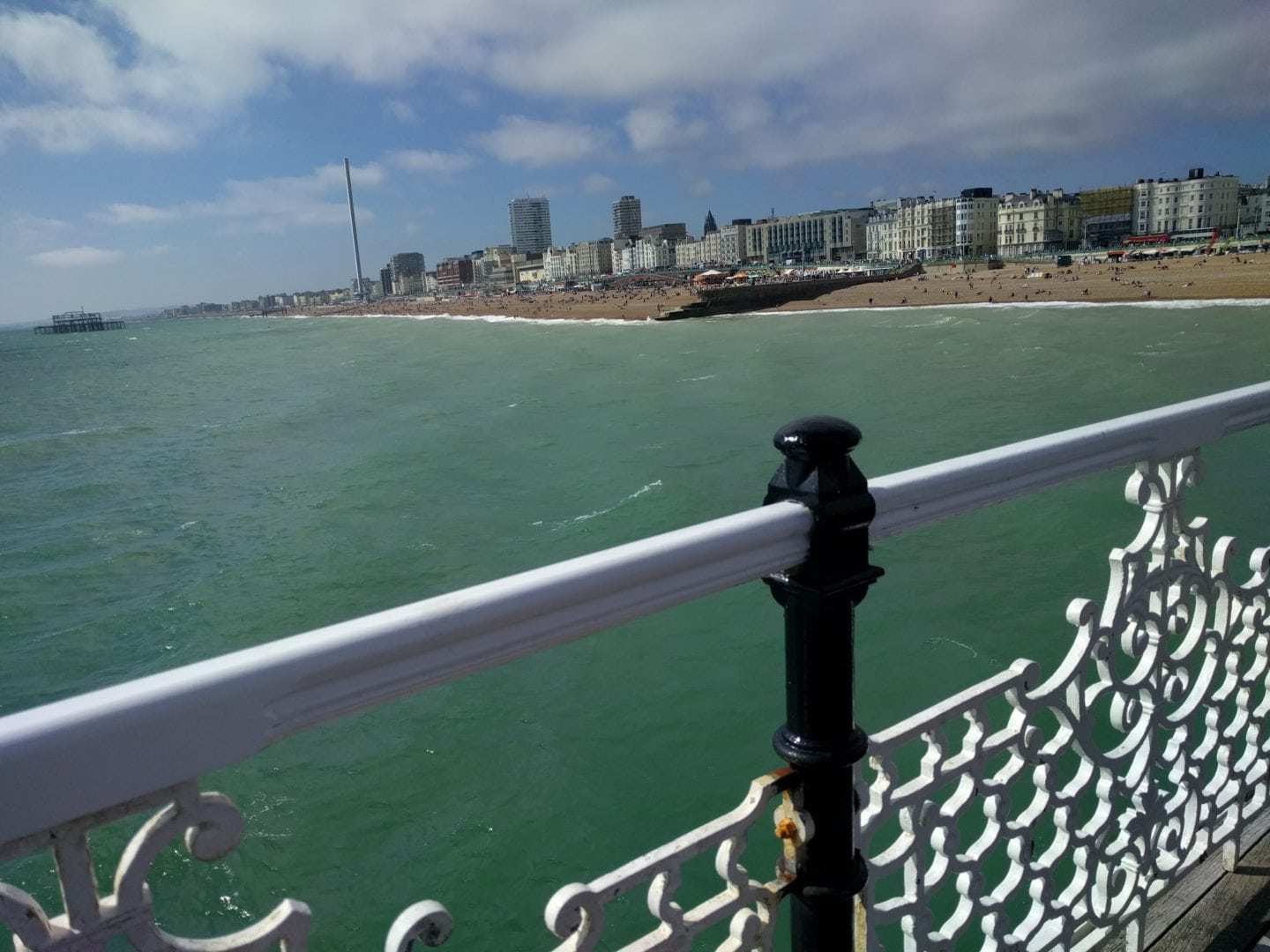 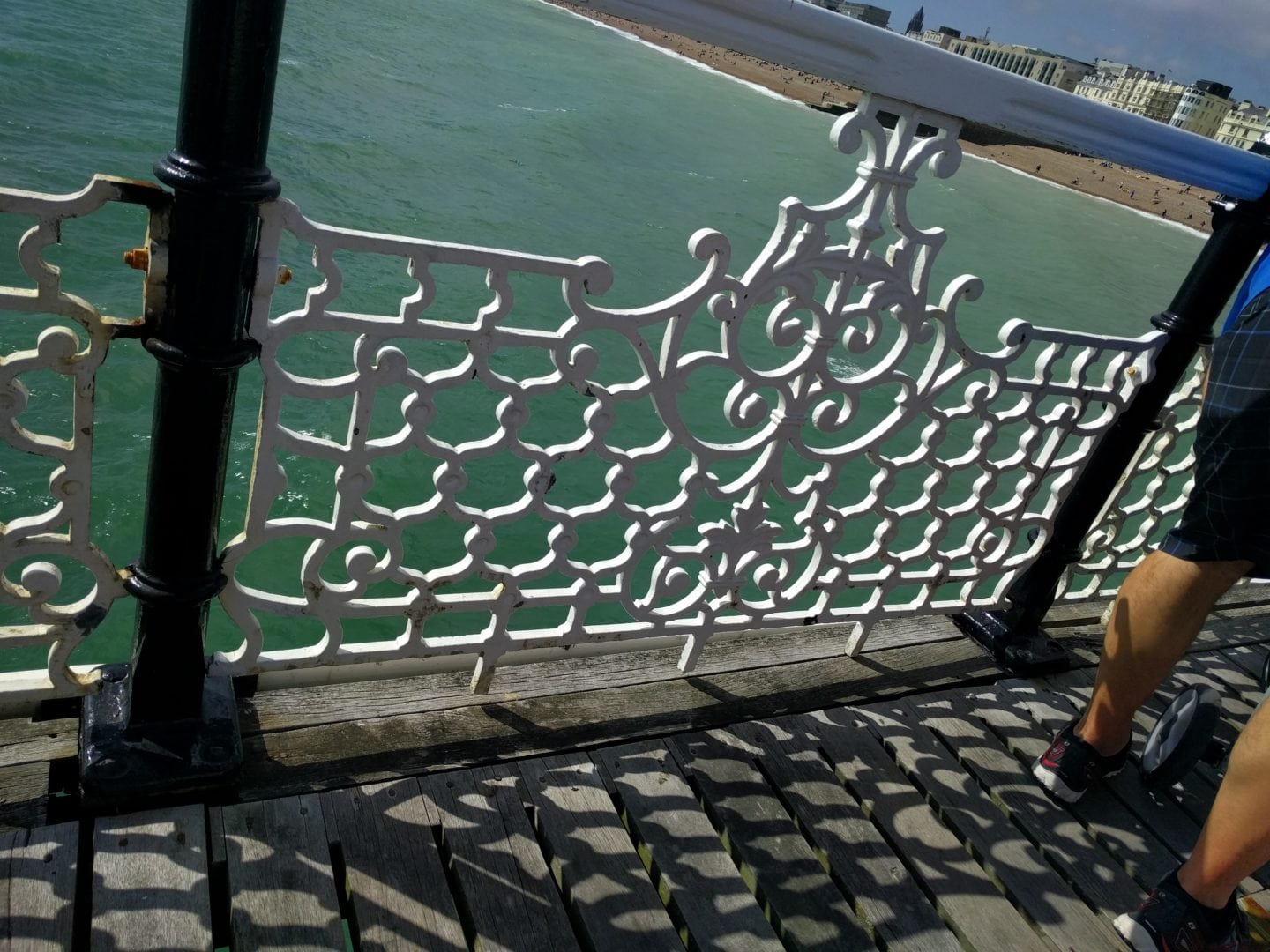 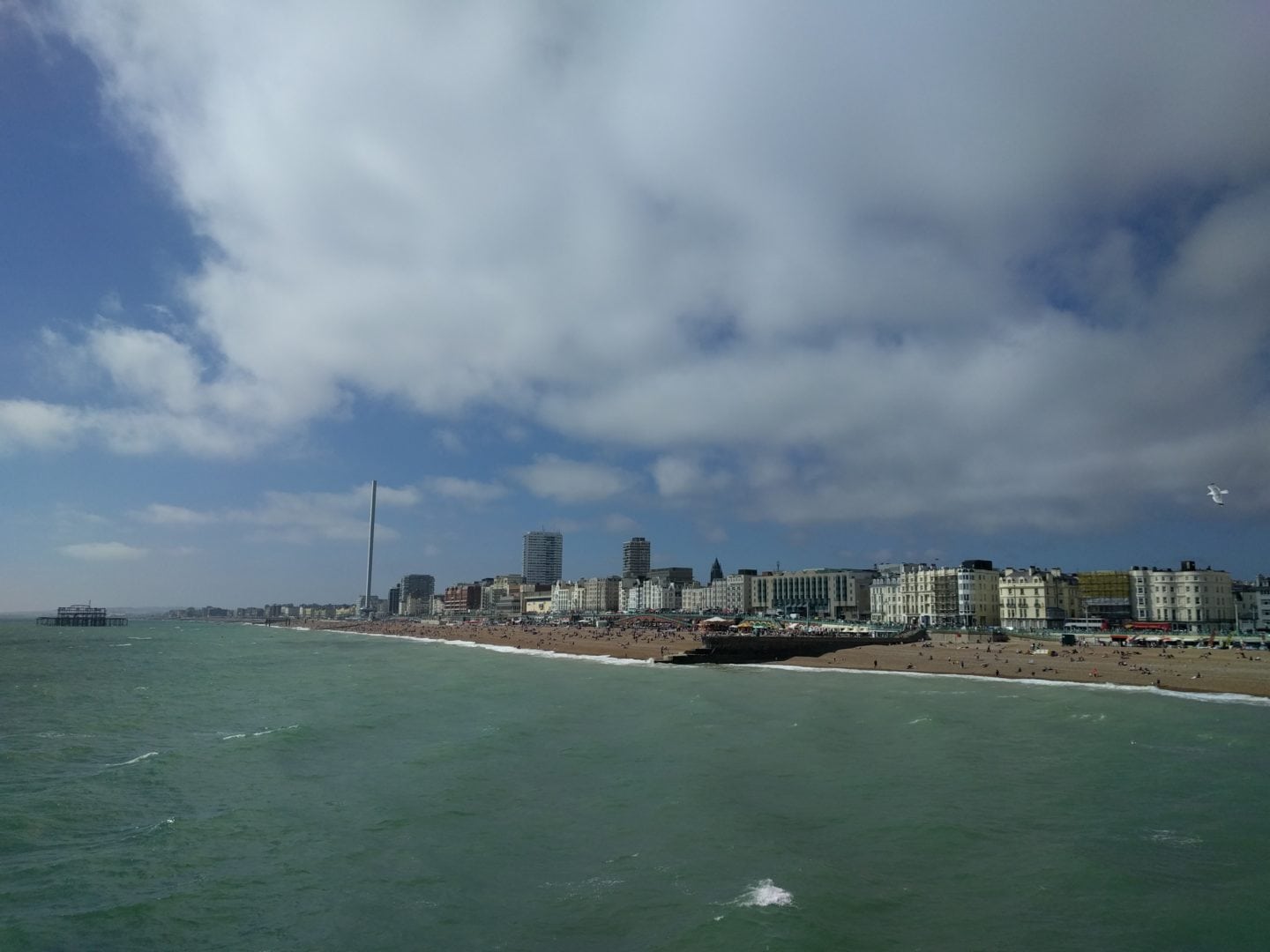 They have blue and white striped canvas beach chairs with posted invitations to help yourselves, which we thought was cool. Of course, it was beautiful and crowded that day so they all were taken. 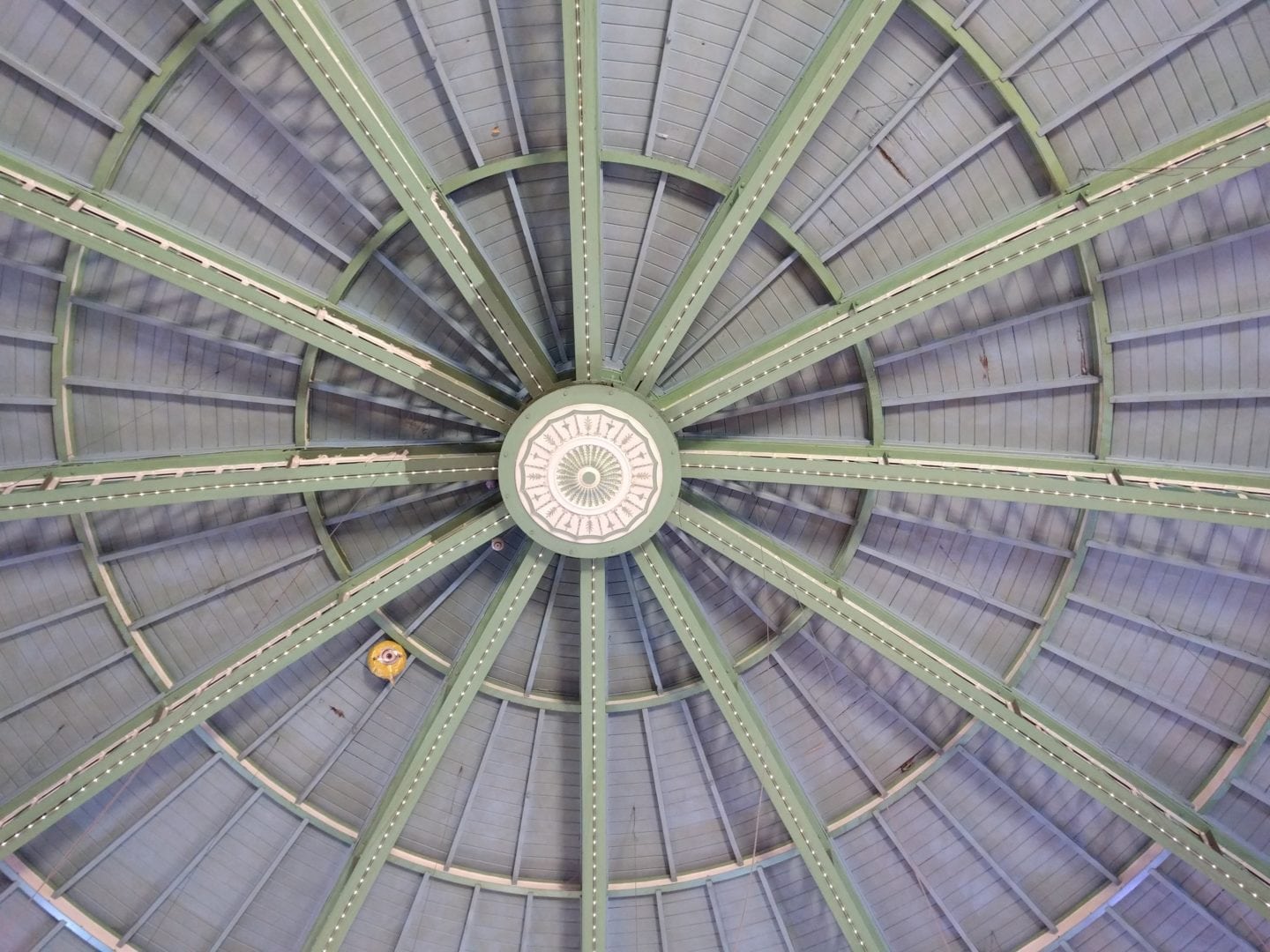 The arcade was a blast to check out, all kinds of crazy games and a real gambling casino area, but my favorite part was this unexpectedly gorgeous ceiling. I bet it’s spectacular lit up at night.

Quick tip: I was craving a crepe but all the ones on the pier were the same company and none of them had strawberries. Walked back toward the restaurant, which is near where we parked, and stopped in The Creperie along the way. SO GOOD. No photos, because by then we were in a rush to get back and I was literally eating and running but trust me – don’t bother with the pier crepes. Just go to The Creperie. 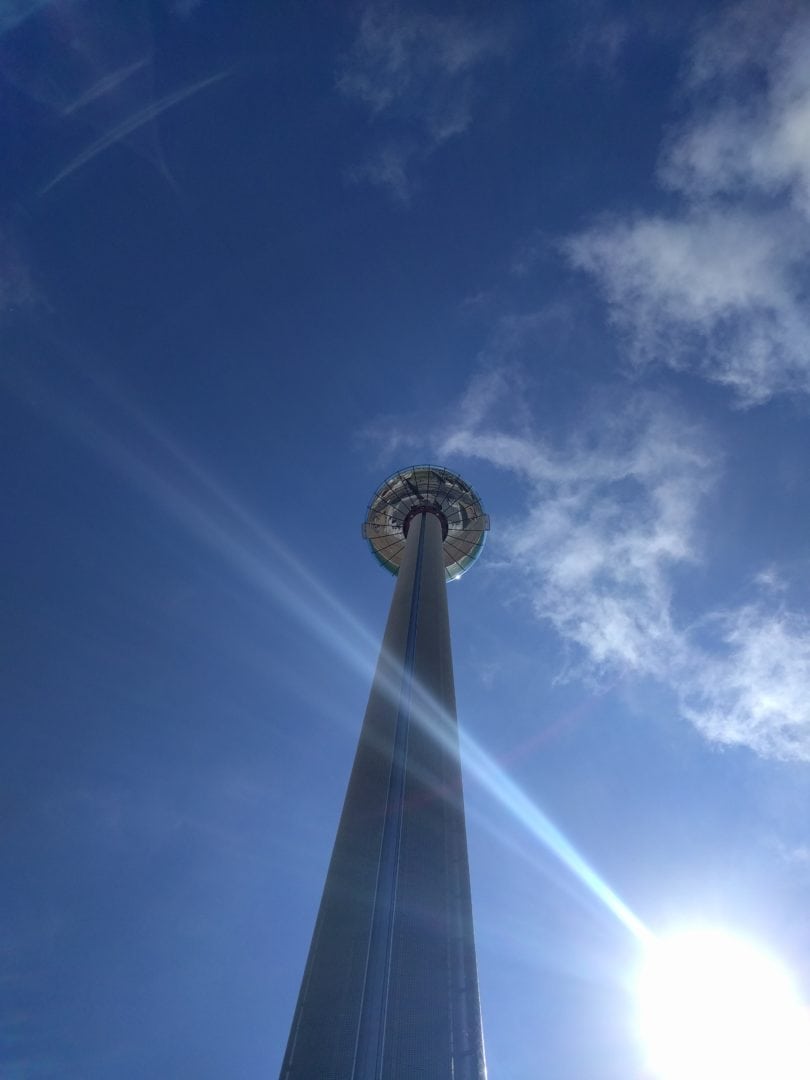 This is the British Airways i360, an observation tower. We didn’t go up, but this photo is noteworthy because I couldn’t see at all as I took it. Completely blinded by the sun. Still got a nice shot though, huh? 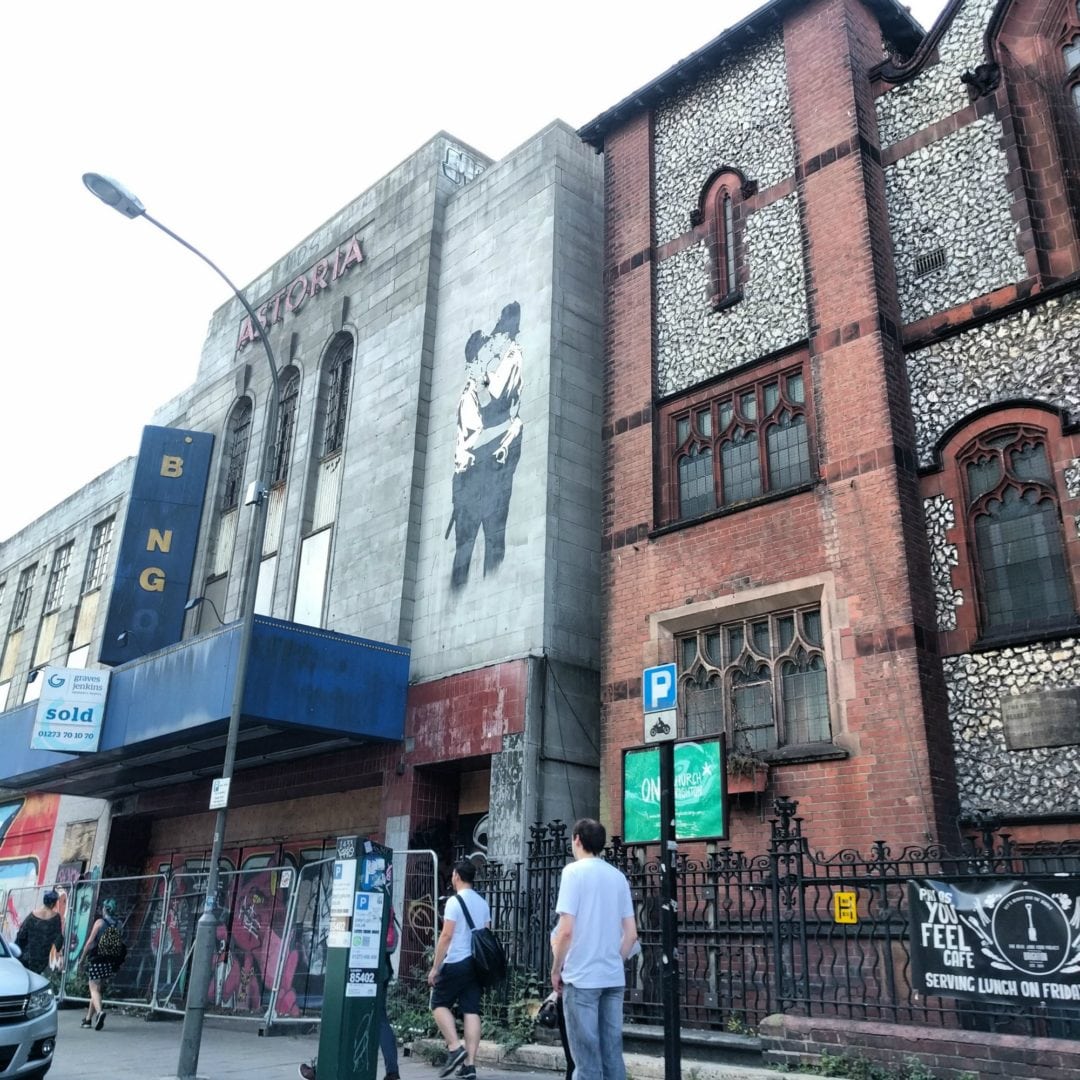 Spotted this on our way out of town and were briefly thrilled to have seen our first Banksy “in the wild,” until I thought about it. I’ve seen the kissing cops before and did not remember them being 1) so large or 2) front and center like that. A little googling later, and my suspicions were confirmed – it’s a replica. Rats.

We has a fun time exploring Brighton Beach, but I felt like we spent more time saying, “Next time, we should do that,” rather than doing things. (Such is life with a 16-month-old.) We did agree that it’s a spot that would be excellent fun to bring visitors, so we’ll be back. Come visit! We’ll take YOU! (And this time we’ll find a REAL Banksy.)