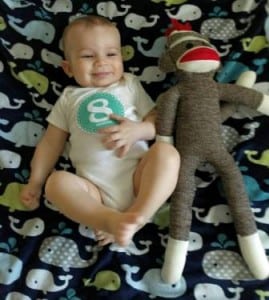 Dexter Ian is eight months old, officially as of December 10, but it turns out he already is hiding things from his parents at a 10th grade level. A week and a half ago, when I went to pick him up from daycare, Dex was hanging out in an odd place. The babies crawl all over, but it was an area I’d never seen a baby put down, so I asked his teacher, “Did you guys place him there or did he scoot there?” “Oh,” she replied casually. “He crawled there.” After I picked my jaw up off the floor I explained that his father and I were unaware our child could crawl since, you know, he’d never done it at home. It seems he’d been crawling at daycare for at least a week. We still haven’t been able to replicate the results and to this day, neither Matt nor I have witnessed Dexter crawling. Secret skills!

Ever since he left the newborn phase behind, Dexter hasn’t been the cuddliest kid, preferring to move and explore rather than to sit and snuggle. He’s starting to lean in on that a little, occasionally napping on my chest or relaxing into my lap while he gently touches my face or toys with a lock of my hair. Because I know his next developmental leap could erase these affectionate moments in an instant, I’ve been making a point to stop everything else and meet Dex halfway, breathing deeply, holding his fingers, drinking him in. As soon as he inevitably starts to wiggle, I pull him close and whisper in his ear. “Dexter! I love you. And I love being your mommy.”

And then I hand him the nearest bottle of vitamins so he can shake it like maracas.