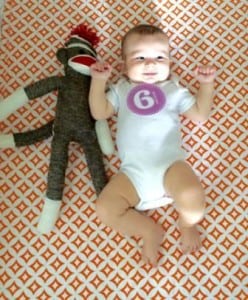 Dexter Ian is six months old today. Matt and I have been parents for a whole half of a year! The big news is he’s in daycare now, where he’s breaking hearts and you guessed it – refusing naps. The kid is a man of action and just doesn’t like to sleep. At this moment in time, though, nighttime is going pretty well. (Subject to change at whim of tiny human.)

Dexter’s favorite things are sweet potatoes, bouncing in his bouncer, chewing on everything and disarming his parents with the most handsome smile you’ve ever seen. He babbles and seems close to a word, so every time he makes word-like sounds Matt and I swoop in and start saying “Dada! Dada!” and “Mama! Mama!” in an effort to lobby the baby in his choice of first word, because of course, this is a competition. When this happens, Dex usually just smiles knowingly, like he’s thinking, “Damn, do I ever have these two wrapped around my finger.” 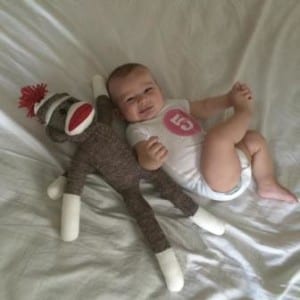 Dexter Ian is five months old today. In the past month he’s become more, well, dexterous. Matt and I observe developmental leaps just about daily, visible in the way he handles his toys and interacts with people. He laughs when we play his favorite games: “Oh No Mommy Dropped The Baby” and “Oh No Mommy Turned Into A Zombie And She’s Going To Eat Your Brains.”

Speaking of eating, we are trying out solids and Dexter has enjoyed a gourmet meal of runny oatmeal for two dinners now. Sleep continues to be an issue (I have him wrapped on me and am trying to get him to drop off as I type this) and it is extra challenging since he’s outgrown his bedside rocker and moved onto his crib. Matt and I have teamed up and made a plan and are determined to crack it, right in time for Dexter’s next developmental leap when we’ll have to start all over.

The other day, Dex was practicing barrel rolls on our bed and I turned to Matt and said, “I can’t believe we have this awesome baby. And he LIVES in our HOUSE.” My sister tells me that awed feeling never really goes away. I hope she’s right.